Physicists tend to attach simple names to extraordinary phenomena. Materials that allow electrons to conduct with no resistance, no dissipation, are called “superconductors.” The dissipationless movement of electrons has a radical implication; once the electrons start traveling, they will never stop until the superconducting state is broken. That’s how “super” these conductors are. 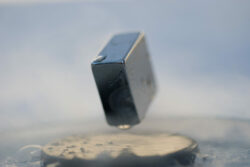 The superconducting state was brought about in an unusual way, with researchers applying a magnetic field along the direction of the carbon sheets. Courtesy of Wikimedia Commons

This work goes beyond the superconductivity of BBG and details extensive measurements done by the group to understand how the electrons are behaving under a wide variety of experimental conditions. The researchers saw how the resistance of their device changed with increasing the out-of-plane magnetic field.

“We implemented this (widely used) technique … and found that mapping out how the … frequencies continuously changes with charge carrier density is very helpful in understanding the electronic properties,” Dr. Haoxin Zhou said, who is a postdoctoral researcher at Caltech and the first author of the work. These changes correspond to what quantum states the electrons are occupying, all leading to an understanding of what symmetries the BBG is preserving.

Earlier works have shown graphene to superconduct under the right experimental conditions. This paper stands apart from the other experiments because the Young lab was able to get the ground state of the graphene system to demonstrate superconductivity. A ground state is the lowest energy state of a system, and thus, most favorable for the system to arrange itself. A ball sitting at the bottom of a bowl is in its ground state. If you push the ball away, the ball will return to the bottom of the bowl.

For the UCSB researchers, having a superconducting ground state allowed them to subject the sample to a battery of experimental conditions without destroying the sample. “It’s pretty exciting to have something much more flexible. To not just show that it superconducts, but to understand why,” Caitlin Patterson, a UCSB physics doctoral student and co-author on the report, said.

The UCSB researchers are optimistic that others will try to replicate their superconducting result, and maybe use this newly discovered behavior in a future graphene device. Other groups have already posted replications of the UCSB superconducting result on the preprint library arXiv. In addition, the Young lab hopes BBG will serve as a stable platform to investigate all the novel phenomena it hosts.

“[T]he main difference is that BBG is simple and stable. It is the second simplest graphene system that stably exists in the world… [I]t can be used as a platform to expand the knowledge of the general theory of superconductivity,” Zhou said. Because of BBG’s reliability and availability, the UCSB researchers believe that groups around the world will soon start incorporating the material into complex quantum circuitry.

“[BBG] is actually very reproducible. You can actually think about making applications without wondering if it superconducts or not,” Ludwig Holleis, a UCSB physics doctoral student and the second author on the paper, said.

When asked to reflect on the impact of their recent publication, the Young lab had much to say. “Graphene is still the wonder material … With bare graphene, you have superconductivity and magnetism … all the Dirac physics, all the quantum Hall physics in one material,” Holleis said.