The Daily Nexus
Science & Tech
Living on the Margins: Shrinking Forest Footprints in the Future American West
February 9, 2022 at 2:13 pm by Sean Crommelin

Although plants are most well known for photosynthesis, the process in which the happy combination of sunlight, water and carbon dioxide is transformed into sugar and oxygen for the plants to use means that they also “breathe,” just like animals. Through cellular respiration, plants break down sugar to use as energy while releasing carbon dioxide as a byproduct, in addition to water. 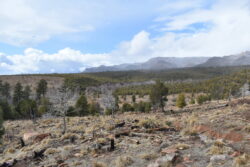 The researchers were able to see how carbon balance may influence the distribution of plants. Sean Crommelin / Daily Nexus

Climate and the availability of water have a big impact on foundational processes like photosynthesis and cellular respiration. Conditions which are too hot or dry, for instance — prompting drought stress in plants — can inhibit photosynthesis.

Assistant professor Anna Trugman and postdoctoral scholar Justin Mathias, two researchers in the UC Santa Barbara Department of Geography, have conducted much research with the aim of better understanding how forests — and particularly the carbon use efficiency of forests — will respond to the warming and drying conditions seen in the West.

But first, what is carbon use efficiency?

The term used to quantify the carbon use efficiency of plants is carbon balance, according to Trugman.

“So just like you and I, where we respire and make carbon dioxide, plants do the same thing to maintain their general function. So that’s what primary productivity is. And so carbon balance is the balance to grow after the cost that they have to cover for general functioning,” Trugman said.

Thus, a positive carbon balance is one wherein there is a net gain of carbon fixed during the combined processes of photosynthesis and cellular respiration, allowing for growth. Anything below that will negatively impact plants. A plant locked in a negative carbon balance for an extended period of time will become more susceptible to disease and other stressors. Eventually, it will die.

As the weather whiplash of the Western states intensifies under climate change, concerns over the health of Western forests — which provide innumerable benefits to human beings — have continued to grow. Research into how forests will respond to warming has become more and more prominent.

Trugman and Mathias’ new research lies firmly in this niche.

“We wanted to understand the uncertainty associated with this respiration sensitivity to temperature and how it affected our understanding of plant carbon balance and tree distribution,” Trugman said.

In order to accomplish this, the researchers used a plant physiological model and ran it under future climate scenarios. However, they needed to validate this.

In addition to this, the researchers looked at vegetation canopy height data measured using LIDAR, an “airborne remote sensing system.”

What they found was exciting from a research standpoint, according to Trugman. Their model that they used to look at future carbon use efficiency was also compatible with the existing geographic range limits of forests in the West. By looking at the spatial distribution of existing transition zones between forest canopies and more sparse or low-lying plant communities like shubland, the researchers were able to see how the carbon balance of those particular areas may influence the distribution of plants.

“These range edge components really emerged as a very interesting component of the model that was quite unexpected, while we were trying to validate our model,” Trugman said.

“We used the model to see what the carbon balance of those particular [areas] would be given our knowledge of the climate, and we saw particularly at dry range edges, this really sharp transition from a reasonable carbon use efficiency to one that went to zero and then potentially negative, indicating that you really couldn’t get a tree to exist in those locations,” Trugman said.

With this, the researchers found that — if the models are correct — while the carbon use efficiency of core forest areas will increase, the area of forest cover along dry range edges will actually decrease markedly.

“I guess the message would be there’s actually a pretty nuanced response, potentially, to how we might see more ecosystems affected by climate change,” Trugman said.