The Daily Nexus
News
UCSB Moot Court Wins National Championship for One Category, Places Fourth in Another
February 5, 2022 at 5:43 pm by Lian Benasuly 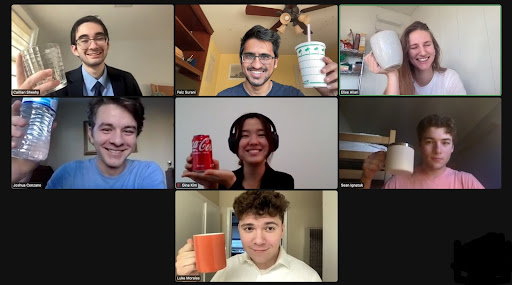 UCSB Moot Court is currently made up of 11 members, and most of the members who participated in the oral argument national championship were new to moot court. Screenshot taken from UCSB Moot Court Zoom meeting.

“It’s a big hurdle just to make it to nationals, so it was really exciting for our program to get three teams there,” said UCSB Moot Court Co-President and fourth-year political science and art history major Elise Allari.

UCSB’s team is entirely student-run and has been quite successful since its founding in 2019, according to Surani.

“We started it basically the second I stepped foot on campus, and it’s been a lot of fun to really see it grow into quite a successful organization,” Surani said.

Finance Director and third-year political science major Caillian Sheehy said that although there is value to having professors lead moot court teams, UCSB’s team has benefited from being student-run.

“I think being student-run is one of our program’s biggest strengths. We’re almost like the underdogs. Having a group of people that are working alongside you motivates people to work together to move forward,” Sheehy said.

UCSB Moot Court is currently made up of 11 members, and most of the members who participated in the oral argument national championship were new to moot court.

“Other than one person, everyone [in the oral argument category] was a first-year competitor at moot court, so it’s huge that we got this far and everyone got this experience,” Allari said.

Allari, a senior at UCSB, experienced her last national championship this weekend and said that witnessing her moot court team’s growth over the years has had a big impact on her college experience.

“I’m very proud of this team and what has happened over three years. We’ve had rapid growth in our level of skills. There’s a level of pride there,” Allari said.