The UC Santa Barbara Library dispersed free copies of “Exhalation” by Ted Chiang in front of the library on Feb. 1 to kick off the 2022 UCSB Reads program, an annual university program highlighting a specific book over the course of several months through panels, discussions and screenings. 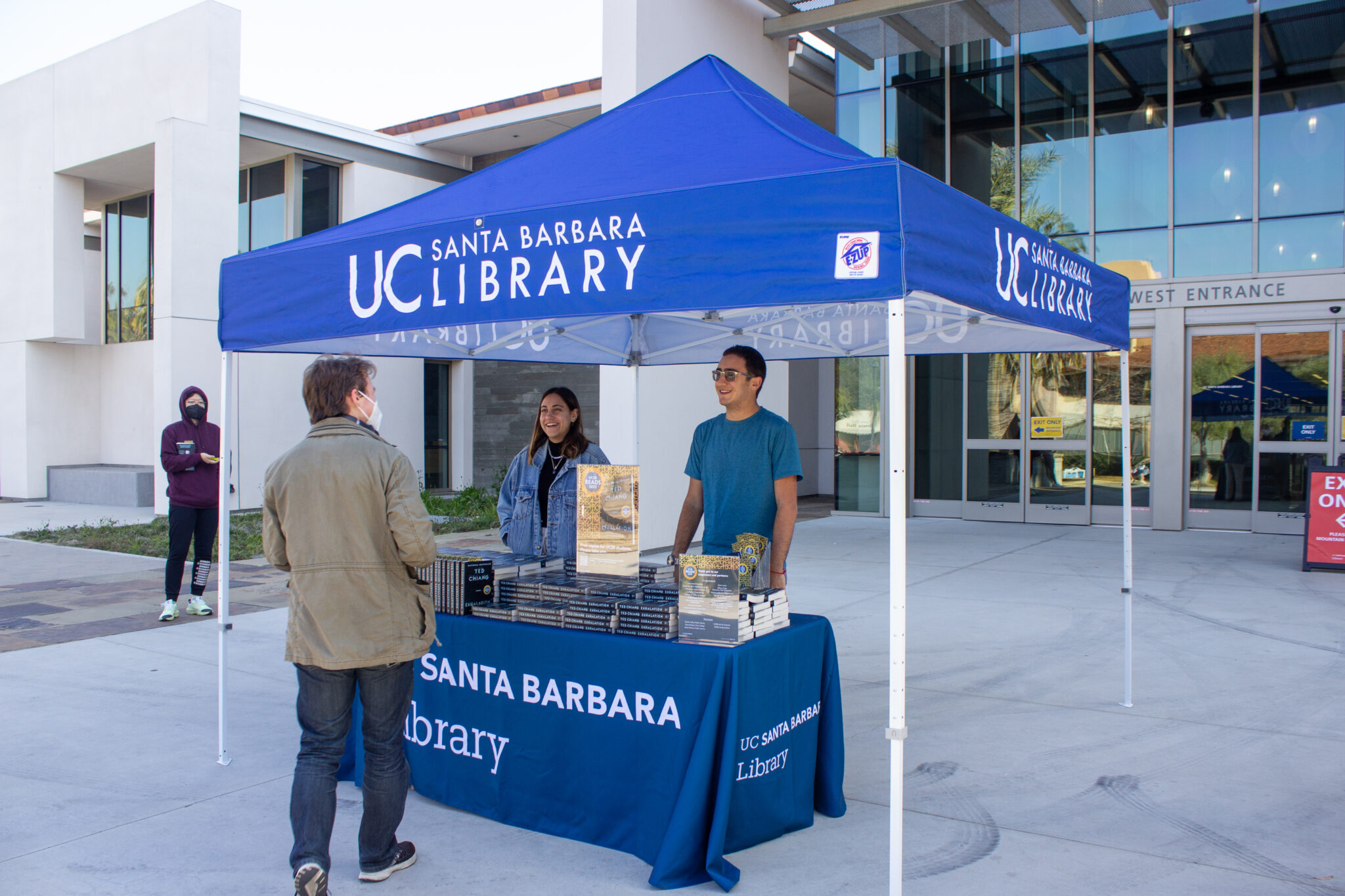 Regan said that the goal of the UCSB Reads program is to spark discussion across the campus community and across various fields of study. Meiru Han / Daily Nexus

The featured novel of this year’s UCSB Reads program is “Exhalation,” an anthology of nine short science fiction stories that cover themes of “free will, fate, bioethics, time travel, virtual reality, cyborgs, and artificial intelligence,” according to the UCSB Reads website.

Hannah Rael, communications and marketing manager at the library and event staffer, said that the giveaway is the first of a number of events in the 2022 UCSB Reads program, culminating in an in-person discussion with author Chiang in Campbell Hall on May 10.

“The goal of the whole program is that we can have a conversation with the whole campus that’s open to anyone from any major to talk about the themes in the book,” Rael said. “By giving the books away, that helps us have a better reach through the campus and makes it easier for people to access the book.”

According to Alex Regan, events and exhibitions librarian, UCSB Reads — which will celebrate its 16th anniversary this year — occurs annually and features a different book every year. A committee made up of UCSB faculty, staff and students, as well as community members from nearby libraries, meet to discuss and settle upon a book to highlight prior to the program’s launch.

Along with having designated events for discussing “Exhalation,” the book has also been incorporated into several university courses this quarter, including computer science, religion, philosophy and English classes, Regan said.

“I think the committee was really struck by a number of things [when choosing ‘Exhalation’]. One, we’ve never had a book of short stories for [UCSB Reads], so that was one thing that really appealed to us.” Regan said. “We also felt like the stories could be incorporated in a lot of different classes — in S.T.E.M. classes but also English classes. It’s proved to be a pretty good pick. We even have a painting class that is reading the book and then creating paintings in response to some of the stories.”

Regan said that the goal of the UCSB Reads program is to spark discussion across the campus community and across various fields of study.

“The intent is really to bring people from across campus and across different disciplines to come together, talk about these ideas, all be reading the same book and hopefully show up to the programming and come to the author talk. So, it’s really a community building event,” Regan said.