This past Friday, Jan. 28, Morganfield Burnett & Da Blues brought their old-fashioned New Orleans-inspired unique fusion of jazz, blues, soul and Americana straight to a pop-up show on Pardall Road in the heart of Isla Vista. 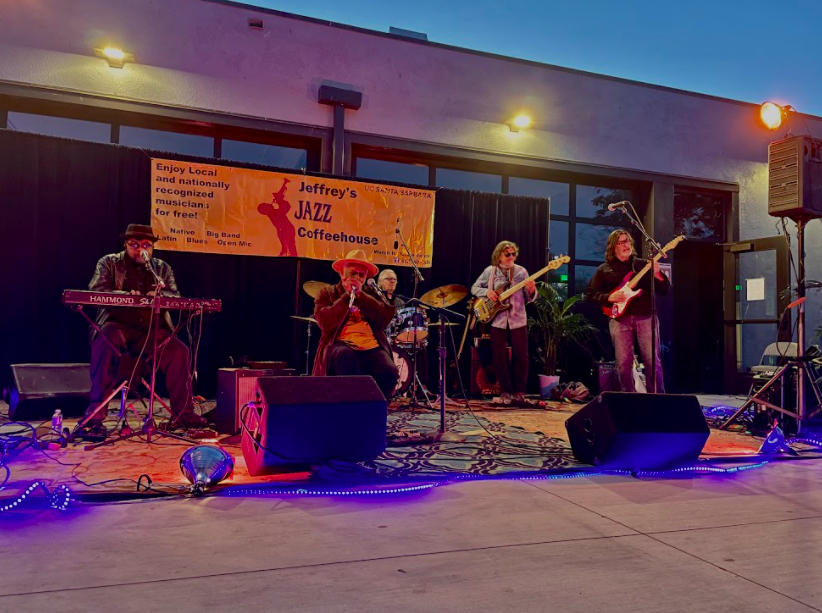 Sponsored by professor Jeffrey Stewart of the Department of Black Studies at UC Santa Barbara, this event was part of “Jeffrey’s Jazz Coffeehouse,” a series formed in 2015 of ongoing free performances by local and nationally acclaimed musicians performing jazz. Designed to show support and care from university faculty to students and the Isla Vista community, “Jeffrey’s Jazz Coffeehouse” brings together members of the community to experience the joys of jazz music and cultural intersection.

Morganfield Burnett, born Larry Edwards, led the group with his euphonious voice and electric harmonica. Born in Texas, Burnett is nevertheless a Santa Barbara local, having spent most of his life and musical career in Santa Barbara and the greater Southern California area.

The band, consisting of Dave Melton on the guitar, Randy Tico on the bass, Tony Braunagel on the drums and Mo Beeks on the keyboard, have played numerous venues in Santa Barbara under Burnett’s direction. The members have also performed separately with other renowned acts like Taj Mahal.

Soft lighting, socially distanced chairs and free pizza made the evening event cozy and comfortable as around 30 to 40 attendees trickled in slowly. Though many audience members were students in Stewart’s History of Jazz class, there were also other students, local I.V. residents and faculty members in attendance.

Though Burnett led the band through their three-hour-long set, each member of the group had their time to shine. They warmed up the crowd with two songs sung by Burnett, who heavily featured his gritty harmonica abilities. After a brief introduction to the band, they dived into performing what Burnett referred to as “the real deal” — unrehearsed yet musically polished renditions of classic blues jazz tunes.

Melton and Beeks also sang on numerous pieces, their voices distinct yet with the same soul-infused lilt. Melton’s singing featured on the songs “Early in the Morning” and “Nothin’ But the Blues,” two dynamic songs that were jam-packed with solos all around and plenty of smooth musical luster.

Besides his sweeping keyboard virtuoso, Beeks also demonstrated his musical abilities singing “If You Love Me Like You Say” and “Baby, Please Come Back to Me.” Glissandos, ostinatos and vibrant improvised harmonies abounded in his keyboard techniques, and the melodies shined through the cohesion of the band.

By the end of the night, Morganfield Burnett & Da Blues had the crowd on their feet dancing to songs like “Nadine” by Chuck Berry, who Burnett slammed as a “horrible person.” Closing with an original song by Morganfield Burnett, the band brought the night to a whimsical end.