UC Santa Barbara has had six Nobel laureate professors since the 1990s — and for the first time in UCSB’s history, one of the six medals was auctioned off for $457,531. 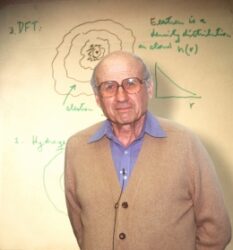 Walter Kohn, a deceased UC Santa Barbara physics professor, won the Nobel Prize in chemistry in 1998 while working at UCSB for developing the density-functional theory, which is used to “calculate the electronic structure of atoms, molecules, and solids,” according to ScienceDirect. Kohn died in 2016 at 93 years old.

The auction also included three books — ”A Course of Pure Mathematics,” ”Dent’s Modern Science Series”  and ”Properties of Matter” — that Kohn had collected while living in a Canadian refugee camp as a child, according to the Santa Barbara Independent.

Kohn was born in Vienna, Austria, in 1923 and was a 15-year-old Jewish teenager during Kristallnacht — the Night of Broken Glass on Nov. 9 and 10, 1938 — when German Nazi forces torched, vandalized and destroyed Jewish synagogues, schools, homes and businesses and killed 100 Jewish people.

Kohn and his sister Minna were relocated to Great Britain through Kindertransport — a program that relocated Jewish children in the aftermath of Kristallnacht. Later, Kohn moved to a Canadian refugee camp. Though Minna and Kohn managed to escape, both of their parents — Gittel and Salomon — were killed at the Auschwitz death camp during the Holocaust.

At age 56, Kohn came to UCSB in 1979 and became the founding director of UCSB’s Kavli Institute for Theoretical Physics. Kohn was the first of a current total of six faculty members at UCSB to receive a Nobel Prize. In 1998, Kohn went to Copenhagen, Denmark, to receive his Nobel Prize in chemistry.

Kohn passed away on April 19, 2016. Chancellor Henry T. Yang issued the following statement through the UCSB Current upon Kohn’s passing.

“Walter’s friendship has been a gift to me personally as well as to our entire campus community,” Yang said. “Though he is no longer with us, he has left a living and lasting legacy through his inspiration and impact, which is beyond anything I could adequately put into words.”

For Nate D. Sanders Auctions, Kohn’s medal is not the first Nobel Prize medal to be auctioned off. In fact, the group has auctioned off around 10 other Nobel laureate medals in the last seven years, according to spokesperson Sam Heller.

“[We] just have a reputation for selling out the [medals]. People pass away and the family wants someone else to be able to cherish the Nobel Prize and medals,” Heller said.

Nate Sanders, of Nate D. Sanders Auctions, said that Kohn’s Nobel Prize in chemistry “is not only a testament to the knowledge that mankind is capable of, but also to its humanity.”

“To think what would have been lost to the world had Walter Kohn not made it to the UK during WWII is incomprehensible,” Sanders said in a statement to the Nexus. “This Nobel Prize is not only a testament to the knowledge that mankind is capable of, but also to its humanity.”