The Daily Nexus
Features & Essays
UCSB Library Hosts Beyond The Wall: The Prison Art Resistance Exhibit
January 28, 2022 at 10:47 am by Emilie Risha

The UC Santa Barbara Library hosted the Gaucho Underground Scholars Program on Jan. 19 for an online opening event and curator discussion of their exhibit, Beyond The Wall: The Prison Art Resistance.

Available for viewing online and in the library’s mountain gallery from Jan. 18 to July 2, the exhibit highlights the lives of incarcerated people through their art and brings awareness to the importance of art as a way to process trauma. 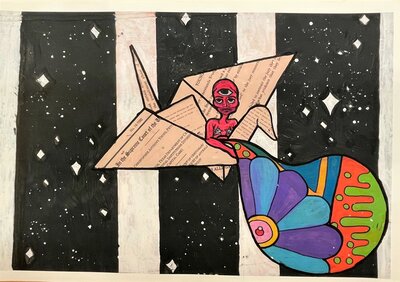 Courtesy of “Beyond The Wall” virtual exhibit

Bran-Gudiel serves on the board of directors for Alpha Alpha Alpha, a first-generation honor society at UCSB, and is the Gaucho Underground Scholars Program (GUS) recruitment coordinator.

“We [the GUS] are an organization that provides critical guidance and support to formerly incarcerated and system-impacted individuals here at UCSB and in the community colleges, and in high school and other institutions,” Bran-Gudiel said. “We do this through the three main pillars of recruitment, retention and advocacy, creating this prison to school pipeline.”

Rising emphasized that the GUS collectively curated the exhibition to support pathways into higher education and upward mobility for formerly incarcerated individuals instead of recidivism.

“Do we want a homicidal, drug-addicted individual dealing with serious mental illness issues that were created by a dehumanizing prison industrial complex?” Rising said. “Or do we want an artistic, social justice-driven educated individual to come home and be our neighbor?”

The exhibit promotes the latter reality of incarcerated individuals.

“We’re all trying to get as much art as we can from all of our incarcerated community members,” Rising said. “We are wasting human capital by warehousing these individuals, and enough is enough. We stand here today to show you the talent that exists.”

The 22 visual art pieces of the exhibit are themselves an act of resistance sourced from unlikely materials.

“Incarcerated individuals are not provided with art supplies and the kinds of materials you would find in an art classroom,” Vértiz said when introducing the Lowrider truck and the Santa Muerte pieces.

“The Lowrider truck is made with chit bags that are given to us in our lunches, bags that go around the bread and homemade ink that’s extracted out of magazines [and] mixed with a little bit of soap,” Rising said.

The Santa Muerte piece was created using a type of airbrush paint on bed-sheet canvas, for which self-taught artist Luis Martinez fashioned a sewing needle from a paperclip, and used thread pulled from clothing.

“You can pull a whole bunch of thread out of your boxers, and anything that has ink in it, [ink] can be extracted out with water,” Rising said.

With access to pens, Martinez made his own airbrush tool to create the piece, which features the cell number that he and Rising shared, among other deeply personal imagery.

Practically said, art is a way to survive for incarcerated individuals, connecting them to a community, as well as providing necessities like hygiene products and better meal options.

“They [the prison industrial complex] don’t give deodorant, they don’t give toothpaste — it’s still having to be bought inside there,” Rising said. “This [art] is a way to eat the top ramen soups, the biggest item on the incarcerated individual’s diet.”

Bran-Gudiel said that beyond providing physical means, creating art serves as an outlet for incarcerated and formerly incarcerated individuals.

“We’re forced to be called minority, and we’re marginalized and criminalized, so this is a way for us, even through the prison system, to release that trauma and that pain — a way to escape those enclosed four walls,” Bran-Gudiel said. “It’s a reality that you dream of.” 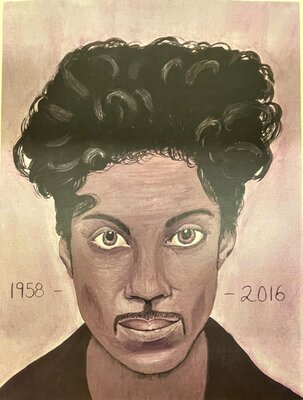 Courtesy of “Beyond The Wall” virtual exhibit

The dream is real for Murillo, who discussed how experiencing art around him and creating provided continual motivation for his achievements.

“I would listen to a lot of Wu-Tang, Immortal Technique and Dead Prez, so I incorporated both of them and it became like escapism, but at the same time it helped me to reflect,” Murillo said. “The whole time I was doing art, I would ask myself, ‘Can I be great? Can I be greater than great at this very moment?’”

Through art, Murillo said he maintained his humanity, came to understand his reality and found himself currently studying at the university level.

“I started understanding that there is a larger segregation within the carceral system between race and culture and why we cannot be friends, why we cannot co-relate, why we cannot share art, why we cannot talk about art in the sense of being collective resistance against a state apparatuses which would be the prison, where people are actually criminalized to draw art that represent their culture,” Murillo said. “[If you have certain kinds of art] that represents your culture, you’ll be labeled as a criminal gang offense or a gang prisoner. For me, art is a unique resistance culture against the dominant narrative of the prison system.”

“This small, fun experience of art led me to here,” Murillo said.

“Any art form in itself, whatever creative way you can be, just hone in on it, just drive on it. It leads to certain paths and doors that open up for you,” Bran-Gudiel said.

“I think this is a very powerful movement! We are not bad people, we’ve just made bad choices. Art helped me heal by allowing me to escape reality for a couple hours a day, not to mention fill my locker by selling my artwork,” Raygoza wrote in a comment during the virtual event.

Despite being essential to incarcerated peoples’ lives, Rising expressed that art is unsupported by the carceral system.

“When you’re making this stuff, you have to secretly do it, because it’s contraband,” Rising said. “If you’re caught making these little pieces, they could call it out as contraband, and they could give you a rules violation.”

Martinez continually sent pieces to Rising, until he found the right day of the week, on which the guards did not intercept the art from the outgoing mail.

“[It’s] trial and error. To get a lot of this art out, it had to be snuck out,” Rising said. “To have this in front of us today is really special.”

When an attendee asked how the community can support the Underground Scholars’ work, the curators shared links to their Instagram and fundraising page, as well as a piece of advice.

“Abolition. We need to rebuild the foundation and then rebuild the house instead of just remodeling,” Rising said. “Wherever there is a police agency attached to schools, there is a pipeline to the prison industrial complex.”