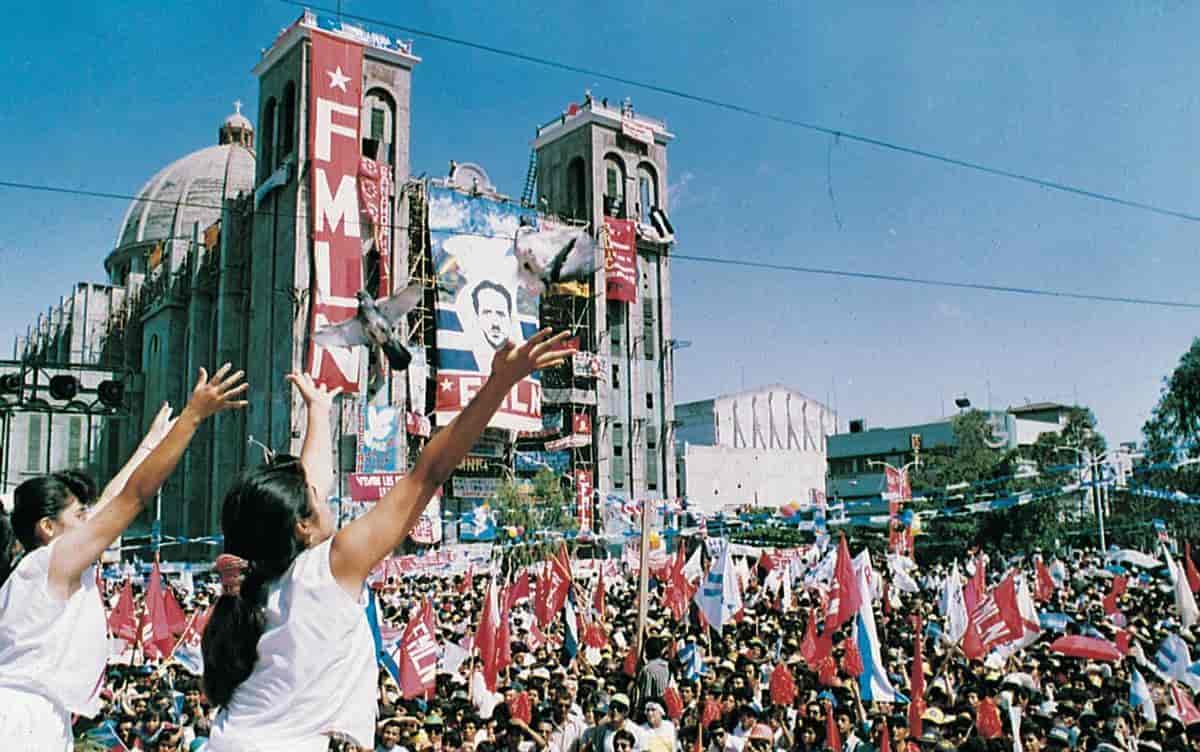 Today, Jan. 16, 2022, marks the 30th anniversary of the signing of the Chapultepec Peace Accords, and for a generation of Salvadorans and Salvadoran-Americans, these peace agreements were a momentous occasion. In essence, the accords brought an end to 12 years of fighting between the left-wing Farabundo Marti National Liberation Front and the military-led government of El Salvador during the Salvadoran Civil War, which lasted from 1979 to 1992 . Twelve years of fighting devastated the small Central American country and spurred mass migration to the United States and Canada. If you’re the descendent of those who fled El Salvador during or after the war, like myself, then you might have grown up under the shadow of war but unaware of the history. As a Salvadoran in the United States, I know all too well the cultural amnesia of war because for those who lived and survived it was easier to forget than to remember. Recently, I have dedicated my writing towards what journalist and writer Roberto Lovato calls “unforgetting.” As an act of unforgetting and to commemorate the anniversary of the signing of the Chapultepec Peace Accords, I have chosen to look at a few songs that were written about the Salvadoran Civil War. While this is not a history lesson, it is my hope that these song reflections will offer a sort of cultural history of the Salvadoran Civil War through music.

There’s a line in Peter, Paul and Mary’s “El Salvador” that has always stuck with me. Around the 45-second mark the lyrics, “But everyone is innocent until they arrive / in El Salvador” are sung. It’s a striking statement and one that echoes the sentiments expressed by the late Joan Didion in her 1983 book-length essay, “Salvador,” which at the time of its publication was a significant work and one of the earliest works of American literature to represent and tackle the Salvadoran Civil War. In the work Didion famously proclaimed, “terror is the given of the place.” As a Salvadoran in the United States, I grew up clinging to this mantra and for a time it was one of the only modes of representation I was aware of that remotely referenced El Salvador in the public imagination.  I could not know at the ripe age of 15 that these words would shape the portrayal of Salvadorans within the media. Time and time again I’m reminded of how seemingly earnest portrayals of Salvadorans do more harm than good, but the song takes an ardent stand in other aspects. Above all, it is an indictment of the United States intervention in Central America. Throughout the song the trio lambastes military funding of right-wing war efforts in El Salvador, “The junta is ‘assisted’ by Americans /  And if 60 million dollars seems too much to spend.” There is a condemnation of the controversial training of Salvadoran military personnel at the infamous School of the Americas, now the Western Hemisphere Institute for Security Cooperation, “They’ll continue training troops in the USA.” Furthermore, the song sheds light on the 1980 murders of U.S. missionaries in El Salvador, “And watch the nuns that got away.” Despite being mired in white savior tropes, it sheds light on the human rights violations perpetrated by the right-wing government aided by United States funding.

U2’s “Bullet the Blue Sky” could not be more sonically different from “El Salvador.” The story goes that lead singer Bono traveled to El Salvador and Nicaragua during the 1980s to witness the conflicts in El Salvador and Nicaragua. Reflecting on this trip he recounts that he “always wanted to go and see things for myself.” Upon returning, he recounted to U2 guitarist The Edge what he saw during his time there and instructed him to, “put El Salvador through an amplifier.” Released on their seminal 1987 album “The Joshua Tree,” the song opens with the thumping sounds of Larry Mullen Jr.’s drums. Shortly after, the drums are followed by Edge’s searing distorted guitar and Adam Clayton’s rumbling bassline. Thereafter, Bono comes into the mix proclaiming, “In the howlin’ wind / Comes a stingin’ rain / See it drivin’ nails / Into the souls on the tree of pain.” The lyrics are simultaneously ambiguous and profoundly visual. The first three lines evoke the image of the bullets used by the Salvadoran military and death squads to wreak havoc on innocent Salvadorans. Throughout the song, Bono will continue to conjure up apocalyptic images of El Salvador in times of war as he condemns the United States’ involvement in Central America and the Salvadoran Civil War: “Outside, it’s America” and “See the rain comin’ through the gapin’ wound / Pelting the women and children / Who run into the arms / Of America.” The latter lyrics highlight the mass migration spurred by violence of the war. The power of the song lies in the way it highlights the wholly human cost of war. Bono’s words are timeless and could even be applied to continued U.S. intervention in Central America recently seen in Honduras, Nicaragua and of course El Salvador.

I grew up listening to the stories of relatives and family friends who made the treacherous journey from El Salvador to the United States. In these stories I heard about the struggle of hiring a coyote who would help to get you across three borders into the United States, and of the life and death situations during the journey. The crossing of three borders to get from El Salvador to the United States gave way to the phrase “tres veces mojado” or translated into English “three-times wet.” The arduous plight of Salvadorans fleeing their homeland during the war is the subject of Los Tigres del Norte’s song “Tres Veces Mojado.” The first lyrics highlight this reality, “When I came from my land El Salvador / With the objective of arriving in the United States / I knew I would need more than just courage.” It’s a profoundly sympathetic narrative about the plight of Salvadorans struggling to find asylum in the United States amid the turmoil of the civil war and the colossal courage one needs to leave their homeland because no person wants to leave the only home they’ve ever known, but sometimes they have no choice.

Honorable mentions: These are songs that for the sake of length I did not include, but warrant a listen if you’re interested in the cultural impact of the Salvadoran Civil War. “El Salvador ta’ Venciendo” by Yolocamba I Ta, “Weapons for El Salvador” by The Ex and “Himno del Frente Farabundo Martí para la Liberación Nacional (FMLN).”