As Winter Quarter 2022 moves into its third week of majority online instruction, UC Santa Barbara international students are facing a bevy of travel restrictions that have swayed their decision on whether to stay in their home country or at UCSB. From mandatory quarantining for international travel to rising prices in booking flights, home has now become an unattainable destination for many international students. 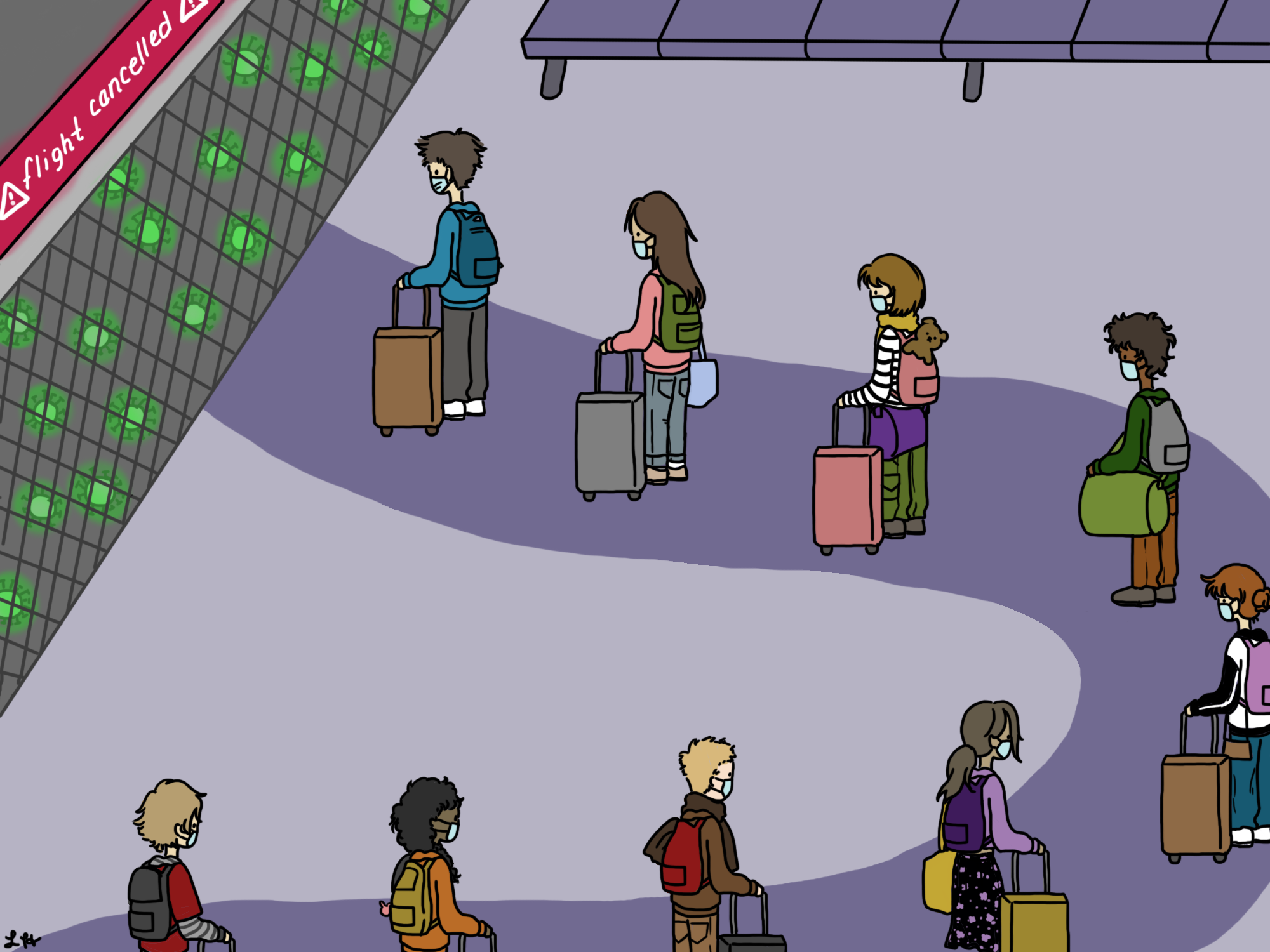 Second-year psychological and brain sciences major Phuong Nguyen holds an F-1 student visa and is from Vietnam. Nguyen lived at home for the entirety of her first year and, after coming to UCSB for her second year, has not been able to return home.

“If I were to go back to Vietnam for the break, I would have to quarantine and it would just take up a lot of time,” Nguyen said. “It’s a lot of money to travel internationally right now … if I just want to visit and spend my break, and it’s not really a good enough excuse. So unless it’s an emergency, I don’t think I’ll be able to go back home anytime soon.”

Nguyen said she contracted COVID-19 after visiting a family member in Texas who tested positive over winter break and is currently in isolation housing.

“It’s just a bedroom by myself, and they send me meals twice a day,” Nguyen said. “I don’t have any symptoms. So it’s a bit easier on me, and I don’t really suffer in that sense. I’ve been able to join my classes online and do my homework.”

“I’d love to be back home if remote instruction extends, but that’s probably not the case for me. So I’ll probably still be here even if it extends,” she continued.

Wei said that even though she understood the efficacy of the travel quarantine policy, it made travel difficult for many students like her.

“The quarantine policy in China is kind of strict but it is proven effective to curb the spread of COVID so it may be good,” Wei said. “But, it poses a lot of inconveniences.”

Wei said that other international students from China that she knew of also opted to stay in California, with some of them choosing to travel domestically over winter break.

“I only know of one student from China who went back,” Wei said. “Many of the Chinese students stayed in Goleta and a bunch of them [went] to other places, notably Los Angeles, also the East Coast, but mostly within California.”

Wei said that she wouldn’t have chosen to travel back to China, even in the absence of the pandemic, because she’s trying to obtain California permanent residency. However, she said she would have traveled outside of her residence in Goleta if it hadn’t been for the risk of catching COVID-19.

“It was very boring,” Wei said of her experience staying in Goleta over the entirety of break. “The most horrible thing is that I stayed in Goleta primarily to not be infected, and I got COVID anyway because of my roommate who went to a party.”

Second-year environmental studies major Yirui Qiu and first-year graduate student and electrical and computer engineering major Rey Yue also emphasized the extensive quarantining they would have had to undergo in order to fully enter their respective home provinces in China.

“[Winter break was] just two weeks, so it’s not worth going back … if I want to go back to China, we have to quarantine [in the United States and China] for at least 21 days,” Qiu said.

Qiu also noted the high price of travel and quarantine.

“You have to pay out of pocket for the hotel, and you have to stay there for the quarantining period,” Qiu said. “The price for a flight is also insane, like two grand, and they would cancel our flights randomly and frequently.”

Returning home to Shenzhen, China was also not an option for Yue.

“If I want to get into China, [I have to] pay for a hotel for 14 days, but then I also have to quarantine at home for seven days,” Yue said. “But that’s our entire winter break.”

Even if UCSB’s remote instruction period for this quarter extends past Jan. 18, Yue said that going back home to Shenzhen is not a feasible option.

“I unfortunately cannot go home [to China] because once classes are back in-person, there will be no option to do hybrid again.”

“All of my graduate research work is always done online anyway, but I do have classes so I have to be here. Otherwise, why am I paying rent?”

Yue explained that because they have already signed a full-year housing contract with university housing — and because they already plan on going back home after the end of spring quarter — it would not be practical to leave early.

“For me, it’s kind of different because I already plan on going back after spring quarter ends,” she said. “I also signed this contract with student housing, so there’s no reason to leave early.”

Looking into the future, Yue worries about the longevity of COVID-19 and its impact on her time at UCSB as an international student.

“I just think that it would be super cool if hybrid is always an option because I don’t think that COVID is going to end for another two years,” they said. “I feel like we’ll have a couple months where it’s chill, and then the virus will mutate … and it’s really hard to coordinate your [travel] schedule [between home and UCSB] because when it’s in person, you have to be here.”