The Daily Nexus
News
Redistricting Moves Isla Vista, UCSB Into the Second District From the Third
January 13, 2022 at 11:00 am by Atmika Iyer

Following the 2020 Census, the United States launched into redistricting within each of its counties. In Santa Barbara County, Isla Vista and UC Santa Barbara have been moved from the third district to the second district for the first time. 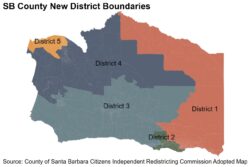 As a result of the shift, Isla Vista and the university now have a new representative on the Board of Supervisors: Gregg Hart. On Saturday, he will replace Isla Vista’s representative from the past five years, Joan Hartmann.

“I’m looking forward to serving as Isla Vista’s voice on the Santa Barbara County Board of Supervisors. This is a bit of a homecoming for me, as I actually began my career in public service as a member of the Isla Vista Community Council while attending UCSB,” Hart said in a statement to the Nexus. “I am eager to collaborate with local residents and community partners to improve the quality of life for all who call Isla Vista home. I’d also like to thank Supervisor Joan Hartmann and her staff for doing a great job representing Isla Vista over the past five years.”

Hart also announced on Jan. 13 that he will be running for the California State Assembly, and consequently, a new supervisor might represent the second district.

The second district is composed of part of Goleta, Eastern Goleta Valley, Isla Vista and part of the city of Santa Barbara.

The housing crisis at UCSB led many students to find housing throughout Goleta. As a result, some students may still be represented by the third district instead of the second.

Spencer Brandt, the board president of the Isla Vista Community Services District (IVCSD), stressed the importance of representation on the Board of Supervisors for Isla Vista. Since Isla Vista is an unincorporated part of the county, it is especially dependent on its supervisor for county-level representation.

“We’re very dependent on the Board of Supervisors for being the interface between our community and county government, which is where we get most of the municipal services in the community from,” Brandt said. “The Community Services District was created to supplement those services by both creating more localized resources for residents but also by growing our community’s power and being a voice for the things that we care about.”

UCSB spokesperson Shelly Leachman echoed Brandt, adding that the relationship between the university and the Board of Supervisors is essential.

“UC Santa Barbara is the region’s largest employer of local Goleta and Santa Barbara residents and a campus that contributes more than $1 billion to the regional economy in indirect and direct benefits, including retail, restaurants and hotels as well as learning, arts, lectures and school-based programs, making a strong partnership between the campus and local government essential for the region,” Leachman said.

Brandt believes Hart’s record on the Board of Supervisors shows a passion for issues that Isla Vistans also share.

“I think he understands a lot of the issues here. His record on the Board of Supervisors is one of being a strong advocate for fighting climate change and criminal justice reform. These are things that Isla Vista residents really care about, so I’m really excited about working with his office,” Brandt said.

Aside from the shift to a new supervisor, Isla Vista’s local elections will now occur on midterm years instead of election years, which raises concerns about civic engagement.

Brandt added that he’s “prepared to work very hard to make sure that we preserve a progressive majority on the boards.”

“If you look at the voting patterns, both in Goleta but also in other parts of the county like the city of Lompoc, you continue to see a trend towards becoming more diverse, more progressive. And I’m very hopeful that we can continue to have a progressive majority on the Board of Supervisors,” he continued.

Brandt thanked Isla Vista’s former representative Supervisor Joan Hartmann for her efforts in representing and advocating on behalf of the Isla Vista community. As the third district and I.V.’s representative, Hartmann played a role in the IVCSD’s growth over the past few years as it expanded its role as a governing body. Brandt said she was “instrumental” in efforts to open the Isla Vista Community Center and in advocating for I.V. at the county level.

Leachman added that the university is “look[ing] forward to working with Supervisor Gregg Hart on issues that affect the campus, our students and the greater Goleta and Santa Barbara communit[ies].”