The Daily Nexus
News
RCSGD Leads Walk Through Campus in Observance of World AIDS Day
January 10, 2022 at 11:20 am by Yiu-On Li

The Resource Center for Sexual and Gender Diversity at UC Santa Barbara led a walk on campus on Dec. 1, 2021 in honor of World AIDS Day. The event aimed to raise awareness of and stand in solidarity with people living with human immunodeficiency virus and acquired immunodeficiency syndrome. 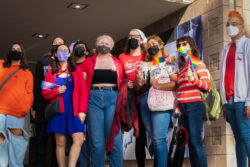 RCSGD encouraged participants to dress in red attire prior to the event and distributed red ribbons and pins to attendees. Mark Alfred / Daily Nexus

“The [acquired immunodeficiency syndrome] AIDS crisis wasn’t that long ago, and it was something that was never really publicized as much as it should be,” said first-year political science major and attendee Nat Alvarez. “So by bringing awareness to it, we’re helping to honor the lives that were lost and also raising awareness because it is still something that’s going on.”

Fourth-year biospsychology major Jordan Levine serves as the outreach coordinator at the Resource Center for Sexual and Gender Diversity (RCSGD) and helped organize the event.

“I really want people to understand that there are probably more people living with AIDS than they think,” Levine said.

Students and community members gathered outside the Student Resource Building (SRB) at noon. RCSGD encouraged participants to dress in red attire prior to the event and distributed red ribbons and pins to attendees.

The attendees marched past the Arts Building and Storke Tower and through the Arbor. Pausing for a minute or two under the North Hall skyway, they then walked the same path to return to the SRB.

“There hasn’t been much progress made on [human immunodeficiency virus (HIV) and AIDS]. There’s very little in the way of treating it,” said first-year pre-biology major and event attendee Izzy Cortez. “Once you have it, it’s basically a done deal.”

“[I’m here] just to show support for people who have it,” Cortez continued. “Show them that they aren’t alone and they’re supported, and it’s okay that they have it.”

Even without a cure, Levine said that the stigma around people with HIV and AIDS is unwarranted.

“There’s a saying that if you’re undetectable, you’re untransmittable,” he said. “The drugs and treatment right now for people with HIV and AIDS, when you start taking it, you can get the HIV load in your bloodstream so low that you can still have sex safely with people [and not] transmit it to another person.”

While the walk was the most outward-facing component of the event, the RCSGD also used Venmo and an Instagram bingo card to collect donations for AIDS Project Los Angeles, an organization that provides medical care, services and advocacy for people with HIV and AIDS.

One activity that didn’t make it into this event due to time constraints, according to Levine, was free HIV testing to all participants in collaboration with UCSB Health & Wellness. While he hoped that the service would be available by next quarter, he encouraged people not to wait if possible.

“In support for World AIDS Day, it’s always a good idea to go and get tested for HIV and AIDS,” he said.

Near the close of the event, Cortez described collective advocacy on behalf of people with HIV and AIDS as a positive feedback loop.