After losing two games on the road, the UC Santa Barbara men’s basketball team came back to the Thunderdome and was able to string together consecutive wins. The Gauchos’ victories against the Florida A&M Rattlers and Idaho State Bengals were led by senior forward Amadou Sow and freshman guard Ajay Mitchell, who both led the team with 13.5 points in the 2-game stretch. 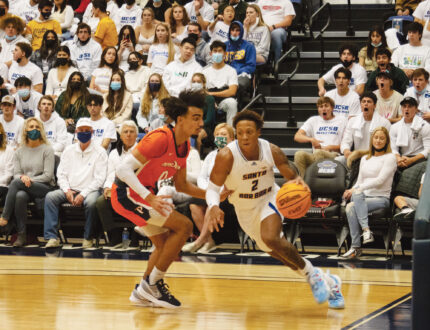 UCSB’s winning streak began with a 73-62 victory over Florida A&M. The Gauchos were able to jump out to a 7-point lead early in the first half. However, Florida A&M went on a run of their own to take a 15-13 lead. This was the last moment of sustained success for the Rattlers. The Gauchos were able to dominate the rest of the half to take a 41-23 lead.

The Rattlers were more competitive in the second half, but it was not enough to overcome their 18-point deficit. Florida A&M was able to cut the lead in the final minutes, but timely UCSB free throws put the game away. The Gauchos’ team-oriented style of play allowed for the team to have 4 double-digit scorers and 14 assists. Two Florida A&M players tied for the game-high in points with 16 each. Sow became the fourth Gaucho in program history to have 1300 points and 700 rebounds.

The Gauchos looked to start a winning streak in their matchup against Idaho State. Once again, UCSB started the game hot and took a 10-point lead. This cushion did not last long, as the Bengals went on an extended run and even took the lead late in the first half. A 3-pointer from senior forward Miles Norris gave UCSB a 27-26 lead at the half.

In the second half, the Gauchos were able to pull away. UCSB extended their lead to 7 points early in the half and never looked back. The Gauchos outscored Idaho State by 12 in the final half and secured a 56-43 victory. Sow led both teams in scoring with 18 points, while the Gauchos continued their success passing the ball by getting 15 assists.

UCSB will look to continue their winning streak on the road — a place where the Gauchos have struggled this season. The game will be the Gaucho’s Big West season opener as they take on the UC San Diego Tritons. After winning the Big West last year, UCSB will have a target on their back in every conference matchup.