UC Santa Barbara’s De La Guerra Dining Commons ended its longstanding tradition of offering a “late-night” service and menu starting this fall quarter, amid the university’s shift back to in-person instruction. In the past, students populated De La Guerra from 9 p.m. to 12:30 a.m. on Monday through Thursday for ice cream, corn dogs and other snack foods. 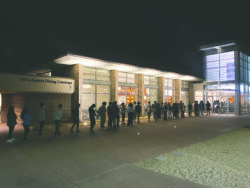 In place of the late-night dining option, the De La Guerra Dining Commons (DLG) now offers weekday breakfast from 7:15 a.m. to 10 a.m. and longer lunch and dinner times, extended by 30 minutes each.

All dining commons except Ortega Commons currently open at 7:15 a.m. and close at 8:30 p.m.

Collin Hill, a chef in the salad department at DLG, explained that there used to be two full-time cooks involved in the late-night shift who now help with the dinner shift instead.

“No more late-night has made it overall easier to deal with the workload,” Hill said.

Students who frequently attended late-night in the past, however, expressed their sadness to see the termination of the dining option, describing fond memories.

Third-year biology major Felix Mila reminisced on his freshman year memories at late-night. According to Mila, DLG offered a social aspect beyond just serving food and was the place to be at the end of the night after their “themed gatherings” every Tuesday and Thursday.

“Big groups of people would go after parties and get burgers, grilled cheese, fries, brownies and cereal. All the late-night munchies,” Mila said. “The kids that lived close to DLG in Santa Cruz, Santa Rosa, Anacapa and San Nicolas residence halls would use late-night all the time.”

“Sometimes, people have work to do, they’re busy and some people just like to eat dinner later. So having an earlier time sometimes isn’t convenient,” Ganesh said.

Singh also said he enjoyed the flexibility that late-night gave him.

“It allows you to be more flexible with your schedule … if it were open longer, that would help out in terms of my ability to study not late at night. Instead, I could just eat later. Not just study late,” Singh said.

Still, students who never had the opportunity to try late-night, such as third-year political science major Tony Zepeda, wish for the option to eat later after studying remained available.

“I just think in general, the dining commons should be open later. We’re all college students, and we’re all studying late at night. They close way too early, so I think that needs to be changed, honestly,” Zepeda said.