The Isla Vista Recreation and Park District discussed the renovation of Pardall Gardens during a community engagement event titled “Pardall Gardens Renovation Project” on Nov. 10, inviting community members to vote on new design ideas for the park. The meeting was held over Zoom, and voting boards were also set up at Pardall Gardens throughout the following weekend. 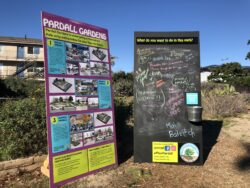 The meeting was held over Zoom, and voting boards were also set up at Pardall Gardens throughout the following weekend. Melea Maglalang / Daily Nexus

The Pardall Gardens Renovation Project is funded by grants from the state’s Recreational Infrastructure Revenue Enhancement (RIRE) Program and the Per Capita Program, providing up to $420,000 for conducting park renovations and improvements.

IVRPD partnered with Pacific Coast Land Design to present three potential ideas and to establish a new identity for the park.

“What we’ve done tonight is provide big ideas,” said Eric Berg, principal at Pacific Coast Land Design. “They’re really meant to provide three theming ideas that address the need to establish identity at the park — one of the key things that has been highlighted and established, that it’s missing.”

The first idea aims to enhance the social aspects of the park, taking advantage of its location in downtown Isla Vista to create a place for people to meet with friends or hold events. The revamped “Social Pardall” would resemble a plaza with a large central shading area and seating spaces around the park, according to Breanne Alton, landscape designer from Pacific Coast Land Design.

“Maybe you’re catching up with friends after class or grabbing lunch and heading to the park,” Alton said. “It’s meant to be a space that you can go alone or with a group or where even large events like pop up events like an art fair or a marketplace could be held.”

The second idea, “Peaceful Pardall,” capitalizes on the park being one of the more “quiet, nature-filled spaces” in I.V. The design includes accessible pathways to a series of platforms that could be used for everyday activities, from hanging out with friends, doing yoga or hosting music performances. It would also feature light poles to illuminate the space, increasing safety and comfortability in the area at night.

“We were really excited about how quiet and how peaceful it really was, with really great views in and out,” Alton said. “It really does have a meditative-like quality to it, just creating these quiet spaces for reflection and conversation.”

The third idea reimagines the park with a fun and recreational atmosphere, including amenities such as cornhole, a swing and a u-fix-it bike station. “Playful Pardall” depicts a colorful meeting spot meant to spark energy in adults and college kids, according to Alton.

“Wouldn’t it be cool if there was a place that is clearly for adults, but it’s welcoming you to engage with these playful elements that are typically for children,” Alton said. “We use bright colors and create things that are for recreation and that sparks play and joy in adults in our free time that we get after lunch or between classes or after school or work.”

These designs are also not mutually exclusive, Berg added. Elements between each idea may be incorporated into another, like incorporating the swing from the playful design into the peaceful design.

Community members voted for their preferred design at the on-site voting boards set up at Pardall Gardens from Nov. 11-16. The boards showcased digital mock-ups of the proposed designs and a link to the voting poll. People could also write comments on the provided chalkboard.

“There are pieces of all of [the designs] that are good, but what we’re trying to do is establish an identity here and really wanted to set a couple things that worked well together,” Berg said.

I went along for the “IVRPD Parks Bike Tour” on Saturday & it was fun. Lots of great ideas from the IVRPD directors & staff, but the tour didn’t just cover Pardall Gardens.
They also covered Greek Park & the Sueño Bark Park (doggie park). It was truly great to see IVRPD returning back to being a parks & recreation management organization & the plans being considered are great.
The folks from PLD, they’re great & very engaging, they’re also involved w/ the remodeling of Children’s Park on Picasso as well. Good things coming!

lighting please. This is a camp ground for creepies