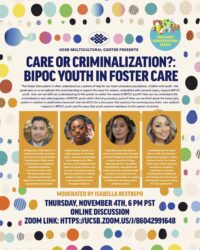 The event was moderated by Isabella Restrepo, a Ph.D. candidate in the feminist studies department at UCSB and the recent interim program coordinator for the Multicultural Center (MCC), who hosted four panelists who discussed their relationship with the foster system as social workers, former foster youth or both.

“When I was in foster care, it was mandated in Los Angeles County for all foster youth to participate in independent living programs where they taught me how to bank, about student loans, grants and how to apply for scholarships … there were so many resources, at least in Los Angeles, that I do not see here in Santa Barbara County,” Guajardo said.

Guajardo said that offering these resources can provide youth with the skills needed for independence and help them achieve success later in life, emphasizing the need for Santa Barbara to make such opportunities available to local foster youth.

The absence of education on sex trafficking and harassment is another major challenge that BIPOC foster youth face, according to Eclasia “Clay” Wesley, a former foster youth who currently teaches high schoolers in Los Angeles about civic engagement.

She elaborated on the lack of education on sex trafficking within schools.

“A lot of our young students are experiencing going to school and being harassed and the prevention or the education around sexual violence is not being taught in schools,” Wesley said.

Wesley also expressed the need for exposing young women to the concept of having full authority over their bodies and embracing self-confidence, in order to change their outlook on their individual value.

Kayla Martensen, a faculty member at Loyola University Chicago and a doctoral candidate at the University of Illinois, Chicago, discussed her observations of Chicago’s foster youth and reform efforts for young people in the criminal justice system. Though intended to assist them, the methods utilized lengthened each case’s turnaround period for releasement from the prison system, making it more difficult for young people to be disentangled from the legal system, according to Martensen.

“Their efforts at reform are really just creating a perpetual and more intense level of surveillance for parents who become court-involved,” Martensen said.

She described the process that criminalized youth must undergo in the court system: When accused, children are assigned to complete remedial programs that, when completed, free the child of charges. However, this process must be restarted if the child’s behavior relapses or if they do not fulfill the program requirements. In comparison, those given direct punishment rather than program fulfillment have a deadline that defines their time in the legal system.

The attempt at improvement ensnares youth into the legal system and prevents them from losing their criminal records, according to Martensen.

“If someone took a punishment route, and there was an attachment of your two years of probation, or even incarceration, there’s an end to that time, where through these courts, mental health courts or through drug courts, there’s no end,” Martensen said.

Levette Morales, a former foster youth based in Santa Barbara who works with Casa Pacifica Centers for Children & Families’ wraparound program as a Parent Partner helping foster parents and biological parents keep their children in their homes, said that many parents and supporters of foster youth are ill-equipped to handle youth trauma.

This can translate into parents misunderstanding certain behaviors and foster youth being kicked out of their homes, Morales said.

“I see a lot of times these kids, they’re being kicked out because they’ve got problems and they’re not being understood that they have a lot of trauma,” Morales said.

Restrepo then asked the panelists to discuss the incorporation of abolitionist strategies and ideologies in their work within the foster care system.

Guajardo affirmed that the structure of care in place today was built from oppressive ideals.

“When we think about the abolition of prisons and police, one of the central ideas is that prison and policing as a system is inherently racist, classist and heteronormative,” Guajardo said.

He noted that since its inception, these derogatory constructs have never subsided, but have rather fed into how the system is managed today.

“The argument is that it can’t be abolished because this is something that is embedded within all of our messed up, power structured systems that we have. So I think we have to destroy it,” Guajardo said.

Martensen elaborated on this idea, saying that the parameters of the foster care system were initially intended for the control of certain groups.

“The reason that the institution was established for different racial and ethnic groups are different and they’re rooted in and built on systems of racialized capitalism and white supremacy,” Martensen said. “I think we have to recognize how some of these systems like social work, family regulation, how they are just replicating control, surveillance and punishment of the carceral state.”

Martensen stated that examining the institution of foster care through the abolitionist lens is essential to caring for BIPOC foster children and reworking the system.

Restrepo’s final question asked the panelists about acts of resistance that they see from BIPOC youth, who believe their actions will give them control and autonomy over their own lives.

Morales shared an experience where, as a foster child, she stole a car and left her home, noting that the experience was an example of how youth can be criminalized while attempting to acquire independence and autonomy.

“Although I stole a car and that was not right, I did not understand what I was doing at that time either. That was just my way of taking control of that situation, of not wanting to be in that home,” Morales said.

In the final minutes of the seminar, Restrepo opened the floor to a Q&A session with the audience.

Both Wesley and Guajardo enforced the concept of resiliency in those who work with foster youth.

“If I could think in terms of right now, I would say making sure that we are employing people who really want to be invested in these different surrounding wraparound services,” Wesley said.

Guajardo encouraged those who work with foster youth to offer support and sensitivity.

“If you can provide a relational reimbursement where you are showing up for this kid, — whether you are a mentor, if you are a teacher, if you are a doctor — have compassion, have empathy, have patience,” Guajardo said.

Wesley ended the event by encouraging the audience to continue engaging in discussions surrounding BIPOC youth in foster care.