The Daily Nexus
Reviews
Oliver’s of Montecito
November 9, 2021 at 1:52 pm by Jill Ridens

This week’s review is for all the college students who are too broke to eat at a nice restaurant. Yes, we are talking about me. My mom came up to visit me in Santa Barbara and said she would take me anywhere I wanted for dinner. Conveniently, I had always wanted to try a boujee, upscale, celebrity-spotting restaurant just down the 101. Oliver’s of Montecito is an all-vegan, California-casual dinner restaurant. This place was everything I wanted and more; I cannot emphasize enough that it is a must-try.

Let me set the stage.

Located in the heart of Montecito, Oliver’s is a beautiful indoor-outdoor restaurant with beautiful trees, string lights and an amazing setting for photos. I would recommend a reservation, as it was busy even on a Thursday night. The menu had a lot of shared plates, so I would suggest sharing dishes with your group to try a little bit of everything. It’s a lovely, intimate setting, but they also have a small bar with a TV indoors.

Let’s get to the good stuff. 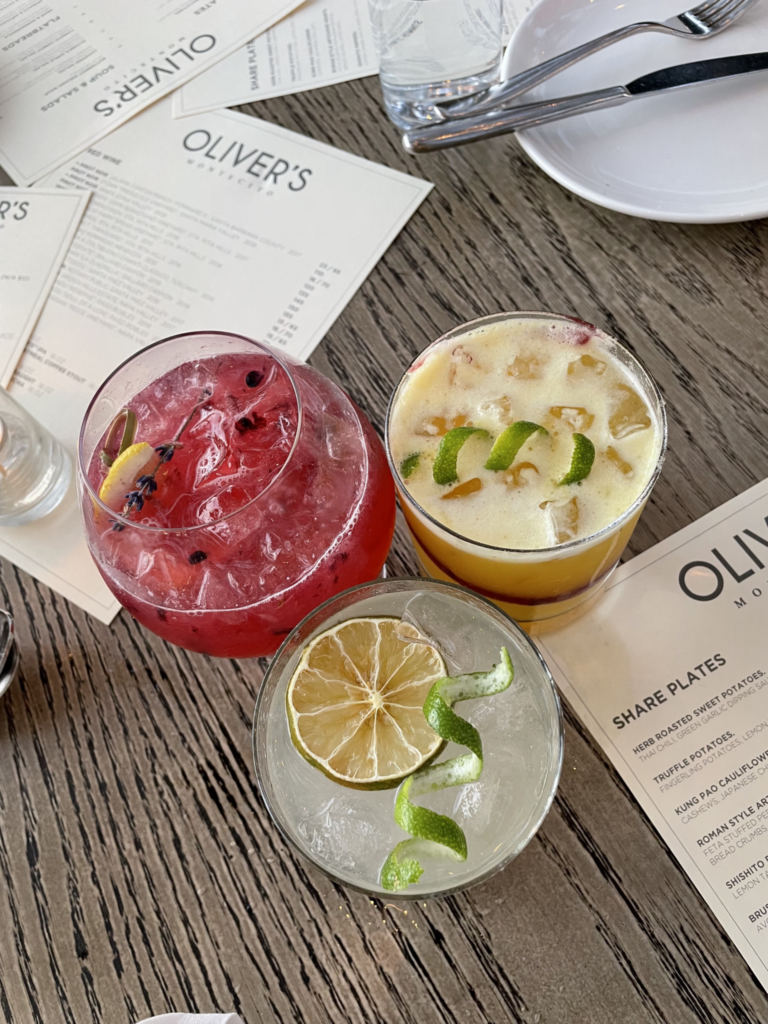 To start, my group ordered the “Endless Summer” cocktail, the “Mr. Pink” cocktail and a Moscow Mule. All of these drinks were the perfect end to summer — refreshing, fruity and light. They were also $17, so this is why Oliver’s is for a special occasion. For appetizers, our server suggested the Roman Style Artichoke Hearts and the Kung Pao Cauliflower. Both starters were a 10/10. My personal favorite was Roman Style Artichoke Hearts which consisted of feta-stuffed Peppadew peppers, bread crumbs and lemon aioli. The starters were perfect for a party of four.

Now to the main event.

Because we had some starters to share, we all ordered salads as our main course. I enjoyed the Oliver’s Apple Salad, which consisted of Fuji apples, apple chips, candied pecans, smoked almond goat cheese, red onion and avocado, topped off with a champagne vinaigrette. The salad was a smaller portion, perfect to eat with the many appetizers we had. This was one of the best vegan cheeses I’ve tried — it was so creamy and smooth, making for another 10/10.

Now for the grand finale.

For dessert, we tried the apple pie crumble and the key lime crumble. Both were absolutely delicious, but my favorite was the apple pie crumble. I’m usually not a huge fan of vegan desserts, but this was to die for. The crust was made out of oats and stuffed with hot apples and topped with a vanilla sorbet. I can now say I’ve lived.

Overall, I would highly recommend Oliver’s to anyone. It’s definitely a nice restaurant that can be saved for special occasions when you’re ready to spend some money. For those who aren’t vegan like myself, it’s still worth the hype. I’m already planning another trip back here soon.

went to olivers tonight- waitress was rude- disrespectful and i told her so-her exact words when she asked me what was i drinking– i said no i dont drink- her response0- i,am not talking to u- albeit it was a community table- no class- no grace- could not care less- jeremy is a total jerk at receotion mgr presumably- he asked me to leave as i asked the waitress – when can i order something as it had been a long time -i told the waitress we are family etc- big ego- created a scene- so service sucks- i wont… Read more »