The Daily Nexus
UCSB
On-Campus Bike Thefts Increase From Previous Years
November 7, 2021 at 11:00 am by Stella Jia and Alex Rudolph

UC Santa Barbara returned with its annual increase of on-campus bike thefts this fall quarter with the most bike thefts in the last three years. 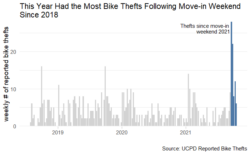 UC Police Department (UCPD) Lieutenant Dan Wilson said one possible reason for the increase of bike thefts is an increase in crimes of opportunity due to two new classes of students entering campus in person for the first time this quarter.

Given the popularity of biking on campus, Wilson said that individuals affiliated and unaffiliated with UCSB may be involved in these thefts, including people who reside outside of Santa Barbara County.

Isla Vista Foot Patrol (IVFP) Community Resource Deputy Sheriff Justin Schroeder said that there are two periods of the year with the most bike thefts: move-in and move-out.

“One period is now, with the start of the school year which is attributed to a lot of new students unfamiliar with the area and not properly locking bikes. Then the other period is towards the end of the year when move-out is going on,” Schroeder said.

While the move-in period results in bike thefts increasing due to more crimes of opportunity from students not properly locking bikes, bike thefts in the move-out period are more organized.

“The move-out period usually deals with more organized type crimes where they’re cutting the locks. Each year we catch people with pickup trucks full of bicycles. They pose as property managers saying they’re just clearing out the bike racks because all the students have moved out, but they haven’t yet,” Schroeder said.

“The most common of the repairs is a wheel replacement, which means replacing the wheel, rim strip, tire and tube. This repair can be anywhere from $70 to $150. This happens frequently when someone steals the front or rear wheel of a bike and leaves only the frame,” Pineda said.

Wilson stated that the Community Service Organization’s (CSO) bike registration program is the best way for students to get their stolen bike returned.

The CSO’s bike registration program gives serial numbers to bikes allowing them to be tracked. Thus, with each bike having its own serial number, UCPD can easily return stolen bikes to their owners.

The CSO also has a Summer Storage program where students can sign up to store their bikes in a secure location to prevent it from being stolen.

Wilson also said that UCPD is working with stakeholders to create more prevention methods aimed toward bike theft reduction. One method involves looking at the environment and opportunities that cause people to steal, which may include dim lighting and hidden bike rack locations.

According to Wilson, the Santa Catalina Residence Hall is an example of their prevention work in action. Santa Catalina has bike racks located in front of Portola, which is both a well-lit area and easily open to the public eye, thus preventing crimes of opportunity.