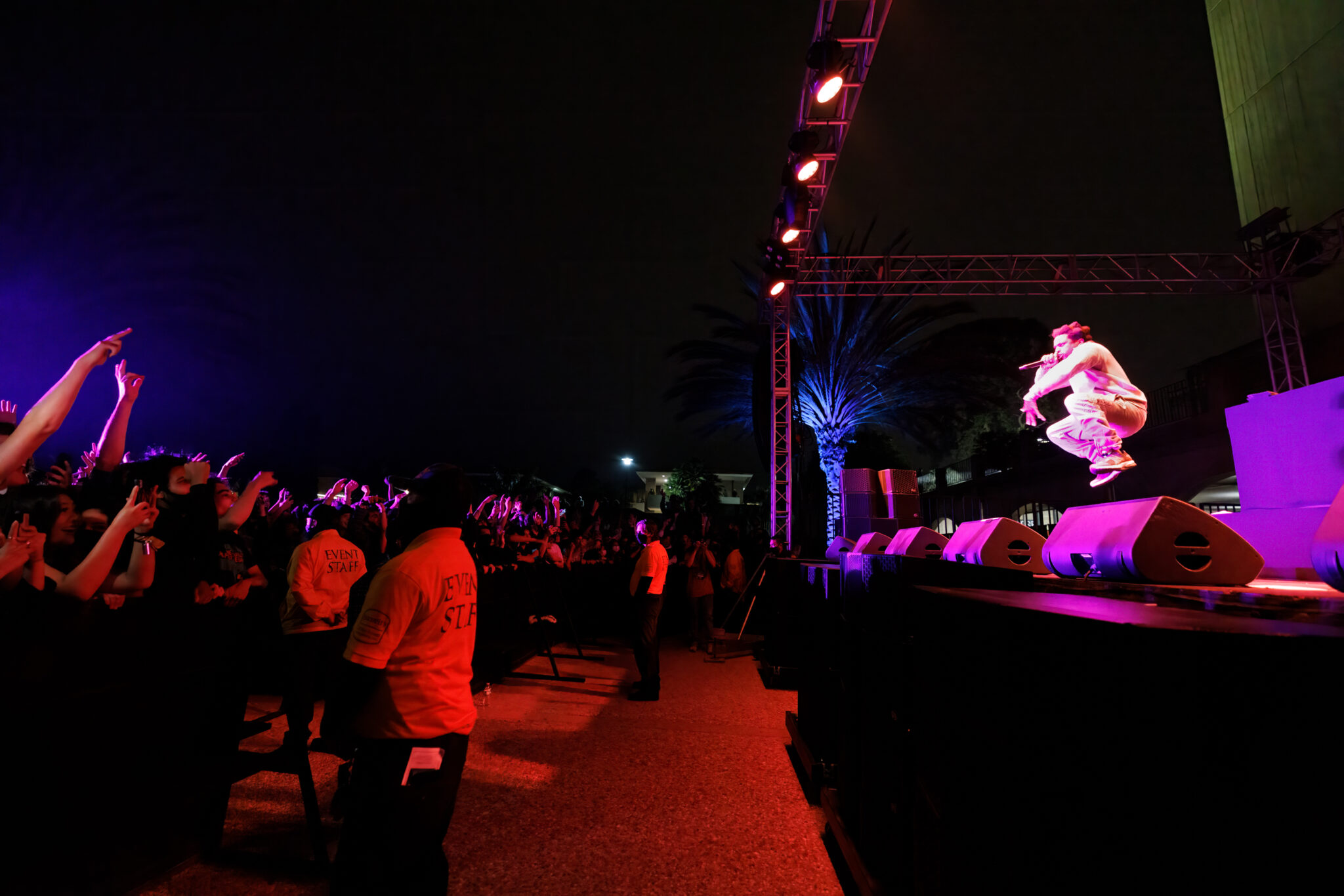 Over 2,000 students mobbed Storke Plaza this past Saturday, Oct. 30, to see rising hip-hop star Doechii and Florida rapper Denzel Curry hit the stage at this year’s Delirium. The usually placid and quiet square was transformed into a raucous and exhilarating mosh pit as the Associated Students Program Board’s (ASPB) annual Gauchos-only concert, which takes place every year over Halloween weekend, saw the crowd — many of them decked out in costumes — go absolutely crazy throughout the night.

For many students, this year’s show was their first in-person concert since before the pandemic, and a lot of people were excited to be able to see their favorite artists with fellow concertgoers once again. First-year writing and literature major Anissa Estrada said, “It’s my first Delirium, and it’s nice to hear live music,” and her friend Rachel Lin, a first-year mechanical engineering major, echoed her sentiments, adding that she didn’t “know either of these artists that well but hearing the vibrations from the music feels pretty nice.”

While some attendees were there to experience a fun night out with friends, it was clear from the swelling queue of people that snaked around Storke Tower that most students were incredibly eager to see the performers. After passing through security, fans rushed down the steps to get as close to the stage as possible, which was barricaded and closely monitored by event security. Nonetheless, a mild sense of suffocation and the occasional inability to move one’s limbs was inescapable as the standing area grew more and more packed. 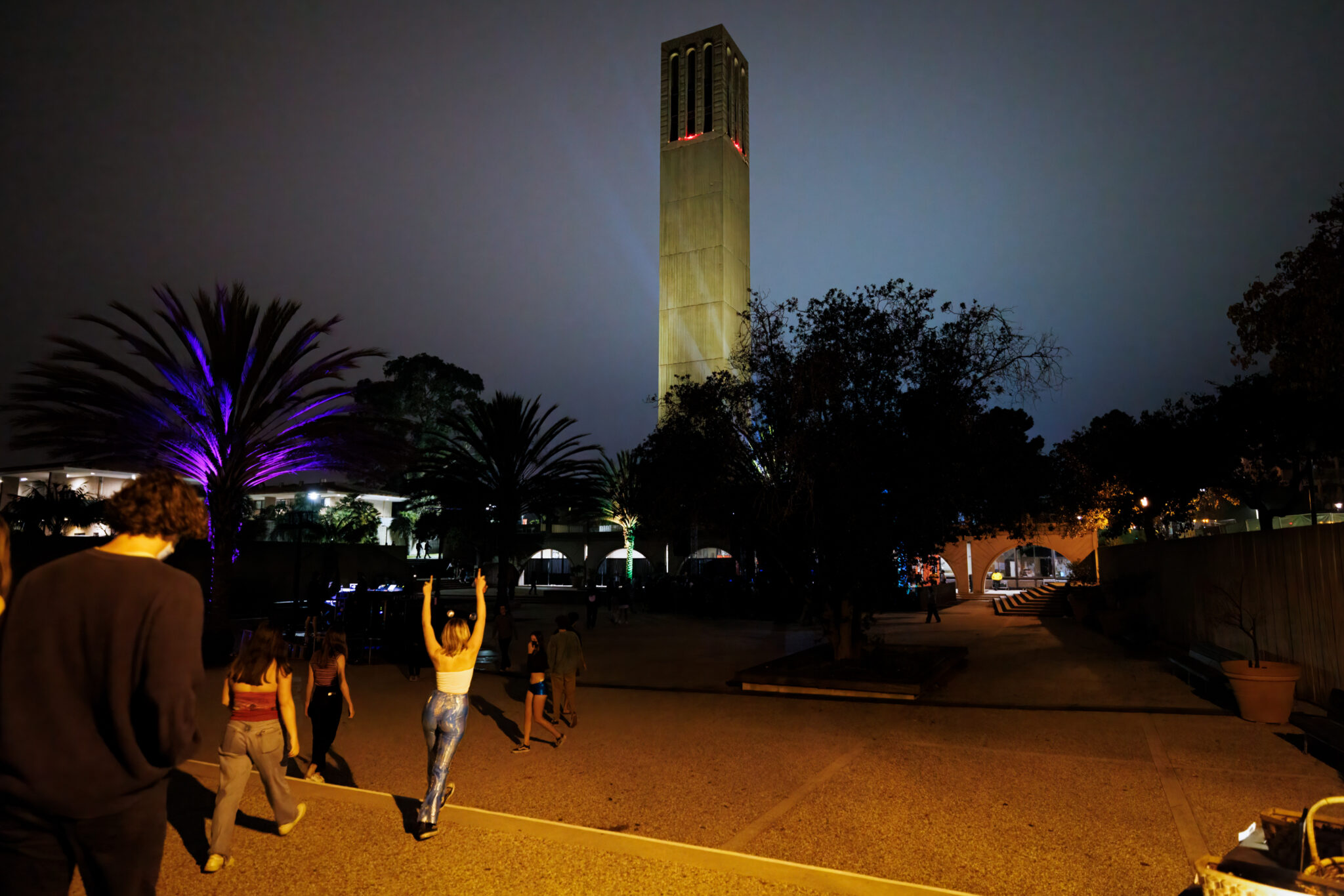 Before the show started, Jeffrey Cao, a first-year computer science major, said that he was excited about his first Delirium because “the tickets were five dollars and I really like Denzel Curry.” He also thanked the ASPB for “all of the work that they put into making this event happen for us.”

Tampa-based rapper Doechii, also known as Iamdoechii, opened the concert a little before 9:15 p.m., and her dazzling entrance on stage was met with heavy applause and cheers of excitement. Flaunting her impeccably trendy style in a green latex bodysuit and hot pink splattered-print denims, she kicked off her set with a riveting performance of “Girls,” a sexy pop-rap club anthem from her 2021 EP, “Bra-Less.” Always dancing and moving her hips to the beat, the “Black Girl Memoir” songstress showed her love for everyone who showed out, crowning UCSB as “the hardest motherfucking school in Cali.” 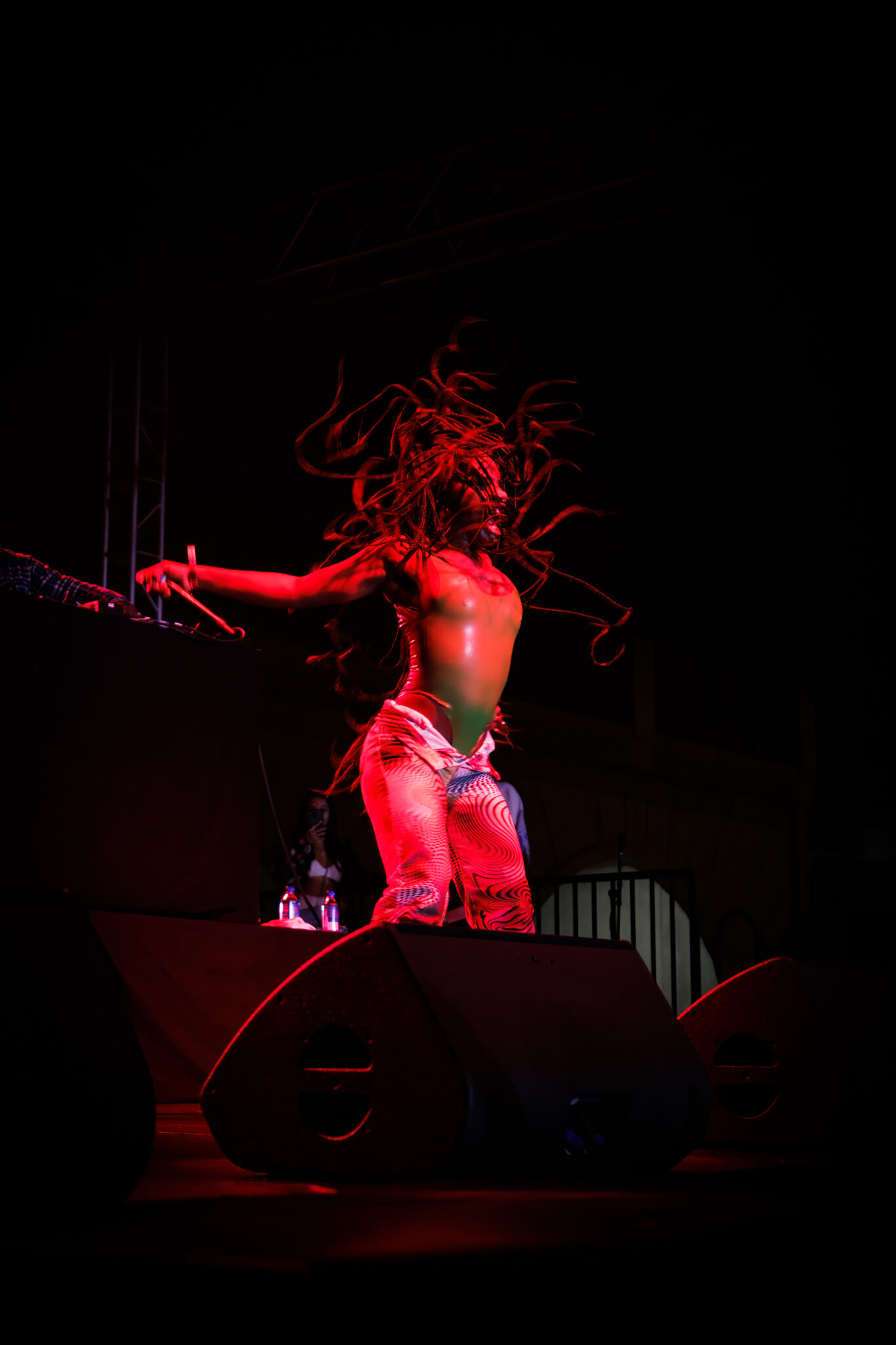 Admitting to the audience that the tequila was starting to run through her veins, Doechii said that she next wanted to play a song that she debuted while currently on tour with Top Dawg Entertainment rapper Isaiah Rashad. “I know what you’re thinking, I know what song you’re thinking, but it’s not that song, yet,” she went on before her DJ Kal Banx dropped the beat for her unreleased track “Crazy.” The rapper then performed “Wat U Sed,” a record on Rashad’s album “The House Is Burning,” on which she is featured.

Of course, the up-and-coming star had to sing her hit single “Spookie Coochie” to celebrate Halloweekend, and fans were electrified as they screamed the lyrics in sync: “Like a Chucky bride from the afterlife / Nothin’ nice, this the antichrist / This a bloody night / Bloody right.” 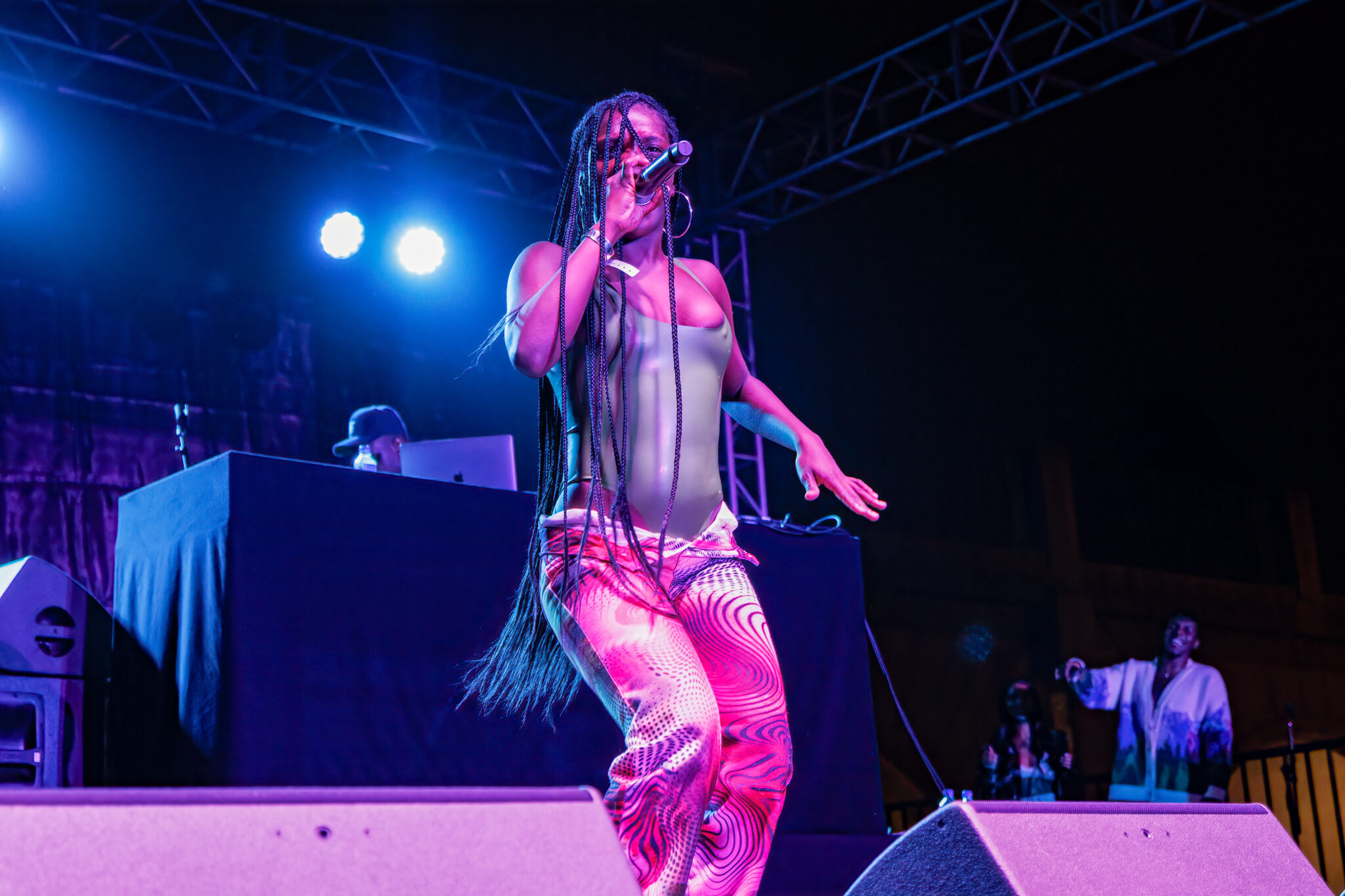 Doechii expressed her appreciation for Santa Barbara and thanked the crowd for their warm welcome, adding that she “wasn’t expecting this tonight” before signing off with “Yucky Blucky Fruitcake,” an eclectic and genre-warping track that went viral on TikTok for its opening lines, “Doechii, why don’t you introduce yourself to the class?”

The concertgoers, already amped up from the opening set, didn’t have to wait long for this year’s headlining act, as 2016 XXL Freshmen Class inductee Denzel Curry bounced out on stage promptly at 10 p.m. and immediately set the crowd on fire. Although the weather outside was frigid (by California standards, at least), sweaty palms and elbows were flying everywhere as people fervently crammed forward and stuck their U’s up in the air.

After opening with “Track 01” from “UNLOCKED,” his 2020 collaboration album with Kenny Beats, Curry wasted no time in giving a sincere shoutout to Doechii, telling the audience that they just witnessed a future star in the making.

The rapper then requested the crowd’s assistance with “DIET_,” noting that “this is one of my favorite joints — in the spirit of that, we’re gonna do this one for DMX, y’all feel me?” honoring the visionary hip-hop artist who passed away earlier this year. The audience chanted the words in acknowledgment, with quite a few devoted fans appearing to have every single verse down as they passionately screamed the lyrics up at Curry.

He paused in the middle of his set to ask people what they wanted to hear, and although much of the endless screams of requests was indecipherable, the crowd was clearly in favor of “SUMO | ZUMO,” a gritty and intense track included on his 2018 project “TA13OO.”

Curry’s voice was practically drowned out as the animated crowd belted out, “Pockets too big, they sumo / Tell me who the hottest motherfucker that you know / If it ain’t me, you a puto,” jostling one another to the point where overwhelmed attendees had to be lifted out by security guards. 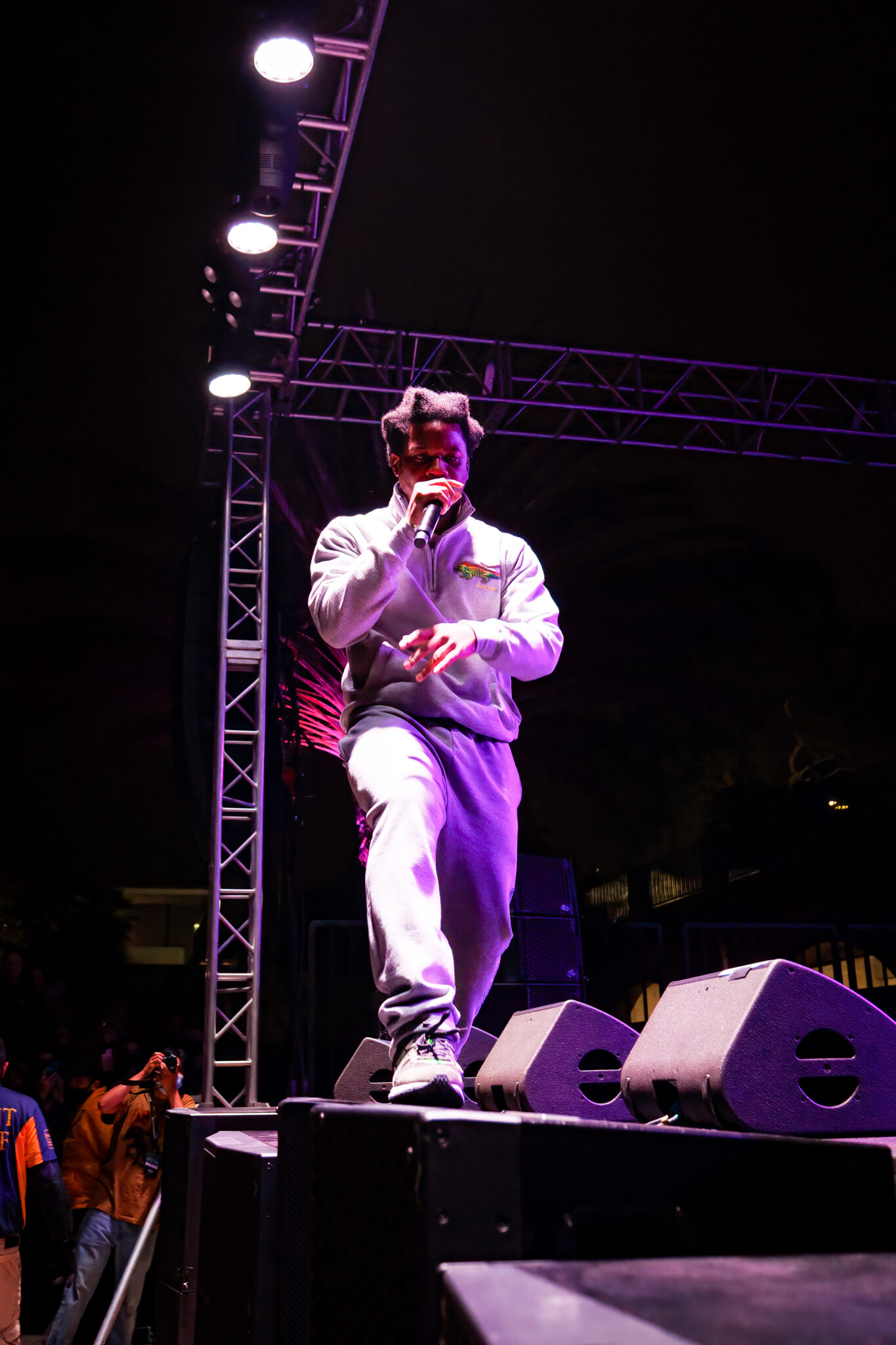 Regardless, the wild energy inside Storke Plaza didn’t let up for even a moment (some guy was even perched up in a tree), and as the pungent scent of marijuana smoke diffused through the air, the “RICKY” rapper bounded around the stage and leaned into the enthusiasm of the mob as he frequently interacted and joked with attendees. Nothing matched the absolute chaos, however, of the moment that the masses heard the opening notes of “Ultimate,” without a doubt Curry’s most recognized release to date because of the song’s viral fame on Vine in early 2016. My heartfelt condolences to anyone there who hadn’t been in a mosh pit before because the sheer madness that ensued as hundreds of people roared, “I am the one, don’t weigh a ton / Don’t need a gun to get respect up on the street,” should have come with a release waiver.

The amount of energy and passion that Curry brought to his performance was nothing short of impressive. Everyone at the concert was having fun because they could tell that he sincerely appreciated the crowd and was enjoying his time at UCSB, even turning around to ask his team why they hadn’t visited Santa Barbara in such a long time.

Fans were in no rush to go home and, as the night was coming to a close, chanted “Denzel! Denzel!” as the rapper shook his head in grateful humility. “It’s not me, it’s your motherfucking selves,” he said, adding that without the fans that listen to his music, he “wouldn’t have a career or a purpose.” 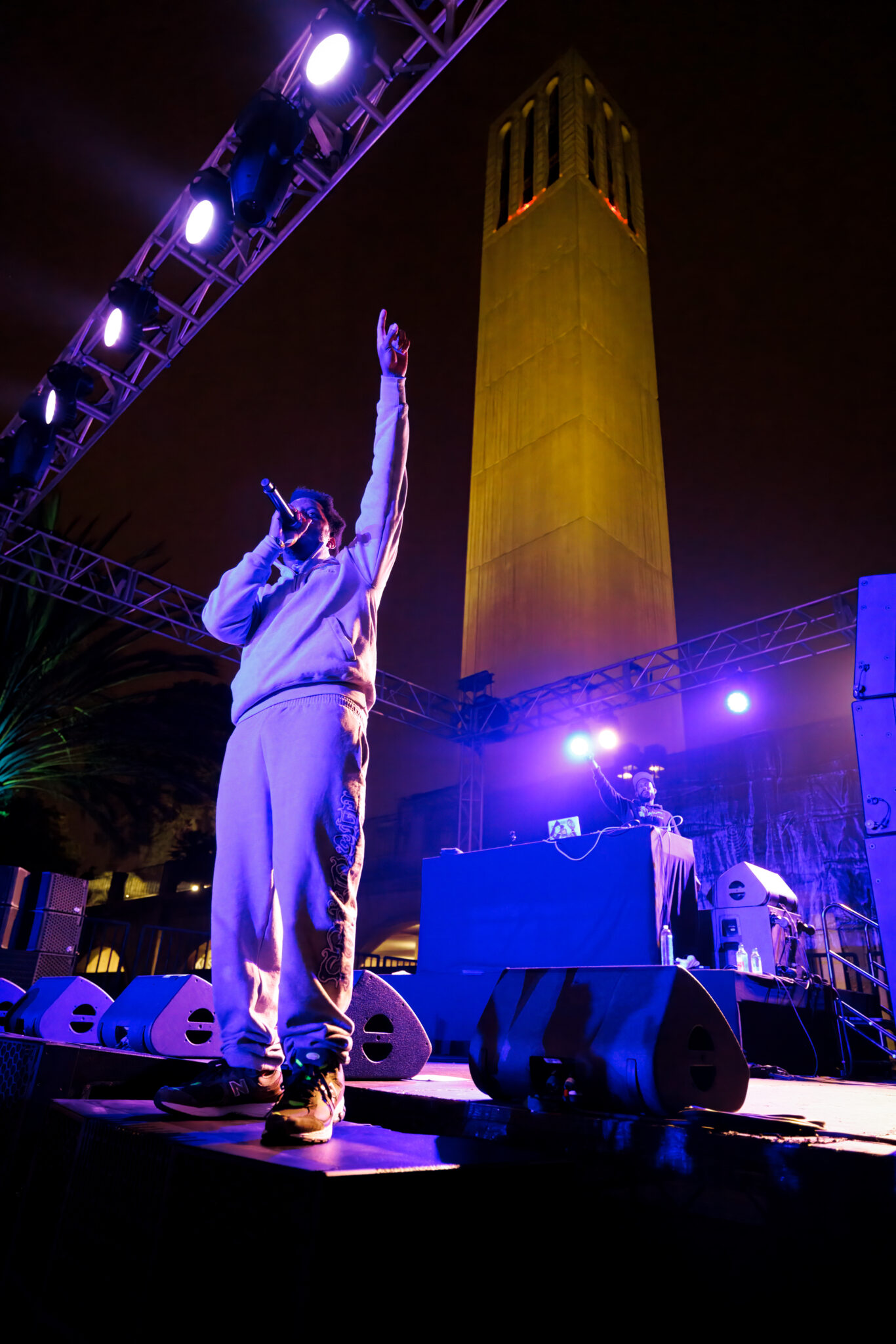 Closing out this year’s Delirium with an intoxicating performance of “CLOUT COBAIN | CLOUT CO13A1N,” Curry thrilled fans by coming down from the stage and running into the crowd, shaking hands and even hugging a few lucky audience members. The “This Life” rapper also obliged some fans with pictures before returning backstage as the cheers of the still-buzzing audience floated behind him.

As students exited Storke Plaza, lively conversations among friends filled the air as they reflected on the night. Neil Aggerwhil, a third-year communications major, said that he got to meet Curry before the show because he is acquainted with Doechii’s manager. He was at the show with his roommate, fourth-year psychology and data science double major Braeden Bailey, who is a big fan of Curry’s music.

“I’ve tried to see him before, but [the show] got canceled twice,” Bailey said.

Calvin Jenkins, a fourth-year computer engineering major, also had a good time attending the concert with some friends from his fraternity. “The show seemed to be really well-organized and safe, and Denzel Curry was a great performer. You could really feel the energy he brought to the stage.”

Once again, the ASPB delivered its promise of a fun and entertaining Halloween concert that students could enjoy with their friends. Doechii and Denzel Curry both showcased their remarkable talent and versatility as musicians and the ebullient crowd that descended upon Storke Plaza demonstrated, as always, that UCSB does it better. If last Saturday’s concert is any indication of the things in store from the ASPB, Gauchos can count on an exciting lineup of events throughout the coming school year.

EDM would be soo nice! One of these days?