Associate Professor of Global Afro-Diaspora Studies at Michigan State University Yomaira Figueroa-Vásquez discussed how Black diasporic communities throughout the Atlantic are impacted by histories of oppression during her lecture, “Intimacies to Apocalypso: Decolonial Feminism & Archipelagic Relationalities” — an event hosted by the UC Santa Barbara MultiCultural Center on Oct. 28. 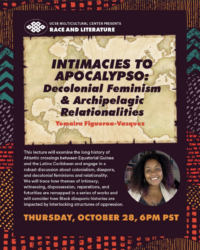 Figueroa-Vásquez is a Puerto Rican native and was raised in Hoboken, New Jersey. As a first-generation high school and college student, she spent her college undergraduate years at Rutgers University.

During her graduate years at the University of California, Berkeley, Figueroa-Vásquez said she faced situations where she was confronted about her identity as a Black Puerto-Rican native.

“After class, one of my classmates [called] me outside. He said, ‘That Puerto-Rican shit, you’re in California now, so you’re just Black here,’” she said when describing an interaction after a classroom introduction. “And so I was like, ‘Oh, this is really interesting.’ Now I’ve moved across the coast and I’m being interpreted in a very different way.”

This experience, Figueroa-Vásquez said, helped her perceive the way people track their cultural differences across geographic spaces, which inspired her work in comparative literature and culture.

Figueroa-Vásquez’s novel, “Decolonizing Diasporas: Radical Mappings of Afro-Atlantic Literature,” examines how dictatorships affect the intimate lives of people and the impacts of being a witness to oppressive violence. She also looks through forms of dispossessed cultures in the form of language, customs and spiritualities, as well as how communities may seek reparations and envision the future for themselves.

She explores these concepts through analyzing the works of diasporic artists and writers like Nelly Rosario, Michelle Cliff and Ernesto Quiñonez and how they offer new perspectives on dismantling preexisting beliefs about modern colonialism when read in relation to one another.

Throughout her study, Figueroa-Vásquez maps similarities within the forms of oppression between Spanish-speaking Afro-Atlantic communities, like Equatorial Guinea, Puerto Rico, Cuba and the Dominican Republic. She noted that diasporic forms of art provide a foundation for building a resistance through creating coalitions.

“Once you begin to see the linkages between your struggles, there’s no undoing the possibilities for liberation and the possibilities for coalition building that you can have,” Figueroa-Vásquez said. In creating coalitions, she emphasized the importance in finding companionship not only with individuals within one’s own community but also with others who have gone through similar experiences.

She starts her book with a chapter on intimacy, tracking how dictatorships and occupations in Equatorial Guinea can dictate the intimate lives of individuals and focusing on how Black women defied conformity within these regions by exploring sexual autonomy, especially those in LGBTQ communities.

These women, according to Figueroa-Vásquez, found a source of freedom through sexual liberation, going against the grain of a heteronormative patriarchy.

“[The women] were oftentimes engaging in acts that would make them defy the kind of norms that were set for these Black women and girls, who were supposed to have these very limited lives,” she said. “Autonomy helped as a developer … to create a different option for living beyond the confines of [the patriarchal] community.”

The next chapter, about witnessing, examines how one can be a faithful witness for their communities facing oppression.

“[Witnessing] is a practice that we have seen since time immemorial within Black and Indigineous communities, folks who have faced violence, who have been able to see the structures of violence and step in the fray from one another and to witness both the tragedies and the trials in these communities,” she said.

She said it is important to recognize that communities are linked together in their struggles, and her chapter about dispossession explores the histories about displacement and how they can impact their futures.

“It’s not just the land, but also of our languages, our customs, our spirituality, our cosmologies — all these different practices that we’ve been torn away from,” she said. “We actually need to begin to think about our histories as very much future by these forms of dispossession and these forms of displacement.”

White colonial worldviews may attempt to dictate what is and is not important in a culture’s history, according to Figueroa-Vásquez, and that is reflected by the displacement of traditional rituals.

Figueroa-Vásquez says that part of seeking reparations includes finding ways to keep a culture’s practices and traditions alive, explaining that repairing the relationship between an individual and their ancestral history is a “reparation of imagination,” as opposed to material reparations.

“These rituals not only bring in Black ancestors but [also] African worldviews; they actually do away with colonial logics and insist that Black lives matter in the past,” she said. “[Black lives] are loved in the present … your ancestors and that those ancestors are necessary and necessary components of the future.”

“You need them to move forward, they open the path for you.”