Paul Hawken, an environmentalist and entrepreneur, spoke about the climate crisis, sustainability and how to pioneer a life dedicated to restoring the Earth during the Oct. 20 UC Santa Barbara Arts & Lectures event, “Regeneration: Ending the Climate Crisis in One Generation.” 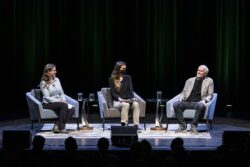 With an emphasis on the importance of beginning Earth’s restoration process now, Hawken called the current generation the reason for an imminent “fundamental shift.”
Courtesy of UCSB Arts & Lectures

Hawken — alongside UCSB moderators professor Sarah Anderson of the Bren School of Environmental Science & Management and assistant professor Liz Carlisle from the environmental science program — dedicated the lecture to expanding on his book “Regeneration: Ending the Climate Crisis in One Generation,” as well as redefining sustainability.

The lecture was one of many features from the UCSB Arts & Lectures “Creating Hope” campaign, which aims to “strengthen human connection, promote emotional well-being, joy and compassion, and envision positive change” within the UCSB community.

Hawken began the lecture by expanding on the term “regeneration,” which he defined as a “radical new approach to the climate crisis, one that weaves justice, climate, biodiversity … into a seamless tapestry of action … that can end the climate crisis in one generation.”

“Regeneration today is being used a lot, today, more and more; and what I mean by regeneration is pretty much the center of bringing the Earth back to life,” Hawken said. “What we can all see if we are aware, listen, watch, is that regenerative road. We can see the end of it. I think we can all stop heading in the wrong direction and do a 180 and head for regeneration.”

With an emphasis on the importance of beginning Earth’s restoration process now, Hawken called the current generation the reason for an imminent “fundamental shift.”

“If you’re 18, 19, 20 years old, the Earth was stolen from you. If you’re going to school right now, I think what you need is skills and understanding that you can give back to the world and make a real difference in the world,” Hawken emphasized.

Prior to the Q&A portion of the event, Hawken stopped to ask the audience how they plan to heal the Earth.

“What are we doing now? Had we imagined a world that isn’t stealing the future, but is healing the future?” he said. “We have to ask ourselves, how could it be that we have the greatest crisis civilization has ever faced? That is regeneration. It’s a question of how we can come to a true solution.”

Anderson and Carlisle, the two moderators, then began asking Hawken a series of questions. Anderson called Hawken’s book a “hope for solutions [and a] hope for change” and began her first question by asking why Hawken wrote his book and who the printed work was meant to “strike a chord with.”

“Regeneration is about agency, it’s about the environment and finding out what it is that makes an impact,” Hawken said. “It’s a call to action … It’s meant to be a resource for human beings who really care about each other and want to do something about it.”

Hawken said that the categories are meant to offer responses to the wide array of variables that contribute to climate change, both individually and systematically.

“If we don’t look at the root of the destruction of the planet, which is industry, then we’re … going to destroy the world just as easily as with coal,” Hawken said. “We get solar panels, windmills, and so forth, but we need action.”

Hawken addressed the “people” category, explaining that those who experience the disproportionate effects of the climate crisis are often not the people causing it.

“We’re a part of this beautiful fabric of humanity. The people in our best cities are actually holding the lives of those who are in the harshest conditions,” Hawken said.

Hawken made the point that women and Indigenous people are a few of those who get the blunt effects of the crisis and it’s why “we need to focus on the climate movement.”

For Hawkens, the solutions listed are ideas of how to restore a world that he believes has been stolen by “corporations and industries.”

“Every single one of these solutions has cascading benefits for people in the world in terms of health, water, dignified living, soil health … we need to look at the world in ways that we can actually really help,” Hawken said.

Throughout the rest of the moderated discussion, Hawken continued to elaborate on the impact individual people have both on the climate crisis and its various solutions, calling humans “inseparably connected” to environmentalism.

Hawken said that people need to be devoted to “bring[ing] back this infinitely complex, beautiful, mysterious thing called Earth. It’s about bringing back what was stolen.” Thus, Hawken continued —  “What we’re doing here then is a requirement. Whether it’s farming, clothing, economy systems, businesses, we need to work together to approach our goal.”

After the Q&A portion, Anderson went on to relay a question brought up by a UCSB student: “How do we work with others who don’t believe in it?”

According to Hawken, individuals aren’t meant to believe in the climate crisis but rather view it as science and proven “truth.” As he emphasized throughout, the climate crisis is more than  questioning whether the environment is suffering or not.

“It is not about fighting for the change, it is about changing who we are, how we see, what we do to generate collective action. It has nothing to do with objectifying something, it’s about being a resource, it’s about regeneration.”