The Daily Nexus
Music
Artsweek on Spotify: Study Tunes To Get Through Midterm Season
November 3, 2021 at 8:23 pm by Lorna Kruesel 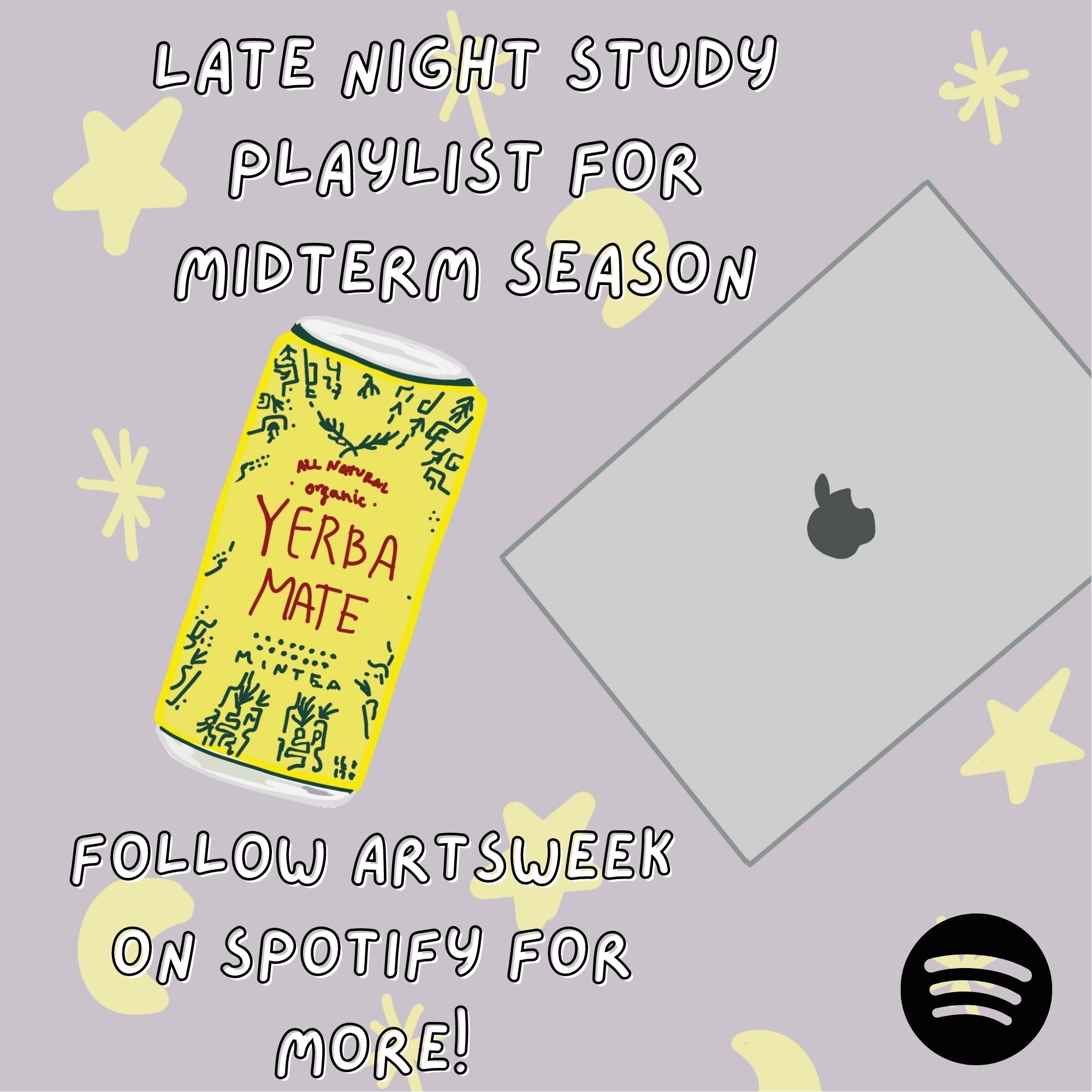 As someone who listens to music every second of the day, I have a playlist for almost any mood imaginable. Some of my favorite playlists are the ones I made to listen to when I need a pick-me-up. The times when I am in desperate need of said pick-me-up are often when I’m studying for hours on end. In high school, I did a lot of trial and error in figuring out what music is the best for me to listen to while doing schoolwork. I found that I can be productive with my studying while listening to music with words. So now, I present to you a little collection of songs I enjoy listening to while studying.

The voice of indie-rock musician Alex G is one of the most calming I’ve ever heard, and I often find myself listening to tracks from his discography right before I go to bed. “Salt,” featured on Alex G’s 2015 album “Beach Music,” contains some of the most gentle and quiet instrumentals he has ever put out, and the track sounds strangely similar to the “Twin Peaks” theme song instrumental, which gives “Salt” an even more numbing feel to it. Similar to many of his other songs, the lyrics are confusing and can feel all over the place at times, but for many Alex G fans such as myself, his talent doesn’t lie in his lyricism but in his ability to take so many different noises and orchestrate them into an auditory masterpiece; some consider “Beach Music” to be reminiscent of British musician Aphex Twin’s early discography.

Big Thief is an alternative rock band that I started getting into during the fall of my junior year of high school, and I vividly remember being up late most nights in the October of 2019 studying for the ACT while Big Thief’s 2016 debut album “Masterpiece” played on repeat in the background. The band’s music provides me with a semblance of peacefulness, which was something that I desperately needed amidst my studying of sentence structure and matrices. “Mary,” which is included on the band’s 2017 album “Capacity,” features some of the most heart-wrenching lyrics I’ve heard in a long time as lead singer Adrianne Lenker sings, “And my brain is like an orchestra / Playing on, insane / Will you love me like you loved me in the January rain?” These lines in particular are so visual, as listeners are transported to the chaotic state of mind of the songwriter, wishing and hoping for the love that once was.

“We’ll Let You Know” by Morrissey

A track I only realized existed because of a “Mid90s” scene, I present to you “We’ll Let You Know” from former Smiths frontman Morrissey. This track is perfectly scored to accompany a specific scene in “Mid90s” in which characters are seen skating down a busy road as the sun sets, but what makes this scene so special is how poignant and touching it is; this film is near and dear to my heart for reasons that I cannot list due to the word limit, but Morrissey’s appearance in the film’s soundtrack adds to its greatness. Morrissey’s voice is iconic; even if you’ve only heard one or two songs by The Smiths, you can definitely recognize the bizarre, almost raspy voice of Morrissey, the band’s lead singer. “We’ll Let You Know” is one of the singer’s most vulnerable tracks. He sings, “You wonder how / We’ve stayed alive ‘til now / We’ll let you know, we’ll let you know.” Morrissey critiques the lack of help those around him provide him with, while simultaneously reflecting on his own personal issues and what led him to that state of mind.

“Nothing Came Out” by The Moldy Peaches

I am absolutely in love with The Moldy Peaches’ self-titled, debut (and final) album, which became an instant favorite for emotional early 2000s rock fans. Many people may be familiar with the track “Anyone Else But You” on their self-titled album, most notably due to its spot on the soundtrack for the 2007 coming-of-age film “Juno.” “Nothing Came Out” is similar to “Anyone Else But You” in the sense that both tracks pull insanely hard on my heartstrings. Kimya Dawson, one of the members of The Moldy Peaches, sings, “Just because I don’t say anything doesn’t mean I don’t like you / I open my mouth and I try and I try, but no words come out.” These lyrics perfectly encapsulate the all-too-familiar feeling of wishing that someone you have feelings for could read your mind and then proceed to fall for you.

Starry Cat, a rock artist based in Maryland, released their 2013 self-titled album to raise money for their friend who was undergoing numerous surgeries at the time. Starry Cat had intended to keep the album to themselves, but in an effort to cover the expenses of their friend’s various surgeries, it was released to the public. This album feels like a warm hug on a cold, winter night. It’s a very short album with a running time of 18 minutes and 48 seconds. Each song is peaceful and has more or less the same guitar chords. Starry Cat sings on this track, “Every winter month, I fell in love.” This is a truly beautiful representation of never-ending love. Sometimes I struggle with believing that love truly lasts, that falling more and more in love with someone every day is possible. This album was made completely out of love and is a personal go-to for when I need a reminder that true love does indeed exist.

Sonic Youth is undoubtedly one of the most influential rock bands. They released albums in the 80s, 90s and 2000s, proving their talent time and time again. “Turquoise Boy” comes off of the band’s 2006 album “Rather Ripped,” which featured tracks such as “Incinerate,” “Jams Runs Free” and “Do You Believe In Rapture?” “Turquoise Boy” is an incredible build-up track: The beginning is slow and mellow, consisting of simple piano chords and the buttery voice of Kim Gordon, but starting at about the 2:40 mark, the song becomes much more guitar-based, with an incredible bass solo that wows me every time. I’d argue that the entirety of “Rather Ripped” is a perfect album to listen to after a long day of studying, filled with a distinct sense of energy yet showcasing some of Gordon’s softest vocals to date.