When second-year UC Santa Barbara communication major Aja Blair first smelled the smoke from the Alisal fire, she thought someone was having a barbecue or a bonfire. Blair grew up in New Jersey, and having never experienced wildfires before, she was unaware of their effects. 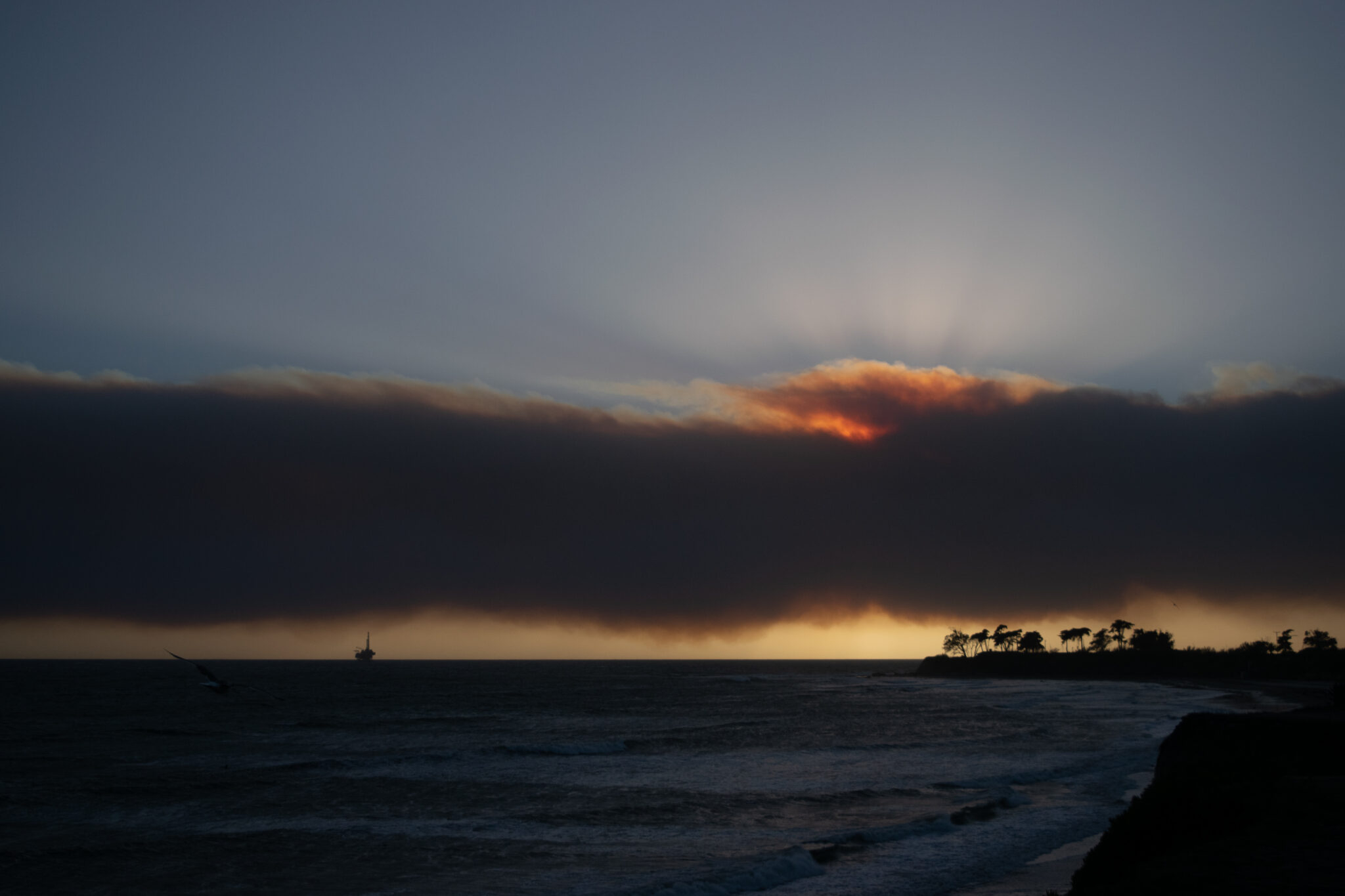 During the week of the Alisal fire, Sanchez said the air quality took a direct toll on her health. Sydney Haupt / Daily Nexus

A few days later, however, Blair’s asthma flared up due to the poor air quality and she was forced to stay home, despite in-person classes still being in session.

“I wasn’t able to go to my classes last week,” she said. “It was difficult for me even being outside for a couple of minutes. The smoke was so bad that I had to use my inhaler that I haven’t used in probably three plus years.”

The Alisal fire, a vegetation fire that started at Alisal ranch and is currently 97% contained, began burning on Oct. 11 and remained 20 miles away from UC Santa Barbara at its peak.

Air quality level index reached 160 briefly and an Air Quality Alert was issued for Santa Barbara County, according to a university statement to the campus community. However, despite concerns surrounding air quality, the university never made any decision to evacuate students or halt classes.

The only communication from the university regarding the fires were three emails sent to the campus community, two on each Oct. 11 and 12 informing individuals the fire is not a threat to campus and a third on Oct. 15 being a message from Chancellor Henry T. Yang, assuring students of the campus’s safety during the fires.

“While we do not anticipate that our campus’s air quality will reach the sustained levels of particle pollution that would necessitate a mandatory curtailment of operations, we are closely monitoring the situation,” the email read.

For out-of-state students like Blair, California wildfires were considered an unfamiliar phenomenon. Second-year environmental science major Isabella Ramirez grew up in New York and said that the fire did raise mild health concerns, but she was not overly concerned for her safety due to the experiences and the perspectives of her Californian classmates.

“I was definitely more cautious, especially walking outside. I wore my mask when I was outside because I could literally feel the smoke,” she said. “But other than that, I wasn’t necessarily too worried because [people who lived in California] weren’t worried so I was like ‘Okay, like, we’ll be fine,’ … we can see this smoke, but ultimately we weren’t in any actual danger.”

Blair said that she wished the university had given more information so those unfamiliar with fires were more informed.

“Since I’m not used to experiencing wildfires, I didn’t really know if 20 miles was a lot or if the air quality when it’s at 115 is bad,” Blair said. “I wish UCSB gave us more information explaining what the air quality is and how to stay safe. You want your school to tell you exactly what is going on.”

Third-year art major Giselle Woods agreed that the university could have been more proactive in protecting students from potential health risks, even converting classes to a temporary online format.

“A part of me does kind of wish or wonder why they wouldn’t cancel more classes or just evacuate more students when they saw that the air quality was so poor on campus,” Woods said.

“Because even though the fire wasn’t too close to us, the fact that they saw that the air quality was that bad, I would think that you would want your students’ safety as your main priority, even if that means having classes online, I think they should have prepared for that a little better.”

Woods, who grew up in Camarillo, California, witnessed the 2017 Thomas Fire.

“We were affected by the fires in terms of the sky and smoke and ash, and we did have to miss school because of the air quality,” she said.

Despite her past experiences with local fire and personal precautions, she said she still worried for her health due to sustained smoke exposure.

“I was a little surprised that we were walking around, even with masks and all, the air was horrible quality. I did kind of worry about my lungs and I didn’t really want to be outside for too long,” she said.

Second-year communication major Jameela Sanchez hailed from Madera, California, and after consistently hearing about wildfires, said it was difficult to take the fire seriously when it never directly affected her.

However, during the week of the Alisal fire, Sanchez said the air quality took a direct toll on her health.

“I actually got really sick from the smoke. I started feeling nauseous, I was actually in bed for a couple of days, I was taking cough drops and stuff and kind of nothing would help my throat,” she said.

Though health was a main concern for many students, the Alisal fire forced others to relive their previous experiences with wildfires. Second-year biology major Carissa Mindemann grew up in Santa Rosa, California, and lost her home in the 2017 Tubbs fire.

“Four years ago, the Tubbs fire hit my town. It was probably one of the worst fires because they were very unprepared and my house happened to burn down in that fire too. Since then, I’ve been evacuated three times now, and there’s constant red flag warnings almost every winter,” Mindemann said. “Initially, hearing about the fire [being] 20 miles from UCSB was very triggering. It was just a feeling of anxiety that was way too familiar.”

Mindemann said that she wished the university recognized how the smoke would impact each student, and provided information about how to deal with the air quality.

“I think the school could have recognized that this does affect every student differently. The smoke is also something that I think the school could have handled a lot better because kids that are from out of state don’t know how to deal with it,” Mindemann said. “Even if it looks smokey, the way the air looks doesn’t always indicate how the air quality actually is. I think more information on what to do if you are a sensitive group could have definitely been beneficial.”

Following her experience with her home in Santa Rosa and the anxiety brought on by the Alisal fire, Mindemann said she leans on those close to her for support, and advises others to do the same.

“My recommendation to anyone experiencing anxiety about fires is to lean on those that you know care about you. Call your loved ones because at the end of the day, that’s what matters most and that’s what I learned, after losing so many material items.”