The Daily Nexus
Events
Santa Barbara’s Hidden Gem: The “Pianos on State” Initiative
October 28, 2021 at 9:50 am by Lola Watts

Pianos on State, a local favorite which features bright and colorfully painted pianos throughout downtown Santa Barbara’s State Street, is an annual event that can most simply be described with a verse from Kanye West’s track “Diamonds from Sierra Leone,” in which he declares, “Close your eyes and imagine, feel the magic.” 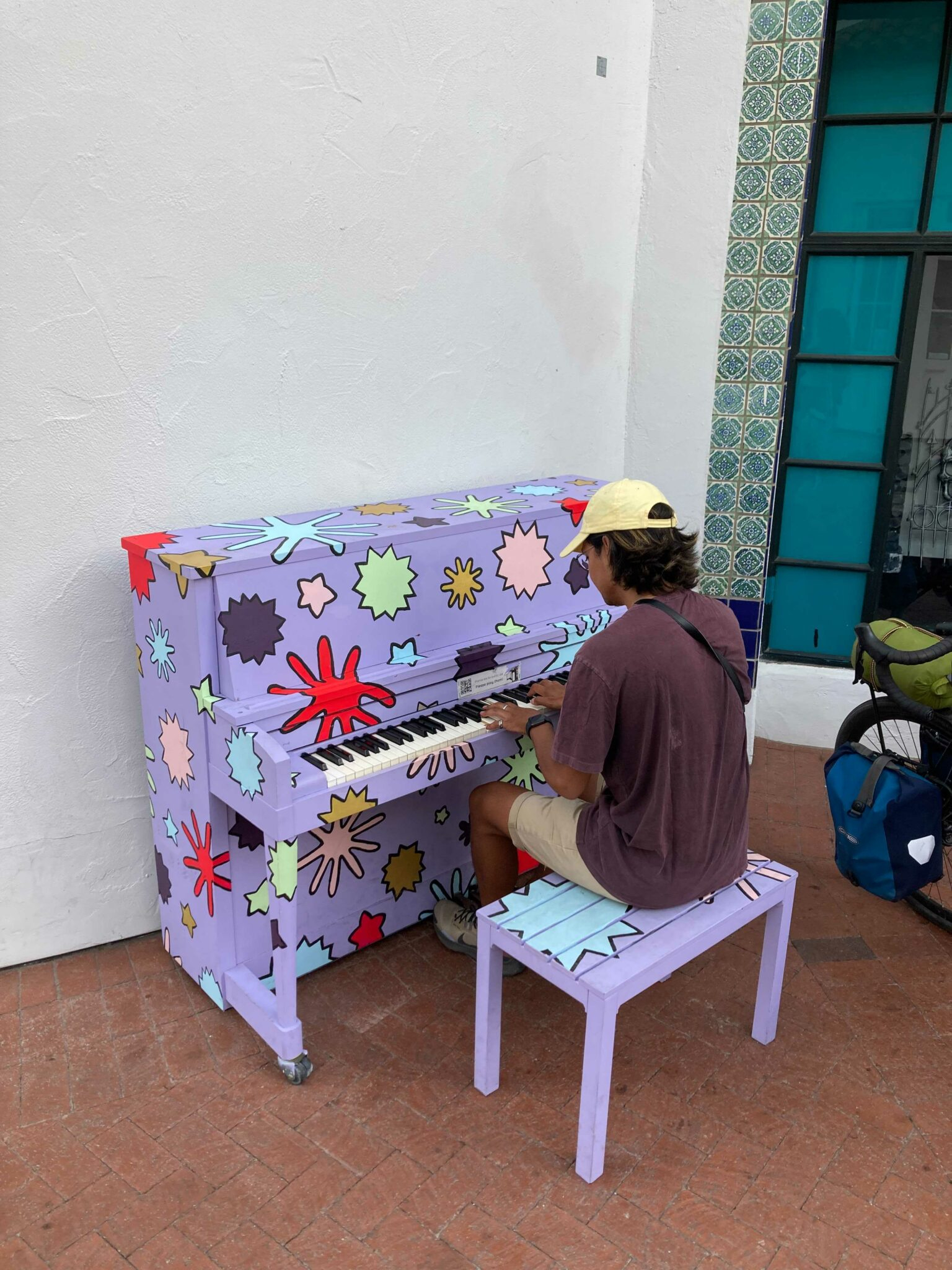 Strolling down State Street with your eyes shut certainly would induce some sort of euphoric — even magical — feeling, as the Santa Barbara County Office of Arts and Culture lined every corner of the road’s 10 blocks with pianos for the exhibit, which opened Oct. 5 to Oct. 22. The interactive display, which has occurred annually since its inception in 2009, aims to invite people from all backgrounds to engage in local arts and culture in the form of hand-painted pianos interwoven between the restaurants and boutiques along State Street.

As visitors wandered along the blocks, the reverberant and melodic sounds of the different pianos could be heard, with each block housing its own unique musician and piano combination.

The first block on State Street was filled with the gentle opening lines of Beethoven’s “Für Elise,” and the musician played each chord with an eloquent grace that can only be attributed to years of past piano experience. On the next block, a woman being slowly circled by a partner with a video camera softly sang along to the ascending piano theme that she pressed into the keys. The third block featured another talented female musician exuberantly playing as a crowd of people gathered around her, forming an impromptu audience in awe of a hidden talent on the streets. Finally, the crowd listened as a group of young adults played a messy rendition of Sufjan Stevens’ “Mystery of Love” after stepping out of a neighboring vintage shop.

Throughout each of the blocks, different melodies could be heard as they crashed against and complemented each other — the music rising and falling away like invisible crescendos — as pedestrians continued to make their way down the streets.

Like the distinctive musicians who sit upon the piano benches, each instrument features a unique customization. The Pianos on State event noted that this year’s artists — 17 collective individuals and groups — all contributed to the originality of each hand-painted keyboard from each other. One piano that caught everyone’s attention, in particular, was the amber-colored vessel with intricately painted bees and honeycombs along its bases. Other pianos housed the handprints of the artists themselves as a reminder that this event has been coordinated with care. The uniqueness of each piano also complemented the uniqueness of the various passersby who took some time out of their hectic commutes to momentarily pause and play a song in the streets.

There definitely was a certain shock value that came with witnessing a seemingly ordinary person whip out a near-perfect piano solo. It was even more shocking to see a quiet individual sit on a piano bench and, without any warning, sing with perfect pitch while effortlessly playing an accompanying instrument.

However, skill level truly did not play a role in who was allowed to perform, as there were individuals from all walks of life participating in the impromptu mini recitals. Performances could be found within a person taking a stroll and hankering for a solo as well as within the couple watching each other in awe as the other plays from the distant memory of a once-mastered song. Regardless of the musician, the hidden talents of the streets of downtown Santa Barbara became more than apparent through the Pianos on State event.

After a while, however, the faces of the strangers and the notes all blend together and end up turning into something quite simple yet magical: music. Together, the performers all create the enchanting sounds of melody that resonate with all of us. Witnessing these hidden talents, even in the quick moment that a pedestrian strolls past a musician, certainly produces the prospect of hope in seeing the beauty that a passerby can create by simply sitting down on a piano in public. 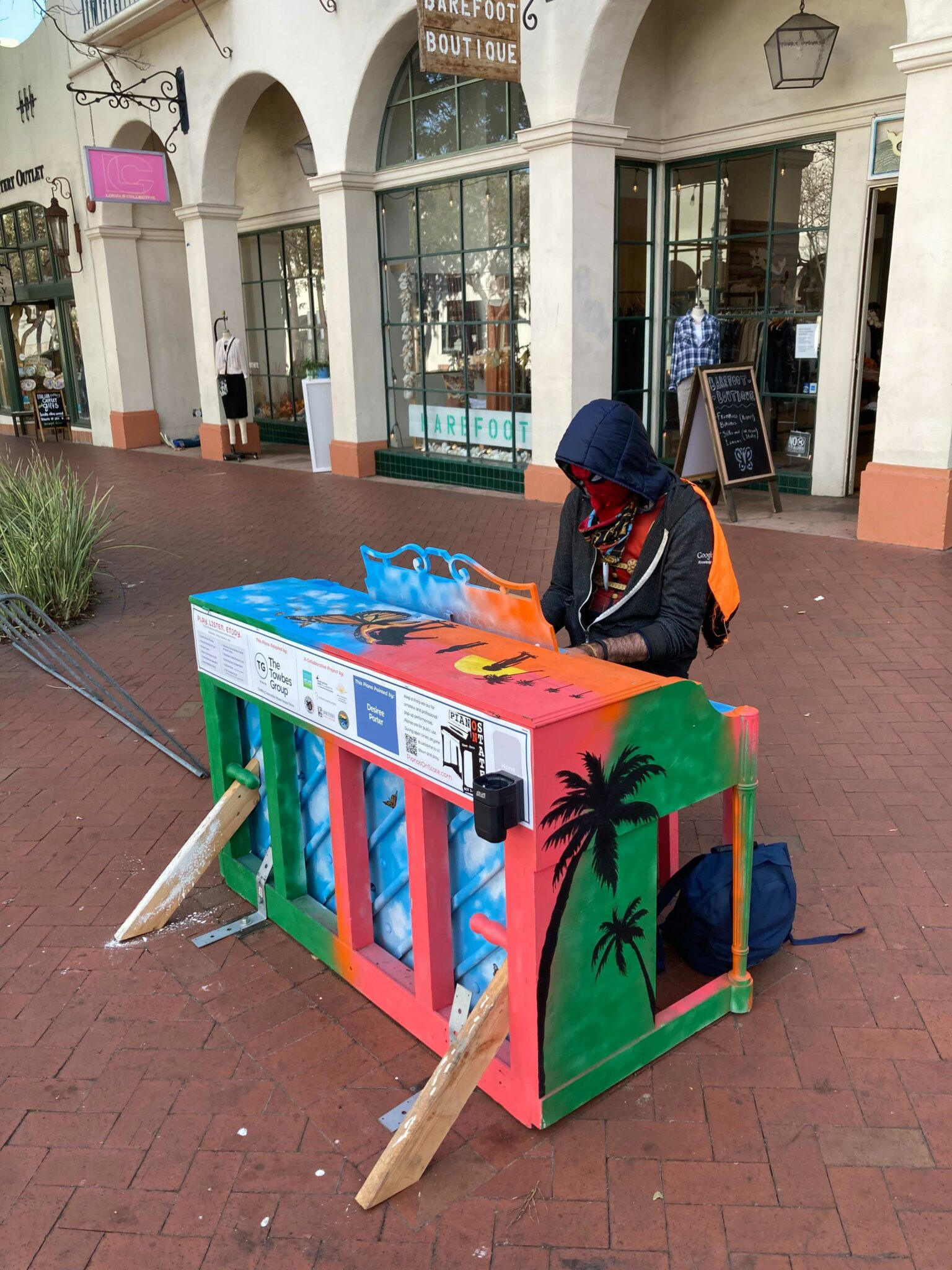 The catchphrase of the event very concisely embodies the spirit of the exhibit: “Play, Listen, Enjoy.” Really, that is all that music asks for. Even in attempts to play a piece riddled with wrong notes, there was a distinct beauty in hearing music fill up the streets.

The Pianos on State event proves that music itself is a unifying agent and that strangers walking along the street might just be a hidden virtuoso, their talent only revealing itself once they sit down at an instrument and play. When they do, though, there is a feeling of hope that emanates through the air — that might just be the most wonderful part of all.

“reverberant and melodic” and mostly awful with sustain pedal locked on!
A nuisance is what this “noise” is!

UCSB is a cancer on Santa Barbara

Who gives a flying fuck?