The Daily Nexus
Music
In Review: Want Self Esteem? Listen to Her New Album, “Prioritise Pleasure”
October 28, 2021 at 9:56 am by Sam Franzini 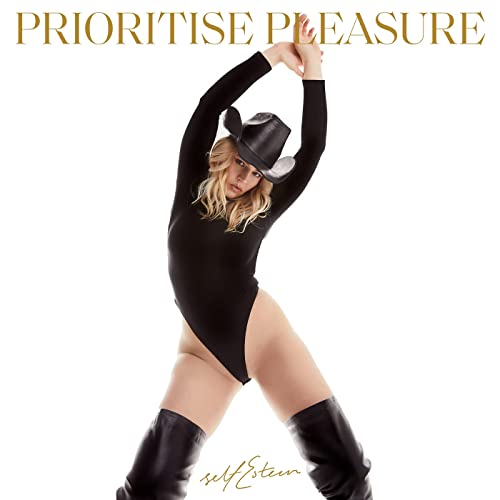 Rebecca Taylor, the woman behind Self Esteem, is clearly an outspoken human, which is a weird thing to say. But her lyrics paint a vivid picture of life just as it is: No wild parties, no extremely low moments. Just the raw middle, which is left mostly untouched in music today. “All my upcoming work is exploring how complicated it is to just be a human. I’m wonderful and I’m terrible,” she said to NME. This is evidenced in her complex writing — on “I Do This All The Time,” she sings, “You’re beautiful and I want the best for you / But I also hope you fail without me.” Taylor’s taken on the task of combining bold, brash pop music with piercing and honest lyrics, and on her second album, “Prioritise Pleasure,” released on Oct. 22, it all comes together.

“Hobbies 2” is chock-full of so many one-liners it’s hard to just pick the best ones. Essentially, Taylor says, “I’ve got time to have this fuck buddy, but only if I’m not busy.” The song encapsulates the awkwardness of dating today: “Let me fuck up your sheets and then leave with no kiss / And admit that we both can’t do deeper than this,” she says the third verse. The chorus is fun and explosive, featuring the cutting lines “If you’re looking for a hobby / Baby, we can have some fun / Anything to prove I’m living / Anything to prove we’re free.” The lyrics diving into hookups and more-than-friends, less-than-dating culture are honest but witty at the same time. “I think that’s a very modern thing to have committed to a song,” she told Apple Music.

The title track is a brash, jarring banger about putting yourself first. It starts off small, with Taylor saying “Listen to my body / We haven’t been in touch much lately.” But as soon as the chorus plays, you’re hit with a wall of electric sound so harsh you might check if your headphones are broken. It’s joined by a choir, singing the theme that repeats in the album, “So I’m breathing in / One, two, three / Prioritise pleasuring me.” Abrasive at first, but you’ll be shouting along “That’s just for me!” after Taylor describes self-care practices like unfollowing people and sleeping in. But against the overwhelming sound, delicate lyrics poke out, like at the end, when she repeats, “I thought that you’d be kind to me.” It looks like she had to take matters into her own hands.

“Moody” opens with one of the greatest lines in the history of music: “Sexting you at the mental health talk seems counterproductive.” It’s met with a harsh sound reminiscent of the title track but quickly transitions into a funky, upbeat tune during the chorus, where she repeats, “Oh, M-O-O-D-Y / You know I-I-I’ll be moody for life” that is impossible not to hum along to. “[It’s]  about reclaiming being a moody cow…” she told Apple Music. “Lately I’ve been realizing as a woman in this world, especially as a woman in the music industry, of fucking course I’m moody!” She hints at her nature in the song, saying, “This has got nothing to do with you / It’s always been my problem, my problem.” It’s a reaffirming song for days when you’re in a rut, but the energetic tone of the song can celebrate how moodiness is to be expected.

Though the album is usually loud and harsh, moments like “I Do This All the Time” are softer, reflections of herself and her identity. The song is written to a younger version of herself, but the lessons she sings can be applied to anyone. It starts with and features a difficult line: “Look up, lean back, be strong / You didn’t think you’d live this long.” It’s not all depressing though, the lines interspersed in the song are hopeful and empowering: “Stop trying to have so many friends / Don’t be intimidated by all the babies they have / Don’t be embarrassed that all you’ve had is fun / Prioritise pleasure.” The chorus, like on the title track, has a choir repeating Taylor’s words, but it’s stripped-back, leaving all of the emotion there. The music video for the song features Taylor literally hugging her younger self, as if the song alone wasn’t powerful enough.

The brutal, angry opposite to “I Do This All the Time,” “How Can I Help You” pivots and faces outward to critics. “Being told that I am underrated or intimidating, I just felt very fed up,” Taylor told NME. “I guess I’ll be eternally angry for the way, as a woman, unless you’re sweet, nice, settled, and quiet, you’re considered ‘different’ and ‘difficult.’” The song is propulsive and moving, firmly in control but also bewildered: She shouts that she has no clue what’s going on throughout the song. Socrates had said, “I know that I know nothing,” and we have Rebecca Taylor saying “I don’t know shit.”

One flaw in the album is that sometimes, with the instrumentals so intensely bonkers, they disguise the lyrics. On the title track, she says, “As I willed a sunset to go quickly / Always thinking what next / Never have I just enjoyed the moment happening right now,” and on “Hobbies 2,” she laments, “But logic prevails, I don’t hope anymore.” But with the background so new and distracting, it’s hard to make them out, similarly to MARINA on her debut album “The Family Jewels.” Thankfully, the last third of the album, especially “John Elton,” is mostly subtle and raw.

Listening to “Prioritise Pleasure” invokes a range of feelings. There’s something about Taylor’s sound and lyrics that are so distinctly human that it forms a familiarity — as if you went to high school with her and are now witnessing her stardom. She’s the friend who calls you immediately after a bad date or night out, laughing as she describes what happened. She’s the author of the self-deprecating tweet that you shared with your friends. She’s a future pop star who’s funny, bold and brash and who has created music like no other on this album.