The Daily Nexus
Events
A.S. Program Board Presents a Spooky Treat: Pumpkins and Puppies
October 24, 2021 at 9:50 pm by Katie Lee

As midterm season is in full swing, Associated Students Program Board came through with a shining ray of hope in Storke Plaza — puppies and pumpkin painting! What more could a stressed-out college student ask for? 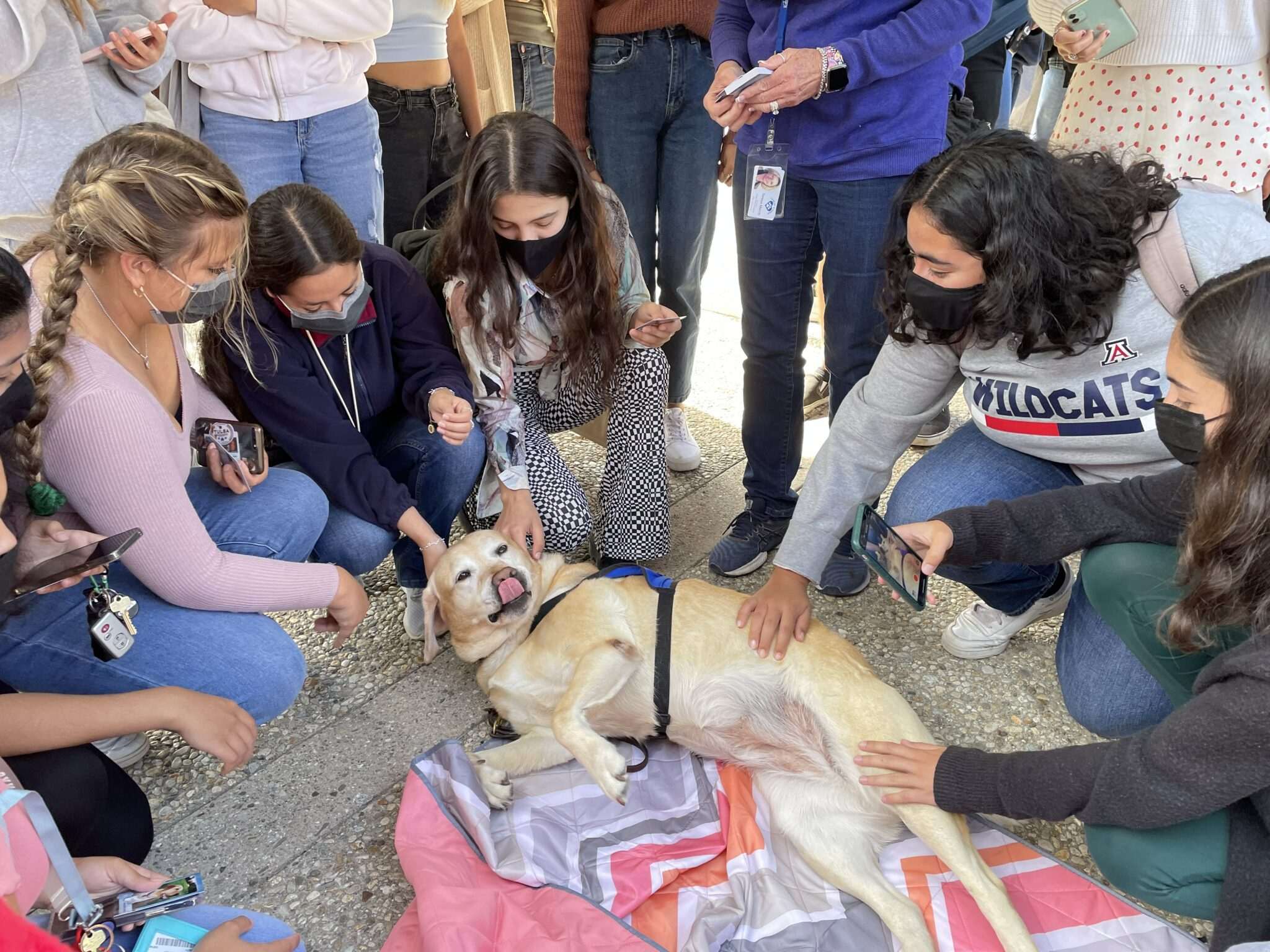 This event, which took place on Thursday, Oct. 21, was put on by Associated Students (A.S.) Program Board to allow students the opportunity to pet some puppies and grab free pumpkins to paint with friends! A.S. Program Board coordinator Emily Kocis, who was involved in planning the activity, explained that “there’s been a lot of stress around midterms and coming back to school, and I definitely wanted to do something that was a kind of a stress break for people.”

And a stress break, it was. The weather outside was sunny and bright that afternoon in the busy plaza, and as the campus’s beloved campanile struck one o’clock, a sea of students sat excitedly on the steps as they waited for the furry friends to arrive. Miniature pumpkins perched on a table to the side, soon to be adorned with the creative visions of the students.

As more students gathered underneath Storke Tower, one important question started to emerge among the onlookers: “Where are the puppies?” Impatient and curious whispers were brewing in the masses, but luckily, they didn’t have to wait too long. “Love on a Leash” quickly arrived on the scene as Nala and Toby the labradors, Sam the pug and Maddie the golden retriever eagerly stepped on center stage, all tails wagging.

“Oohs” and “awws” immediately erupted from the crowd as they saw the adorable pups. Students were buzzing with excitement as Kocis quickly welcomed them and gave a brief introduction, and then students quickly flocked to their desired forms of stress relief, some groups making a beeline toward the different therapy puppies and others heading over to the table of pumpkins.

First-year student Elisha Mata, who heard about the event via Instagram, “really enjoyed getting a pumpkin … I’ve been really wanting to [decorate a pumpkin] and just hadn’t had a chance.” It’s easy to forget about the prospect of Halloween with the commotion of midterms happening right before. Students were busy cramming for important tests and putting aside thoughts of the spooky festivity until after the busy weeks, and Mata herself had been tirelessly studying the past few days, but she thought that this event “was a really great opportunity to come out of my room and actually have something to do.”

Each student chose unique looks for their pumpkins, ranging from oddly shaped patterns to the classic creepy faces. When decorating her pumpkin, Mata chose a “Milky Way” look — filled with colorful stars, aliens and planets. Appropriately, she also wrote “I love UCSB!” on the front. While not necessarily the traditional form of pumpkin carving, painting was a fun and relaxing treat in anticipation of the coming holiday.

A few steps away under some canopy tents, groups of students were gathered around the different dogs. As Kocis explained, the puppies belonged with the group “Love on a Leash,” which has previously worked with UCSB’s Health and Wellness department for their dog therapy events. Since Health and Wellness opted for an online event this year, the puppies from “Love on a Leash” were given another opportunity “to interact with students” through the A.S. Program Board, “and so they were really excited to help us out!”

Both the students and puppies alike were overjoyed at the event. While some of the puppies — like Sam and Nala — enjoyed lying comfortably under the canopies, Maddie and Toby ran around to see all the new faces, excited from the flurry. Each dog was showered with belly rubs, head pats and behind-the-ear scratches. Meanwhile, the students enjoyed connecting with the pups and watching the lovable displays.

Second-year student Jack McKinnon was “loving the event … it’s great because I have a dog at home.” For students missing their pets, the experience provided a little relief and a reminder of their cute faces. Each of the puppies themselves were friendly and sweet, such as Sam the pug who thinks the best thing ever is “meeting new people.” You can follow him @bananas_for_sam on Instagram!

Pet therapy is proven to have valuable benefits: lowering stress levels, alleviating fatigue and anxiety, etc. McKinnon thought “meeting the variety of dogs” was his favorite part of the event as it really “took your mind off of [midterms] for a second.” Being showered with kisses from cute puppies was definitely a great way to distract from the tension of midterms. Even as the event drew to a close, students continued to flock in to meet the different pets.

The A.S. Program Board’s decision to give a little break for students proved to be wholeheartedly rewarding for those involved. Smiles were seen all around from the therapeutic experience, students leaving a little lighter and relaxed. Who can complain about this perfect mixture of spooky pumpkin painting and cute therapy puppies?