As UC Santa Barbara students begin their fourth week of fall quarter, many are still struggling to obtain their Access Cards for the 2021-22 school year as an Access Card shortage persists. 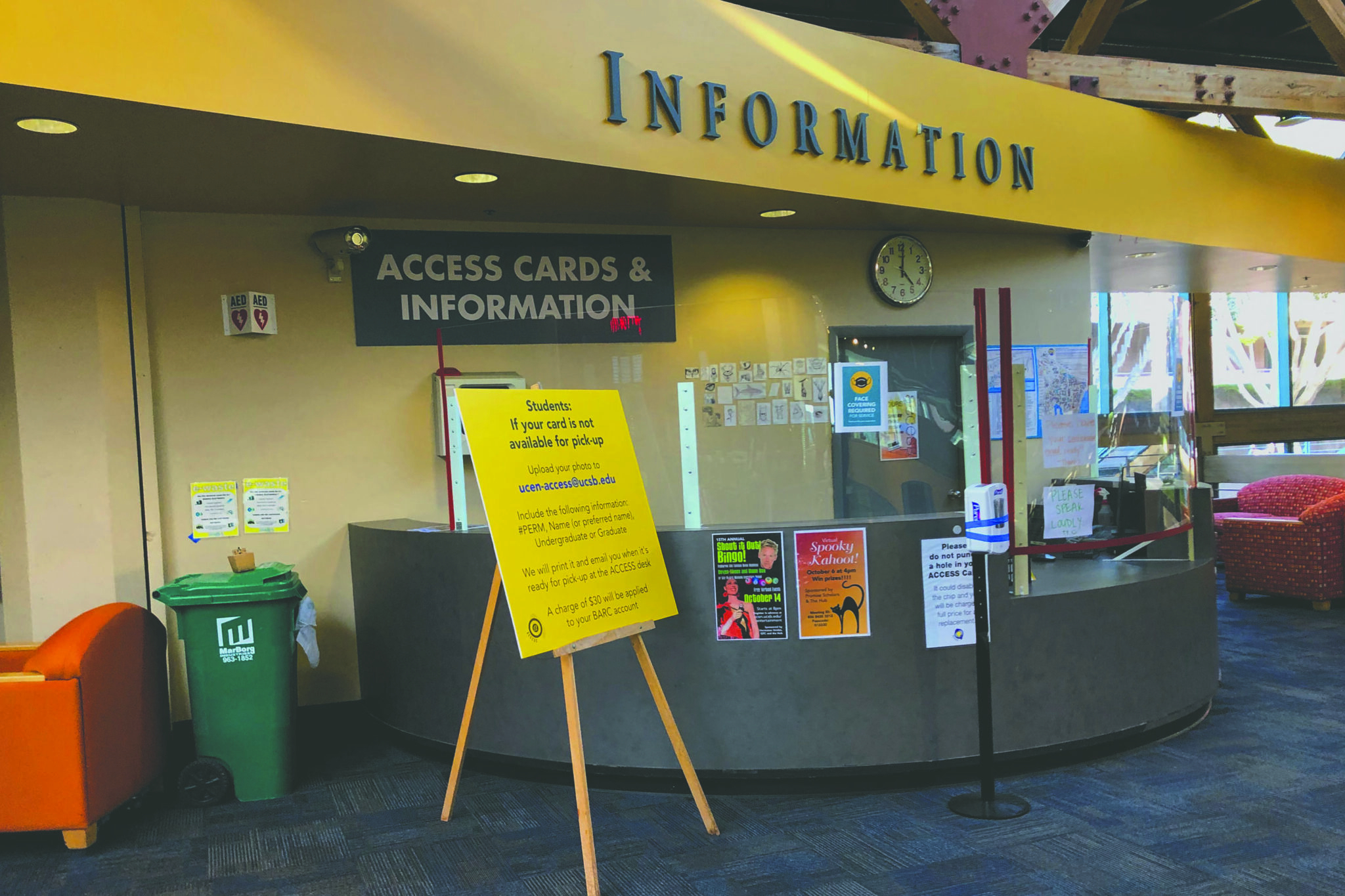 The campus University Center (UCen) did not respond to multiple requests for comment about the card shortage from the Nexus. Karla Marin / Daily Nexus

Access Cards are the official identification card for UCSB community members and are issued to all members of the campus community. The cards are crucial for student identification, required to access campus services and facilities and offer access to prepaid accounts for making purchases on and off campus, according to the UCSB Access Card website.

However, many students on campus still have not received their Access Cards for the 2021-22 school year. In response, the facilities that usually require Access Cards have compensated for students without them.

The campus University Center (UCen) did not respond to multiple requests for comment about the card shortage from the Nexus.

Many students have expressed frustrations with the inconveniences that occur without having an Access Card.

“The only way it has affected me is that I have to wait in a longer line when I want to go eat at the dining commons — most of the time the line for those who don’t have Access Cards is way longer,” first-year actuarial science major Emmanuel Corona said.

Corona said an issue he had with not having his Access Card was difficulty clocking in and out of his work.

“I got hired and I didn’t know that you had to use your Access Card to clock in and clock out, and since I don’t have one, I have to write down the time I started working and the time I left,” he said.

Corona tried multiple times to receive his Access Card, to no avail.

“On Sept. 19, I sent my Access Card request and I didn’t get a response,” he said. “I went to the UCen later that month to see what was up with my Access Card and they still didn’t have it. I’ve gone to the UCen, like, three times in total to see if they have my card, and they have just told me to wait.”

However, Corona recognized the efforts the university made to allow students to access campus facilities and services without an Access Card.

“I think they have compensated in a way that they manage to get around and find alternatives to the Access Card, like saying your perm number and such,” he added.

Second-year undeclared major Rohan Solanki said that although not having an Access Card has not severely impacted his life, he thinks the university could have taken better measures to ensure that more students could get their Access Cards sooner.

“I’d say it’s made my life slightly inconvenient, just getting into the Rec Cen and dining halls. Everything takes slightly longer than it should take. I think they could’ve been better prepared and should’ve communicated better with students,” Solanki said.

“It’s pretty annoying, albeit not the worst thing in the world,” Ma said. “I think they did the bare minimum which was to just let you go places without your Access Card, but by having to basically present everything else separately is pretty problematic.”

None of the students interviewed have received any information on when they will receive their Access Card.

Fifth-year feminist studies major and Student Advocate General Geovany Lucero said that they have not received concrete answers from administration on why many students have not obtained their Access Cards yet nor when the university believes students will receive them.

However, Lucero said the root of the issue was technological, as there was a malfunction on the coding of the Access Cards.

“It was a malfunction on the actual coding and programming of the Access Cards,” Lucero said. “We were swiping but it just wouldn’t read.”