Following the findings of the 2020 U.S. Census, counties throughout the country are redistricting — a process in which new electoral boundaries are drawn based on data from the census. 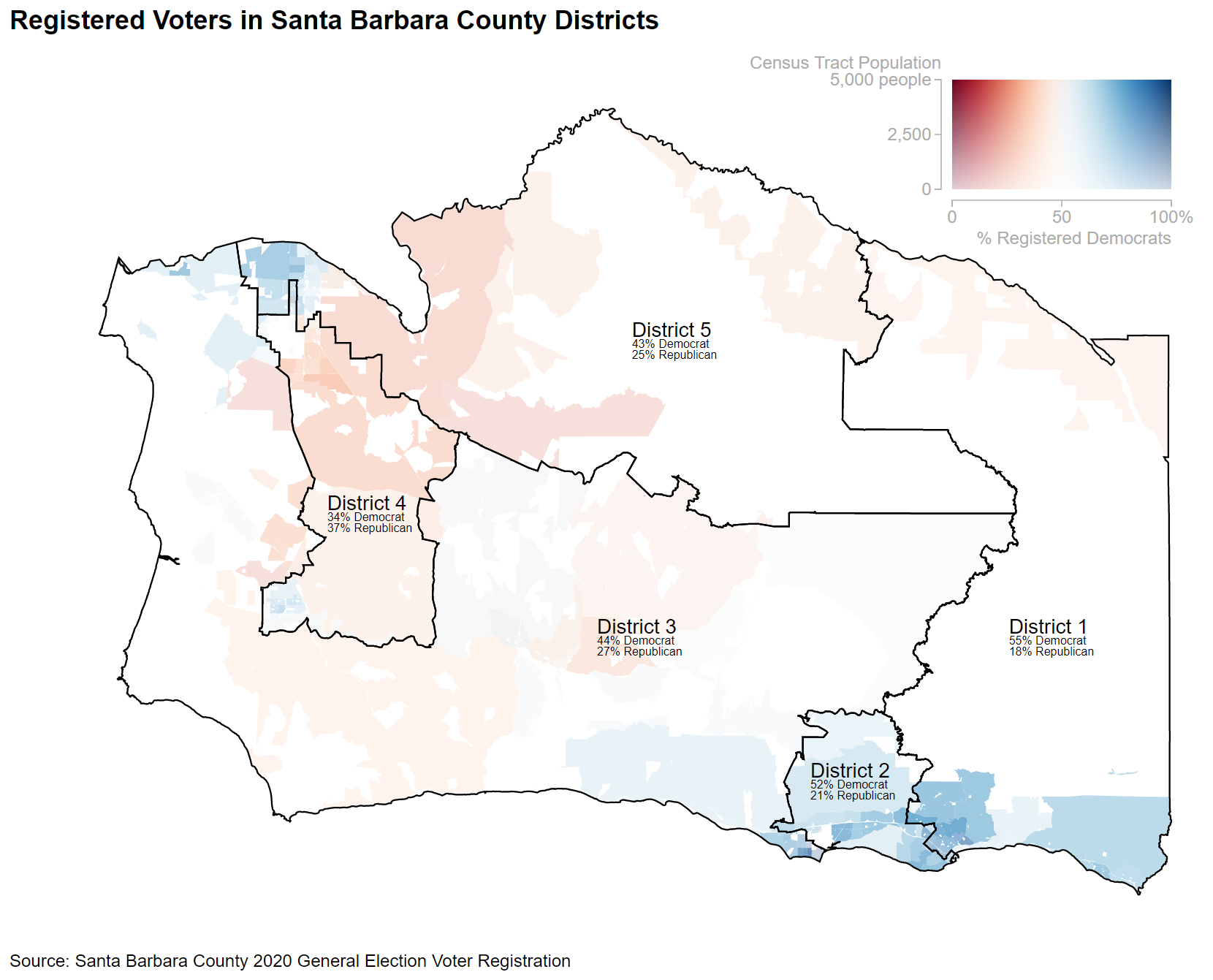 This map shows the current district boundaries in Santa Barbara County as well as their political composition based on voter registration in the 2020 general election. Census tracts are colored to show the percentage of registered democrats out of democrats and republicans as well as the population in the census tract.

In Santa Barbara County, residents are being encouraged to participate in the redrawing process by providing input during the Santa Barbara Redistricting Commission’s meeting or by submitting a map with redrawn lines to the commission’s website.

“This is why we’re asking for people to get involved and share what they want their districts to look like. Political competitiveness of a district is something that is not specifically defined by both the Federal Voting Rights Act or Measure G,” Turley said.  “However, we are tasked with making sure that we are properly representing communities of interest. So if you have large blocks of people voting together in the same way on county issues … You do not want to be splitting communities of interest that vote together.”

“I think the third district, as it is right now, or as it was drawn 10 years ago, actually has a really important logic behind it. And that is that the third district is providing a voice for small cities and unincorporated communities,” Brandt said. “It serves as a voice for those residents who often are very dependent on county services because they don’t receive the same level of services that you would if you were living in the City of Santa Barbara, or the City of Santa Maria.”

For Isla Vista, redistricting is important because although the UC Santa Barbara college town is currently in the third district of Santa Barbara County, some of the maps that have been submitted thus far split the campus and Isla Vista into two different districts — a practice that Brandt described as “packing and cracking.”

“You’d be cracking [the voting] power of a community that is one whole community and making our voting share less, and in two districts rather than whole and in one district,” Brandt said.

Brandt added that the student community in Isla Vista — including K-12, undergraduates and graduates — is one whole community that should be kept together in one district.

“In Isla Vista, we have dealt, for many years, with more conservative elements in our county that have claimed that students voting is not legitimate for some reason,” Brandt said. “Students are a permanent population in our county. Students pay taxes, students utilize public services and we deserve to be kept together in an inclusive way.”

If Isla Vista gets split between two districts, there would be two representatives from the Board of Supervisors assigned to the area.

Brandt said that splitting Isla Vista would also make acquiring municipal services difficult, since two supervisors would be involved instead of one.

“You’re now working with two different supervisors at the same time, and especially in a community like Isla Vista where we rely so much on the county for our municipal services because we’re an unincorporated area, that would be very difficult,” he continued. “Mechanically, when it comes to anything that we do — whether we’re going to the county to try and find support for something like the community center, renovations or whether we are making input on their policy when it comes to our libraries for example —  just having to work with multiple supervisors, it gets very difficult.”

“I would be somewhat concerned that the second district supervisor would not not be in the right headspace to deal with the university constantly. I feel like the [role of the] third district supervisor is to be an external negotiator with all of these other entities that exist outside of the county’s jurisdiction. And I think that by moving that interface with the university to a second district, that would probably harm the Isla Vistans’ ability to get attention and be able to make a strong stance,” Freeman said.

Freeman added that the political consequences of being moved into the second district for Isla Vistans would not be “horrible.” However, Freeman said that splitting Isla Vista would have “devastating” consequences.

Turley said that she heard that Isla Vistans do not feel engaged in the redistricting process from attendees of the most recent Isla Vista Community Network meeting on Oct. 14. Though the deadline to submit a map online was Oct. 18, the commission is informally extending the deadline for submissions to Nov. 4, Turley said in an interview with the Nexus.

“Being there at public meetings, taking a look at the maps online, sending in your comments about where you think the lines should be different or the same — that’s all extremely helpful feedback,” Turley said.

The Nexus reported in September that Isla Vista might have an undercount in the census since many students were living with their families, and not near campus, from March 2020 to June 2021 due to remote learning. Turley echoed the same concerns and added that, because of the undercount, students should be actively involved in the redistricting process now to avoid losing any more potential voting power.

“In some ways, it’s even more important for students to have their voice heard in this process because they may have been undercounted in the census,” Turley said. “We can’t extrapolate outside of that data, but we know that the data doesn’t tell the whole story. And so that’s why we need students, people who live in Isla Vista who experience what it is like to be in this community, to tell us what is most important for them.”