The Daily Nexus
News
Students Discuss the Correct Usage of Hispanic, Latino/a and Latinx
October 15, 2021 at 11:00 am by Pricila Flores

As National Hispanic Heritage Month comes to a close, the Nexus spoke to the UC Santa Barbara community on the correct usage and implications of the terms Hispanic, Latino/a and how they feel about the ‘x’ in Latinx. 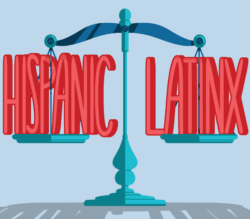 Sept. 15 to Oct. 15 marks National Hispanic Heritage Month, and during this time period, this pressing question has been discussed at UCSB — spurring pieces like “What’s the difference between Hispanic, Latino and Latinx?” This conversation is also occurring in the greater Santa Barbara community, where the Santa Barbara Unified School District recognized Latino/a/x Heritage month and National Hispanic Heritage Month on Sept. 14.

The terms Hispanic, Latino and Latinx are often used interchangeably. The term Hispanic refers to people from Spanish-speaking countries and also relates to Spaniards. This term, coined by the government in 1980, was used primarily in government documents. The term, according to some, was problematic because it included people from Spain.

Ethnicity labels, such as Latino, Latinx and Hispanic, are a topic of discussion amongst people in various ethnic groups as the language changes.

The emergence of the term Latinx began in the late 1990s. The ‘x’ in Latinx represents gender fluidity and allows people who identify as non-binary a sense of flexibility.

According to UCSB linguistic professor Jesús Olguín Martínez, the controversial language change can be attributed to the fluctuation in socio-cultural factors.

The emergence of this new term, Martínez said, has created controversy in Mexico.

“From a prescriptive perspective, many people in Mexico are criticizing the use of ‘x’. This stems from the fact that Spanish is a language with a clear grammatical distinction of gender,” Martínez said.

“The socio-cultural impact has been negative in various parts of Mexico. Prescriptive people are criticizing the use of this word on the grounds that this is destroying the purity of Spanish.”

“I don’t think there is a proper term to use since I feel like everyone has the right to use whatever they feel comfortable with identifying themselves,” said fourth-year psychological and brain sciences major Jocelyn Lemus-Valle. “However, I also believe that these terms shouldn’t be used as a way to [generalize] large groups of people.”

Second-year re-psychological and brain sciences major Alexa Jimenez believes some of the terms can be synonymous with each other.

“They can be used interchangeably. For example, Latino and Latina when referring to genders and Latinx is more of a gender-neutral reference.” Jimenez said.

“My impression is that Latinx is in the process of being conventionalized to mean Hispanic and Latino/a.” Martínez said.

Jimenez reflected on how other people label her and said she believed that the differences in meaning do not matter that much. She uses the labels interchangeably.

“When people refer to me, they usually say Latina, Hispanic or Mexican. They aren’t wrong since this is how I identify myself,” Jimenez said.

Due to these terms being used interchangeably in mainstream media, some people feel confused about which term is appropriate in various contexts.

“I believe that [Hispanic and Latino] are being used to mean one thing,” Lemus-Valle said. “This is also shown when there are surveys, and the only option I usually see where I feel comfortable identifying is as ‘Hispanic.’ I think other students like myself who identify as Latino end up feeling like they have to choose Hispanic because in their perspective it either means the same or almost the same as Latino.”

Lemus-Valle believes each term is different and urges people not to confuse them or use them interchangeably as it can lead to diminishing backgrounds.

“I don’t think the words Hispanic, Latino and Latinx should be used interchangeably because although they can sound similar, it combines groups of people who come from different backgrounds,” Lemus-Valle said. “I think that using these terms interchangeably can lead to commodification and even diminish backgrounds.”