With two, huge 2-0 victories against Big West rivals, the UC Santa Barbara women’s soccer team was able to skyrocket to second place in the conference. The Gauchos have now won five of their last seven matches and are peaking just in time for the Big West Tournament. 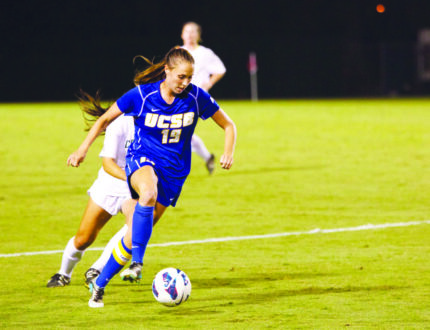 The Gauchos began the weekend on Thursday night as they took on the California State University, Northridge Matadors at Harder Stadium. In recent games, the Gauchos struggled to create offensive pressure. However, UCSB came out blazing against the Matadors. A third-minute goal from senior midfielder Lauren Moss put the Gauchos up 1-0 early. The goal came from a set-piece as a freekick from defender Emma Vanderhyden sent the ball into the penalty area, where it then bounced off freshman defender Shaye Douglas’ head to Moss’ head. Moss had the perfect angle to head the goal in and give UCSB the advantage.

Vanderhyden continued to make an impact for the Gauchos. In the 66th minute, another set-piece, this time a corner kick, rocketed off Vanderhyden’s foot right to freshman defender Alyssa O’Brien who was able to head the ball into the upper corner of the goal and into the back of the net. The 2-0 victory marked the Gaucho’s third straight game with no goals conceded.

“There’s a team spirit about us — when things go badly, there seems to be no hesitation and they get back to work collectively,” said UCSB head coach Paul Stumpf, according to ucsbgauchos.com. “I think that’s been a big part of our defensive run. Obviously, you have Evann [Smith] and our center backs Emma [Vanderhyden] and Gia [Cimring], and [outside backs] Elise [Ziem] and Alyssa [O’Brien] have been tirelessly working, but there seems to be a collective about the defensive side of the ball that’s really good.”

The Gaucho’s momentum carried over into their next match against the California State University, Bakersfield Roadrunners. UCSB’s early scoring continued in this match, as Douglas headed a ball into the net from a cross by junior forward Elise Ziem in only the 15th minute. The Gauchos doubled their lead in the second half when a goal in the 78th minute from Vanderhyden beat the Roadrunner goalkeeper Flavia Burrell. CSU Bakersfield had no luck on the offensive side of the ball, as none of their three shots tested UCSB goalkeeper Evann Smith. In contrast, the Gauchos were able to get 4 shots on goal.

The shutout extended the Gaucho’s clean sheet streak to four. The Gauchos have not given up a goal in the last 6 hours, 44 minutes, and 35 seconds of play. With the goals from Vanderhyden and Douglas, there is now a four-way tie for the team-lead in goals scored. The defeat for CSU Bakersfield keeps them in last place in the conference, where they are still looking for their first win in conference play.

Now sitting at second place in the Big West, the Gauchos will have four more opportunities to surpass Cal Poly and take the first seed into the Big West Tournament. UCSB will look to keep that goal alive on Thursday against UC San Diego at Triton Stadium.