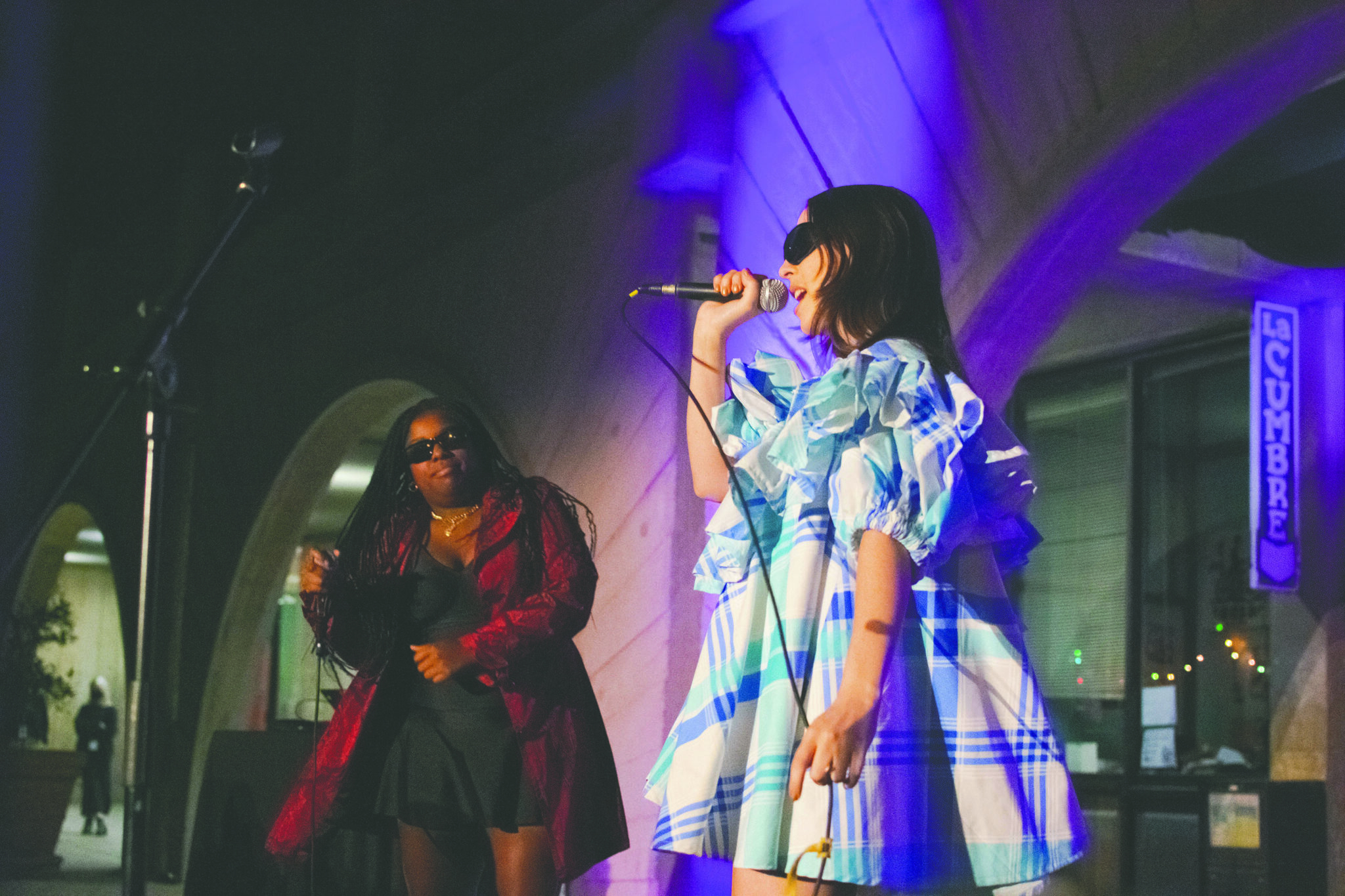 This past Saturday on Oct. 9, rising Atlanta pop-rap duo Coco & Clair Clair electrified Storke Plaza for the first in-person concert at UC Santa Barbara since before the pandemic.

Coco & Clair Clair, who met through mutual followers on Twitter and have generated buzz with their feature on the viral TikTok track “RACECAR” as well as their singles “Pretty” and “Pop Star,” stopped by UCSB while on their U.S. concert tour, and their performance drew more than a hundred students to the base of Storke Tower. Though the two friends hail from Atlanta, Georgia, they felt “close to home” in Santa Barbara, remarking that the beach reminded them of the shores of Florida.

Coco, born Taylor Nave, comes from a family of musicians, which includes her great-aunt and namesake, two-time Grammy award nominee Taylor Dayne. She remarked that it was a “natural thing” to pursue music, and she encouraged her friend Claire Toothill to form the duo Coco & Clair Clair with her. The pair first broke into their local scene in 2017 with the release of their songs “Pretty” and “Crushcrushcrush” and have continued to gain momentum in recent years with the release of their 2020 EP “Treat Like Gold” and single “Pop Star,” as well as their brand new single “TBTF” which dropped on Sept. 17.

On a small stage set up in Storke Plaza with two mic stands and a table decked out with a MacBook and a handle of liquor (what more do you need, really), Los Angeles-based DJ Kim Hu, also known as Hu Dat, opened the concert a little after 8 p.m. She spun a rousing set of diverse music ranging from viral hits such as “SANTANNY” by Bktherula to throwback 2010 hits like “Work” by Rihanna to timeless rap classics like “Itty Bitty Piggy” by Nicki Minaj. Hu Dat, recognized by her eclectic music taste and Supreme-branded hats, has also opened for superstar female artists like Doja Cat and Megan Thee Stallion.

After Hu Dat’s DJ set, Coco & Clair Clair took the stage to raucous applause from the audience gathered just below the stage, kicking things off with a short performance of their feature on “RACECAR,” Deaton Chris Anthony’s viral TikTok tune, before transitioning into their song “French Tings,” followed by “Bugs.”

The pair then moved on to some of the more popular songs in their discography, such as “Treat Like Gold,” “Crushcrushcrush” and their new single “TBTF,” which stands for “The Back, The Front,” a self-confident track with an intoxicating beat and memorable lyrics like “Chloe Sevigny, I’m the new it girl” and “Some girlies wanna flex with no spinal column.” Speaking on “TBTF,” they mentioned that the production process was spontaneous (“we were really drunk and decided to make a song”) and that the music video, basically a slideshow of selfies, was inspired by rapper Soulja Boy. In addition to the music video for “TBTF,” the music videos for each song in their set — which included mildly disturbing images of cartoon bugs — were projected onto a screen above the stage.

The duo entertained the audience not only with performances of their songs but also with humorous and well-received quips like, “So far you guys have been better than Berkeley,” “Remember COVID? We can’t take shots of vodka” and “I wanna get into another K-hole tonight,” earning applause and laughter from the crowd. Audience members also got a chance to sing into the mic, and Coco & Clair Clair frequently interacted with students in the crowd, asking questions about afterparties and requesting suggestions for songs that they should perform next.

Besides their “pure bimbo bangers,” Coco & Clair Clair also performed more emotionally rocky songs such as “Sims 2.” Before the bridge, they told the dancing crowd, “This part’s kinda emotional, you don’t have to mosh anymore.” After “Sims 2,” they performed more of their hits like “Wishy Washy,” “Pop Star” and “Pretty.”

The pair closed their performance with a cover of Minaj’s anthem “Did It On’em” and spent several minutes talking to fans before leaving the stage.

The duo cited Grimes, Drake and “everyone that would play in Urban Outfitters” as musical inspirations for their “demon glam rock” sound. They are reportedly releasing a highly anticipated full-length album by spring of 2022 and said that all the songs for the album have been written, but they still “need time to sit still and record.”

Although the pair have sold out their U.S. tour, Coco & Clair Clair will be touring Europe in May of 2022, stopping by Brussels, London, Paris and many other large cities. They also plan to “sell out stadiums” in the future and “play only massive venues so no one complains about tickets again,” so be sure not to miss out on any future concerts from Coco & Clair Clair! Their music can be streamed on Spotify, YouTube, Apple Music and everywhere else music is found.