The UC Santa Barbara Police Department released their 2021 “Annual Security & Fire Safety Report” on Sept. 29, which included crime statistics for the last three years and revealed an increase in burglaries and motor vehicle thefts in 2020.

The Annual Security & Fire Safety Report is compiled by the UC Santa Barbara Police Department (UCPD) and made available to students and employees as required by the Clery Act: a federal act requiring schools that receive Title IV funding to provide information about crimes on and around campus and safety policies.

UCPD worked with Campus Security Authorities and the Santa Barbara Sheriff’s Office to compile crime s that occured on university property, including off-campus housing and surrounding public properties. The report also states that all reported crimes are listed, regardless of whether a police investigation was conducted. 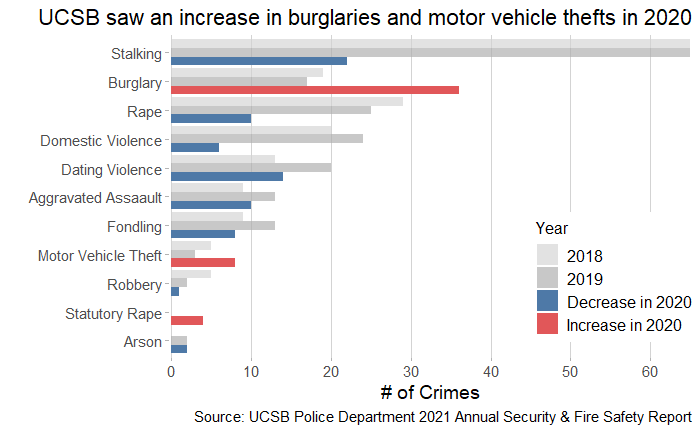 In total, there were 63 fewer criminal and VAWA offense crimes in 2020 compared to 2019. The two crimes that saw the biggest percentage decrease were domestic violence and stalking, decreasing by 75% and 66%, respectively.

Stalking has been the most reported crime in the last three years with 65 cases in both 2018 and 2019. In 2020, stalking decreased to 22 cases, making it the second-most common crime that year.

Burglary was the most common crime in 2020 with 36 cases, an increase of 18 cases from the previous year. Of the 18 additional cases, 17 occurred on campus but not in student housing.

The arrests and referrals for disciplinary action category includes reports for people affiliated with UCSB violating liquor, drug or weapons laws. In 2020, there were 392 reports of these violations, a decrease from the 936 reports in 2019 and the 1054 reports in 2018. 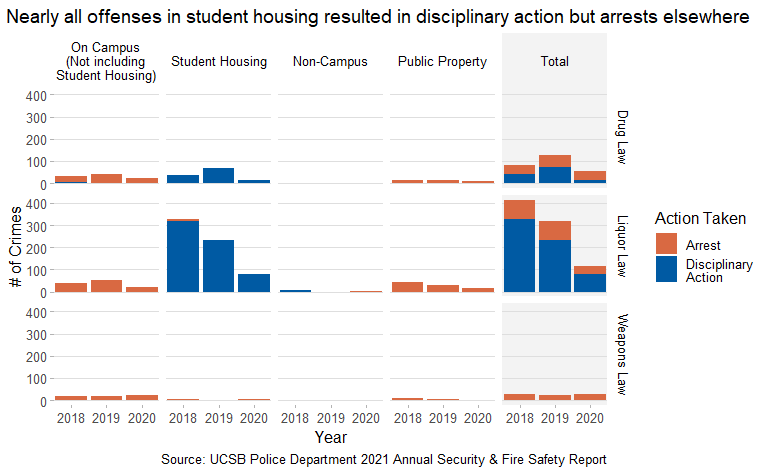 A version of this article appeared on p. 7 of the Oct. 7, 2021 print edition of the Daily Nexus