The Daily Nexus
Sports
Gauchos Mark Their 50th Win in the Classic Blue-Green Rivalry
October 4, 2021 at 1:53 pm by Jacob Davis

The Gauchos played their final non-conference match against their rivals, the Cal Poly Mustangs, on Saturday night at Harder Stadium. Both teams had to play with the pressure of 8,000 spectators that created a very lively atmosphere with their shouting and bombardment of tortillas. 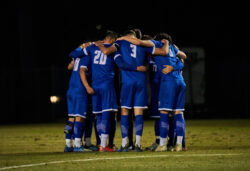 Because spectators were not required to show their Covid-19 vaccination status, all entrances to Harder Stadium were closed after the stadium capacity reached 8,000 spectators. Max capacity for Harder Stadium is 17,000.

The Gauchos came out looking to attack early as tortillas began to trickle onto the field. The team spent much of the first half on Cal Poly’s side but failed to produce any threatening attempts on goal. The Gauchos tried to move aggressively through the midfield — looking to their forwards, Salvador Aguilar and Finn Ballard McBride — on runs or one-on-one situations.

The physical strength and speed of the Mustang defense proved difficult to muscle through as the Gaucho attackers were continuously dispossessed before a shot could be made. The teams were in a deadlock for the first half as shots were kept to a minimum from both sides. UCSB only had 4 shots in the first half while Cal Poly had 3.

The match proved to be a physical one with plenty of fouls resulting in frequent pauses of play between the two rivals. The players fought hard for possession of the ball in one-on-one situations that led to the abundance of fouls. The Mustangs were especially aggressive with 13 fouls and 4 yellow cards to the Gauchos’ 10 fouls and 1 yellow card.

Senior forward Ameyawu Muntari set the tone for the Gauchos in the second half with his attempted bicycle kick that just brushed the top of the crossbar in the 47th minute. The Gauchos became more dominant with possession as they confidently moved the ball across the field and took more chances on goal.

They racked up 10 shots throughout the second half while remaining defensively sound, only allowing 2 from the Mustang offense. Their build-ups became more purposeful, and the adjustment paid off.

The deadlock was broken in the 65th minute when a drive downfield ended with a cross from sophomore midfielder Jorge Aldana that was met by McBride with a header into the corner of the goal. After the goal, the field was bombarded with even more tortillas as fans began to celebrate. McBride netted the brace five minutes later, a successful play that initially began with a skillful dispossession from junior midfielder Sam Fletcher on a Mustang fast break.

The Gauchos instantly retaliated, and McBride capitalized on a through ball from Muntari and showed great composure with a shot across the net just past the Mustang goalkeeper to put the game away.

The Gauchos will look to build on this confidence as it will be essential heading into the first conference game of the season at Cal State Fullerton. The team will travel to Fullerton on Wednesday, Sept. 29, to kick off the regular season of the Big West Conference.