The Daily Nexus
Opinion
The Deep Invasive Roots of Christian Nationalism
September 30, 2021 at 11:00 am by Megan Ramsey 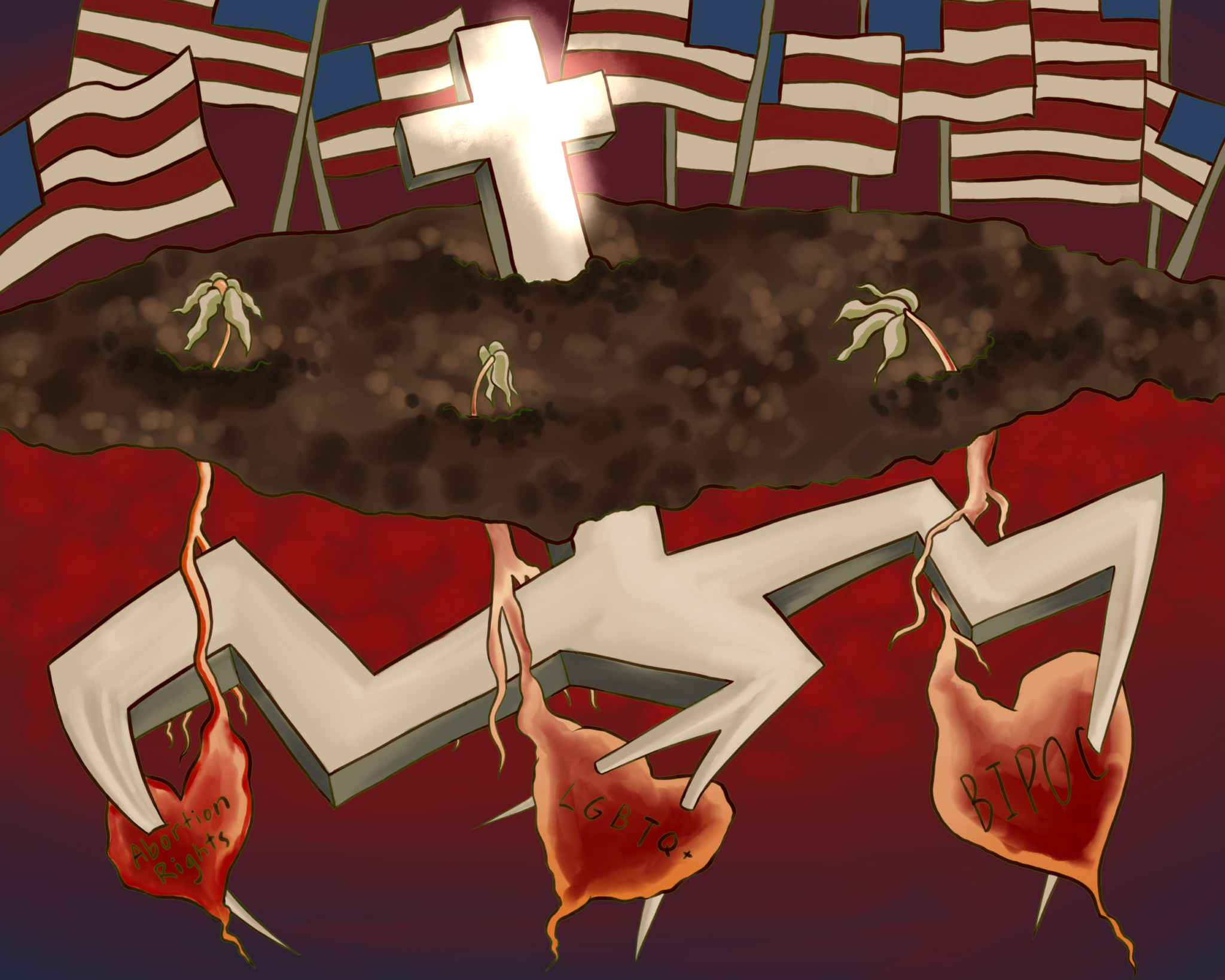 A small Christian American town should be the perfect utopia for white Christians with its superior and amazingly virtuous godly values and devotion. But let’s be real, the Bible Belt is not a desirable destination. When I see extreme evangelical Christianity in the United States, it’s not utopic. It’s reminiscent of a dystopia fit for a “Get Out,” Stepford-esque couple.

A theocracy ruled by white Christian nationalists (not to be confused with simple, God-loving Americans) would be a place where people are so overzealous that they would kill to purge society in what they consider to be in the name of God. Americans have been socialized to think that Christian nationalism is acceptable rather than a threat to society.

The overwhelming force of Christianity ingrained in Southern culture created a society of individuality, greed, racism, hatred, small-mindedness and a desire to control others’ lives. Prior to the Civil War, churches split due to their differences. Southern Christians supported slavery, which started an expansive legacy of and a deep regard for nationalism, capitalism, traditionalism and conservatism.

I have never been more glad to no longer be a Texan than with the passing of Texas’ abortion law, which gave me a glimpse of a reality in which nationalist Christianity rules. It showed me traces of “The Handmaid’s Tale,” where women are subordinate and not in control of their bodies and lives, where white supremacy thrives and where anyone who diverges from the path of Christ is punished by the people who play God.

We live in a world that Jesus would hate. Yes, teaching love and kindness and acceptance is good, but the Bible also shows us an anthropocentric view that Earth was made for the taking of humans. The Bible also introduces the idea that women lie and scheme, such as with Eve and Potiphar’s wife, the latter of whom tried to seduce Joseph; these stories give people misinterpreted grounds for the justification of homophobia, misogyny, pro-life arguments, slavery and the denial of social welfare.

The Bible has fanciful stories. It isn’t a first-hand document, but somehow, several thousand years later, it continues to act for many as a manual for life. The radical Christian visionaries who interpret it politicize it and tell Christians how to live, who to support and what is right and wrong. That must make life so easy for them because they don’t have to think or analyze life outside their bubble. Most evangelical Christians supported Donald Trump because he spoke to them and appealed to the Christian values they want incorporated into law. They are so scared that something like Black Lives Matter or the LGBTQ+ community will disrupt their sense of security that was provided by Trump and his tendency toward bigotry.

When white evangelicals come out in full force for leaders like Trump, the whole world is affected. Zealous Christian influencers have been pro-Israel, condemning Palestinians; Islamophobic and xenophobic, perpetuating hate and discrimination against people of color, immigrants and refugees; misogynistic with desires that set women’s rights back by decades; and anti-LGBTQ+, which can lead to suicide and hate crimes. The spread of these dominant ideologies hinders progress and is harmful coming from a nation and religion that should set an example and welcome everyone.

Nationalist church communities are like mini theocracies that are determined to spread their message and homogeneity of thought. In Fort Worth, Texas, there is a church called Mercy Culture, which makes its sermons a spectacle that draws in thousands. Members of the church go through an initiation process involving a series of videos created by their pastor, Landon Schott, who answers moral questions for his congregation and wants everyone to have personal, daily encounters with God to better lead their lives. Through his Instagram, he has spread anti-mask, anti-vaccination, racist and homophobic sentiments.

Many conservative American Christians like to pick and choose values that suit and benefit themselves. This puts people who differ from them at risk. Americans who want to live different lives end up being threatened by policies influenced by American Christianity.

This radical Christianity — the kind where they pray after breaking into the Capitol with rape and murder on their minds — is dangerous, especially for a nation as diverse as the United States.

For centuries, Christianity has been used to justify atrocity after atrocity —  oppression, mental domination, violence and the deaths of innocents. It has been used as a tool for exclusion, hatred and extremism. It’s absurd that Christianity is still supposed to be the answer to all our problems. The Crusades led Christians into the battlefield; the “discovery” of the Americas led to genocide because of their ideas of God and glory; Christianity and white supremacy go hand in hand and have been forever linked by Nazi Germany; Southern Christians mobilized against civil rights; and white supremacists have been championed as heroic rather than terroristic, such as with the Capitol Riot and the Charlottesville “Unite the Right” rally.

People think the Taliban and Sharia law are scary, but most fail to see how frightening Christian nationalists within the U.S. can be. Both are cases of religious extremism; it’s just that the Christian extremists are white Westerners — and white people have always wreaked havoc in the United States. The threat they pose is a nice gilded one in a land of the American Dream. At the end of the day, Republican congresspeople will cover for the maniacs who try to bring about violence and bloodshed in the country they so love.

This radical Christianity — the kind where they pray after breaking into the Capitol with rape and murder on their minds — is dangerous, especially for a nation as diverse as the United States. Christian totalitarianism should be no better than Muslim totalitarianism. In both situations, minorities become oppressed and the extreme are emboldened. The now thin separation of church and state is what seems to be keeping evangelical Christians at bay.

There are devout Christian representatives like Congressman Madison Cawthorn who want bloodshed, who want to use their authority to promote Christian values to everyone. It’s no wonder he visited Adolf Hitler’s home, glorifying a Germany that could have been a white, Christian land, free from different thoughts, free from people who don’t respect fragile white men. Racism and white Christians are connected. Hitler was and probably still is probably an inspiration to men like him.

Devout Christians give power to fragile white religious leaders who preach about salvation and claim they hear voices. These are men who pretend to be the moral judges of a corrupt society and who have zero credibility, yet they stir up Christian fervor with their theatrics and hellfire-and-brimstone preaching. Their fanatic followers don’t have the same level of autonomy and free will as someone who doesn’t belong to an organization that is so influential to their lives. But they are comforted by the lack of challenge provided by radical church communities. Christians should be scared of the destruction that these extremists could bring.

Although some religions are Janus-faced, it seems like more weight is given to the atrocities committed by Muslim extremism than Christian extremism. Christian nationalists should just mind their business and let all of us progressive heathens go to hell if God so chooses. It’s not like we should be able to drag them down with us.

Megan Ramsey believes that radical Christians can be scary.

Living a hedonistic lifestyle is more important than faith and tradition right guys? See I even made a cheap comparison to the Handmaid’s Tale! I’m so self-aware!