The Daily Nexus
Virtual Reality
The Death of Physical Media
September 30, 2021 at 9:00 am by Min Seo Riu 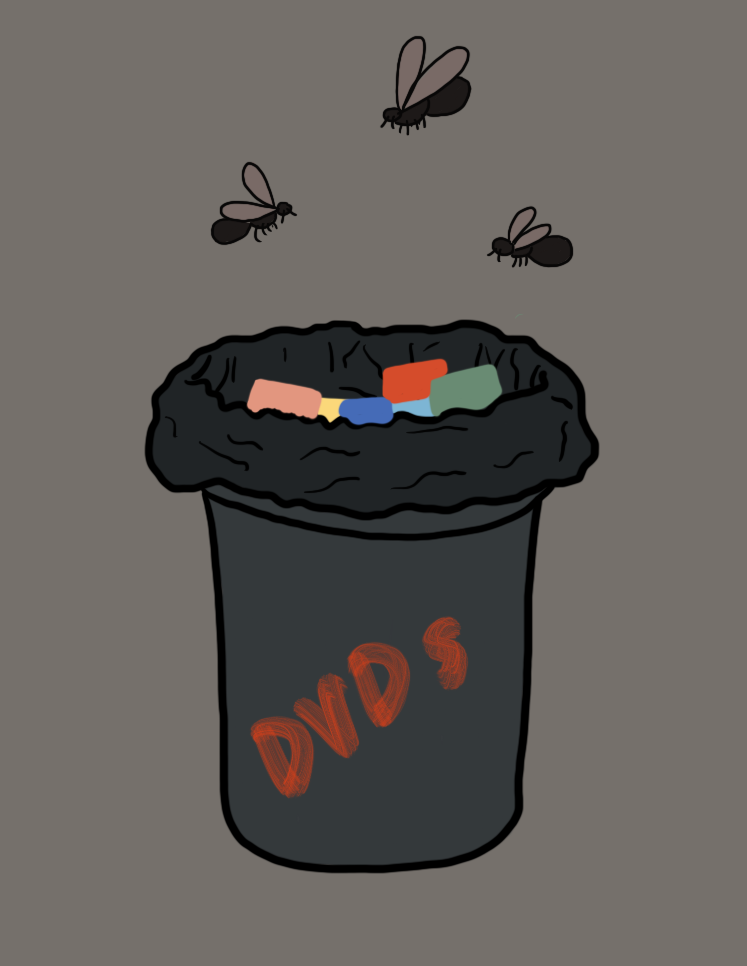 Of all the recent consequences of the Industrial Revolution to critique, the decline of physical media is a pretty nitpicky hill to die on. After all, there are loads of household items that are going to be obsolete soon, if they aren’t already. Landlines, MP3s, paper maps — basically anything your smartphone can do, the predecessor is practically already defunct. This, for some bizarre reason, even includes the ignition key in your car, which is so ridiculous to me that I might have to drive my 20

But as upset as I am about losing my ignition key (there is absolutely nothing satisfying about pushing a button to start your car), it doesn’t hold a candle to the grief I feel over the loss of physical media.

This is always on my mind. It lives in the crevices of my gray matter, next to the November-5th-American-Election-Putin-Resignation-Supernatural-Finale debacle and the megalodon. If I want to ruin my day, I’ll remind myself that DVDs are basically halfway obsolete already and that, by the turn of the century, they’ll be but a memory to us.

Although it’s hard to accurately predict the fate of outdated technology in the long run — especially with something as broad as the umbrella term “physical media,” which includes CDs, DVDs, VHS tapes, etc. — it’s relatively easy to guess once you factor in nostalgia and the latest fixation on “vintage” items. Vinyl records, for example, have resurfaced into the mainstream due to the nostalgia for ’70s music and the aesthetic appeal. On the other hand, VHS tapes, evidently, do not hold the same nostalgic, aesthetic or operational appeal as records and thus have become obsolete. Somewhere precariously in between these two are cassette tapes, which are just trendy enough to be stocked at Urban Outfitters but not operational enough to be as widespread as record players.

Within this spectrum, DVDs (and CDs — but for the sake of clarity, I’ll be focusing on the former) are definitely leaning toward the “obsolete,” joining their VHS cousins on the journey to being completely forgotten within the decade, despite still having an audience to supply to.

As someone who has subscriptions to more than one streaming service, I know firsthand how convenient it is to have an entire library of movies in the comfort of your home. And if it were still 2016, I would agree that having Netflix is far cheaper than going to theaters, renting DVDs or driving to the library.

But as streaming sites begin to depend more and more on the exclusivity of their content, it’s becoming increasingly clear that it’s not as convenient as it’s been marketed out to be.

If I want to ruin my day, I’ll remind myself that DVDs are basically halfway obsolete already and that, by the turn of the century, they’ll be but a memory to us.

Not only is it inconvenient to have to subscribe to three different streaming services just to be able to watch “Game of Thrones,” “Portrait of a Lady on Fire” and “The Twilight Saga” at the same time, it also — to me, at least — highlights how reliant I am on yearly contracts and how much easier it would be just to get the Twilight DVDs from a thrift store for two dollars each and cut out Netflix from the equation entirely.

The beauty of physical media is that it belongs to you. As someone who admittedly sees the flaws in materialism, I find it unsettling that someday (though hopefully soon), Jeff Bezos’ mighty empire will eventually collapse and all the movies that I’ve purchased on Amazon Prime Video will blink out of existence because they never really belonged to me. They belong to Amazon, which itself could become obsolete at any moment, following in the footsteps of their predecessor, Blockbuster.

DVDs, on the other hand, are much simpler. You buy them, you watch them and then you store them on a little shelf until in a couple months, you decide to revisit “Star Trek IV: The Voyage Home.” The collapse of a conglomerate has no impact on whether or not I can watch Spock mind-meld with a blue whale tonight. Or, in less dramatic terms, it won’t matter to me whether Hulu takes my favorite “Star Trek” movie off its catalogue next week because its DVD is tucked away safely in my bookshelf.

However, I understand that the prices of new DVDs may seem steep compared to a Netflix or Hulu subscription, but there are plenty of ways to purchase used DVDs for relatively low prices: A local thrift store, a second-hand library store and online websites such as thriftbooks are all great examples. The subscription fee for both Netflix and Hulu ($17.99 and $11.99, respectively) for a single month could hypothetically buy anywhere from seven to 30 used DVDs from any of the previously mentioned stores.

So instead of spending 30 to 40 minutes searching through a superfluous catalogue of mediocre, nearly unwatchable movies just to rewatch “Scott Pilgrim vs. the World” before it gets taken off Netflix, I implore you to give DVDs another chance. Even if it’s just to keep a small personal collection of your favorite movies, the difference may be big enough to ward off the dark future of a DVD-less world.

Min Seo Riu grieves the loss of DVD’s around the world.

Min Seo Riu
Min Seo Riu is an Opinion staff writer and English major. She is a Danny DeVito enthusiast and a lover of Star Wars.
2 Comments
Inline Feedbacks
View all comments

This is a great article, and I think a lot of people don’t even realize that they don’t actually own the movies they bought from amazon prime. Death to subscription-based media companies!

Well, I’ve realized for myself, that with multiple streaming services as well as social media sites like Youtube and Twitch, I rarely if ever go to my Blu Ray collection and never to my DVD collection to watch anything though I’ve gathered quite a large library. It’s the laziness of having streaming at hand and not wanting to load in/swap out discs if I can find it online. So streaming has put my physical media into a coma on life support, but fractured streaming homes for content keeps me from pulling the plug (on physical media). I may pull the… Read more »