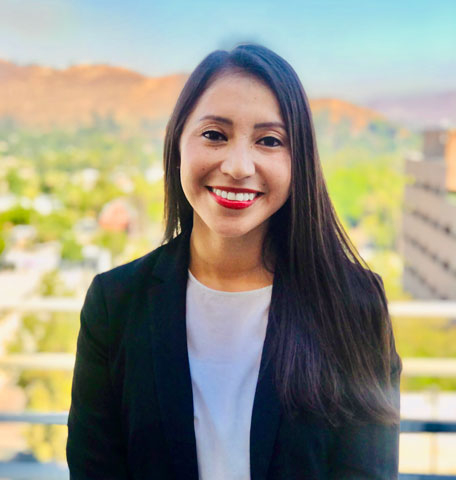 UCSB alumna and second-year UC Berkeley law student Marlenee Blas Pedral was elected to be the 2022-23 student regent in July 2021.

As student-regent designate, Blas Pedral will be involved in meeting proceedings and undergoing training for the upcoming 2021-22 academic year but without voting rights on the board. She is set to become a student regent with voting rights for the 2022-23 academic year.

Blas Pedral said the process — which included over 100 applications being reviewed by a steering committee, then narrowed down to three candidates who were interviewed and voted on by that year’s Board of Regents — was “less intimidating” and faster due to it being over Zoom.

Blas Pedral said her reaction to the appointment was twofold: “I think one, I’m absolutely humbled by it. It’s a great honor. The second part of it is learning how to [lead in the position] confidently.”

Blas Pedral said she was motivated to apply for the student regent position because of her extensive experience in advocating for students in the UC system since her time at UCSB.

“I’ve been a student leader and a student advocate … that’s been the common thread throughout my work as an undergrad, as a staff member and now as a law student,” Blas Pedral said.

Blas Pedral — currently a second-year law student at UC Berkeley — did her undergraduate education at UCSB as a first-generation student and global studies major, where she co-founded an Associated Students political party called the Democratic Process Party.

The political party, by Blas Pedral’s account, was heavily made up of first-generation college students and students of color and served as a way for Blas Pedral to gain experience in elections as someone who couldn’t vote in U.S. elections.

Blas Pedral said the experience of forming the party gave her valuable community-building and communication skills and motivated her to continue pursuing higher education at the University of Vermont.

Blas Pedral returned to the UC System following her master’s education but this time as a career counselor at UC Riverside. Along with aiding students through her job, Blas Pedral co-founded the Butterfly Project in 2017, which provides grants, professional development and internships for undocumented students through an eight-week program.

“You have a little under 300,000 students in the UC system and UC Merced and UC Riverside have a larger population of undocumented students … You can graduate students, but what are they going to do after they graduate was a big question that I had,” Blas Pedral said.

Now, Blas Pedral is a second-year law student at UC Berkeley and noted that balancing her academic responsibilities with her regent ones has been a challenge. However, she added that the community around her eased the challenge by supporting Blas Pedral in fulfilling her responsibilities.

“Everybody being so supportive is making this experience a little bit more manageable. As you know, law school books are heavy, so I’m running from class to a Zoom meeting, and people are like, ‘Hey, do you want me to watch your stuff while you go do your Zoom regent meeting?’” Blas Pedral said. “I think [balancing regent responsibilities with law school responsibilities] is going to be a community effort is what I tell people.”

Current student regent, Alexis Atsilvsgi Zaragoza, is one of the many supportive members in Blas Pedral’s community who Blas Pedral has been working closely with to train for the student regent position.

“I think our energy, our mission, are on the same path … I’m trying to be supportive of things that she hopes to see in the short term during her time and also trying to figure out where we overlap [with] issues that we both are passionate about,” Blas Pedral said.

Two issues in particular that Blas Pedral wants to address during her time are housing and COVID-19 health as campuses reopen.

“I think those are the two things that are front and center because they’re happening as we speak,” Blas Pedral said.

“Housing was an issue when I was a student many years ago, and the issue only became exacerbated by our enrollment rates with low availability on campus,” she continued. “[The second issue is] monitoring and watching the health of our UC campuses … I want to have more preventative and more proactive measures we can do versus being so reactionary and having to shut down from one day to the next.”

Though Blas Pedral does not currently having voting rights as student regent-designate, she will be participating in regents proceedings and voicing her concerns throughout the upcoming academic year.

“I’m looking forward to meeting more of the board members. I haven’t had the opportunity to meet everybody one on one yet,” Blas Pedral said. “I’m curious to hear what their interests are, where their passions are and where we can collaborate better.”