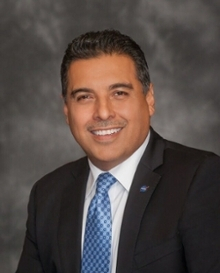 UCSB alumnus, astronaut and engineer Jose Hernández was appointed as a UC Regent in August 2021.

Hernández applied to be a UC Regent three years ago after finishing a nine-year term as a Regent for University of the Pacific, where he attended school as an undergraduate.

Following his term, he wanted to represent his former graduate school, UC Santa Barbara. When the governor’s office called him to notify him that he had been appointed, Hernández was ecstatic for the chance to represent both of his alma maters.

“They were just recruiting me to see if I was interested and I said, ‘Yes, I’ve been wanting to do this for four years,’” Hernández said.

The regent position consists of meeting with the 25 other members of the UC Board of Regents six times a year to establish policies for the UC school system.

Hernández grew up as a migrant farm worker. His family used to spend nine months of the year in California, following the harvest of crops, until they travelled back to his parents’ hometown in the state of Michoacán, Mexico. They repeated this cycle annually until Hernández’s second grade teacher convinced his parents to stay in Stockton.

Hernández learned English when he was 12 years old, then quickly veered into the S.T.E.M. field.

“I struggled to learn the English language … My favorite subject was math because two plus three is five in any language,” he said. “I naturally migrated to the S.T.E.M. field, and that’s why I became an engineer.”

Hernández attended UC Santa Barbara for a masters in electrical engineering and described his fondness for the university and Isla Vista.

“I just love the fact that you got the nice breeze of marine air and then you got I.V. … the community next door, and it just felt like you were very comfortable at home there,” he said.

At UCSB, Hernández was set on his goals of getting his masters and beginning his professional career.

After graduating, he began working at Lawrence Livermore National Laboratory, a part of the UC system dedicated to nuclear defence projects.

Hernández worked on several projects in the nuclear defense arena at the laboratory. One project involved the Strategic Defense Initiative — which focused on creating a defense shield in case of an attack from the Soviet Union during the Cold War. They were developing a nuclear-pumped X-ray laser that was going to be “deployed up in space.”

The project was cancelled after the Soviet Union broke apart, but as Hernández says, “change creates opportunities.”

“I’m convinced that this device … has saved tens of thousands, if not hundreds of thousands of lives, because our images are much more superior, they have more information content and everybody knows that early detection saves lives.”

After working in the lab, Hernández went on to pursue a dream that began when he was only a child.

“I knew I wanted to be an astronaut since I was 10 years old. It was 1972, I watched Gene Cernan, the very last man who has ever gone to the moon. I watched him on TV live walking on the moon, Apollo 17,” Hernández said. “And I was just mesmerised when I saw him, you know, on our old black and white vacuum tube technology TV with rabbit ear antennas … I was hooked. I looked at that astronaut on that black and white fuzzy TV, and I said, that’s what I want to do. I want to be an astronaut.”

Hernández was rejected by NASA 11 times before he was finally accepted as one of the 12 to 15 astronauts chosen from a pool of 100 semi-finalists. When Hernández first applied, he was one of about 8,000 applicants.

He underwent written tests, psychological analyses, aptitude testing, physical tests and many other training exercises. Hernández never feared the work of an astronaut.

“You program [fear] out of you, it’s not in your DNA. You train so much, you don’t have time to worry or be afraid.” he said.

Hernández credits his father for validating his dream to become an astronaut and fueling his drive, giving him a “five-step recipe” to achieve his goals that consisted of defining his goal in life, recognizing how far he was from that goal, drawing himself a roadmap, preparing himself by going to college and relentless effort.

As a UC Regent, Hernández wants to make education affordable and accessible since families who want to send their children to college often face large expenses.

“I want to make sure that the education is affordable … I just came out of being a regent at a private university, and it’s just expensive. Even the UC systems, even the Cal State systems … once you enroll, room and board … books, fees and parking, it becomes a significant cost to the families that send their kids to school,” Hernández said.

He also wants to ensure that students are in a safe environment, especially in the face of the COVID-19 pandemic, and acknowledged the importance of getting kids back into their classrooms, while still behaving in a responsible way so that schools can keep their campuses open.

“There’s only so much virtual teaching can achieve. Yeah you got to get into those labs, you got to get your hands dirty, you got to, as an engineer, you got to put those circuits together, see the lights turn on and see it work as opposed to just doing electronic simulations,” Hernández said.

Hernández prioritizes the safety of students and their ability to pursue an education and encourages students to pursue their dreams.

“Dream big, but be prepared to put the work in. And if you do it, follow my pops’ recipe, you know, the sky’s not the limit anymore. The stars are. I’m living proof.”