Friday’s match was a disappointing one, as the Gauchos lost on a set piece in double overtime. This is their fourth game of the season that was decided within the second half of extra time, in which they have a 1-2-1 record. The team had their opportunities to convert as they racked up 13 shots — 6 of them on goal — but nothing came to fruition. 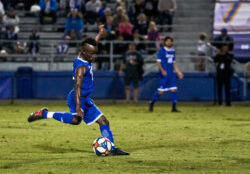 This game showed the inconsistencies within the Gauchos’ attacking ability as a whole. This certainly was not the team that scored seven goals against University of San Diego. Senior defender William Gillingham had the most shots on the team with three, and senior forward Ameyawu Muntari was the only other player with more than one shot.

Aside from the lack of finishing, the Gauchos looked strong in their time with possession and defending. The midfield controlled much of the pace of the game utilizing quick touches and passing to weave through the tight Loyola Marymot Unniveristy defense. The ball stayed on LMU’s half for most of the first half, thanks to the dominance of the midfield and back line that forced LMU to resort to long balls that were comfortably read and handled by Henry Davies, Carson Vom Steeg and Gillingham.

Much of their buildup started from the back line throughout the game, but the creativity and control began to falter as the game progressed, especially in the second half. Sloppy passes and fatigue seemed to overcome the Gauchos resulting in them being outshot by the Lions 7-4 in the half.

Much of overtime play was characterized by back-and-forth loss of possession between both teams. Junior midf ielder Sam Fletcher made the lone attempt in the first half of overtime, but it was a meager attempt. The winning goal was scored off a corner kick with a header to the upper right corner of the goal, which just passed the outstretched arm of sophomore keeper Leroy Zeller.

The Gauchos will travel to Oregon State to take on the Beavers Tuesday, Sept. 21 at 7 p.m. PDT. There, they will look to improve their finishing in the final third and tip their record in favor of wins.