On the corner of Embarcadero del Norte and Cervantes Road, a new fridge is open for all community members to use as a convenient source of food. The goal is for Isla Vistans to be able to both add and take food from the fridge, a model similar to book “lending libraries” that are gaining popularity across the country. 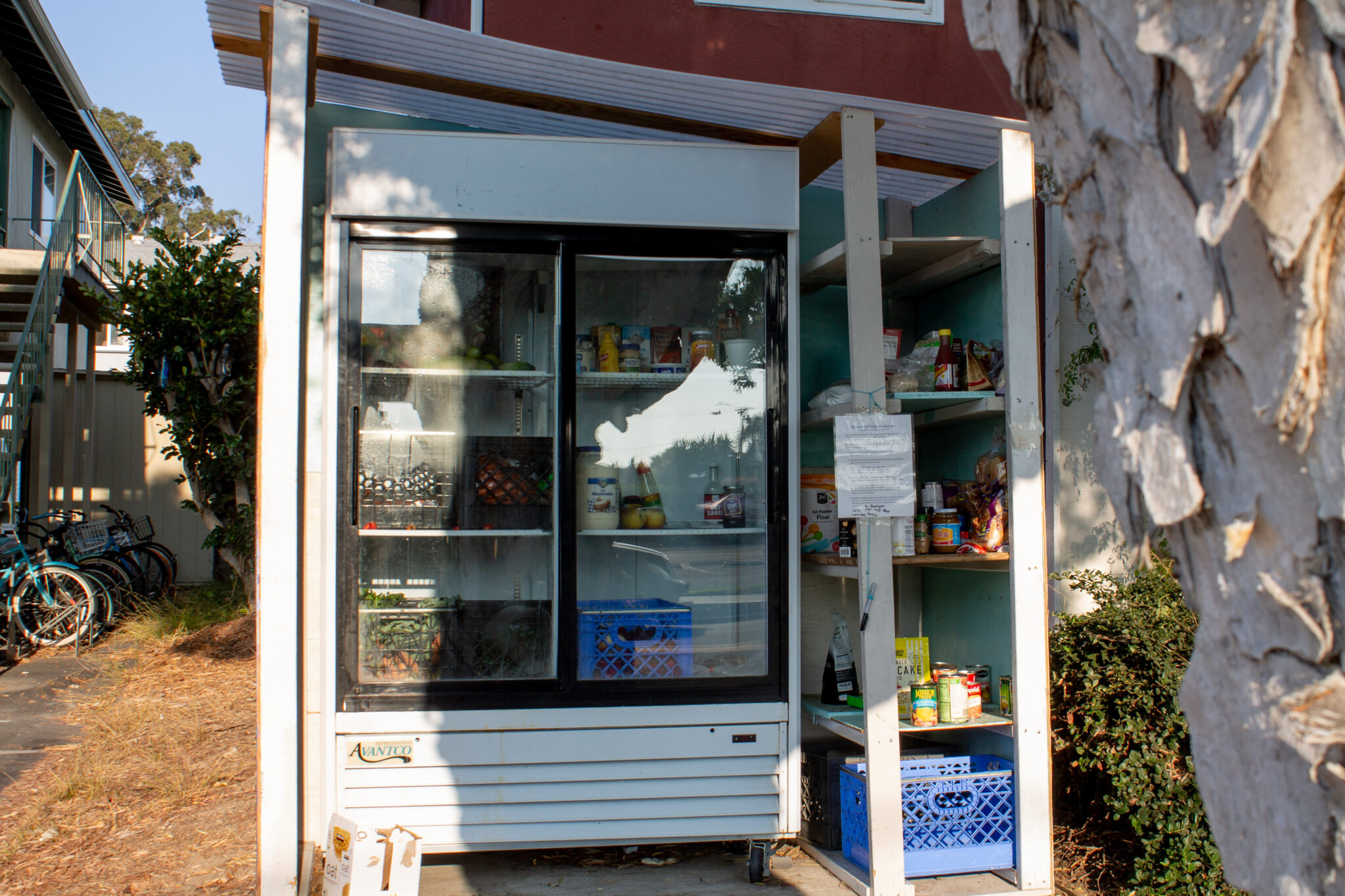 Food Not. Bombs brought forth a community fridge in I.V. for everyone to use. Kaiyi Yang / Daily Nexus

The community fridge was founded by an Isla Vista resident and Food Not Bombs organizer, who wished to remain anonymous for privacy reasons. Food Not Bombs is a community-led effort to help end food insecurity, providing free vegetarian and vegan meals throughout the area.

With the help of volunteers from Food Not Bombs, Eco Vista and other community members, construction of the fridge began this past spring and concluded at the beginning of this summer. According to the founder, people are free to drop off and pick up food from the fridge as needed.

The whole process of constructing the fridge — including moving it from lot to lot, building the shelter and painting a mural around it — was carried out by around 20 volunteers. The fridge is also checked almost daily by volunteers who clean and organize donations.

First-year environmental studies major and volunteer for the project, Catrina Sada, believes the fridge is a step forward in “community helping community” and stressed that it is open to people of all backgrounds.

“A lot of people have this belief that if you’re getting something for free that you’re disadvantaged in some way,” Sada said. “But with the community fridge, it doesn’t matter your background, income status, job or really anything about you. All that matters is if you want or need this thing, you can take it.”

Sada emphasized the importance of providing mutual aid and viewed the fridge as an example of such.

“When you’re giving someone something for free, it shouldn’t be an act of charity. When you buy your friend a drink, that’s not because you feel sorry for them. It’s not out of pity; it’s because they’re your friend,” Sada said. “If we implement that on a community-wide level — if the entire community of Isla Vista was like that — then everyone would help everyone out.”

The fridge has received frequent donations from locals over the last month, as well as drop offs from Food Not Bombs and Santa Barbara’s Local Harvest Delivery. Those wanting to participate in or keep up with the fridge can find more information from its Instagram page, @ivcommunityfridge.

“I’ve talked to people who don’t have access to refrigerators that are now able to regularly get fresh produce because of the fridge,” Sada said. “My friends love baguettes from the fridge, and I’ve talked to others that are thrilled to find snacks in it.”

In the future, Sada hopes to see the project expand throughout I.V. by adding a freezer to the current site, building more fridges, starting community pantries for dry goods and more.

“People come and go in Isla Vista, and even I might move out someday, but I hope [the fridge] stays forever,” the founder said.

No identification for “the founder”–what happens if someone gets sick from food in the “community fridge”?–that founder will be sued. Not sure who owns that property but they will too. Substitute “community fridge” for trampoline surrounded with broken glass and no safety net.