The Daily Nexus
Listicles
Artsweek on Spotify: Sounds of Summer Past
August 31, 2021 at 2:46 pm by Artsweek Staff 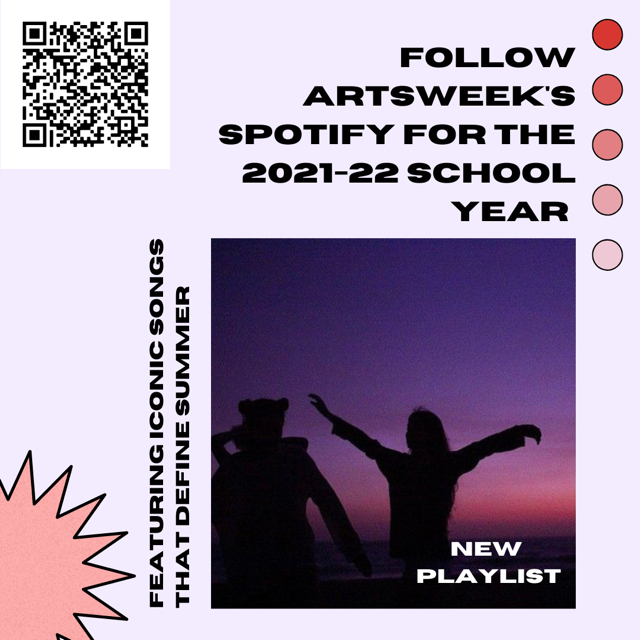 Ah, the late 2010’s … A time where our greatest concerns were about who was asking who to homecoming, taking the SATs and making sure our outfits followed the ridiculous dress code. If you frequent Twitter, it’s likely that you’ve seen tweets recalling the glory of summer ‘16. No doubt 2016’s iconic songs helped cement it as an era that would go down in history. So, with school almost in session, we figured now was as good a time as any to reintroduce the bops that you may have forgotten about from the summers of 2016-2018. Buckle up and get ready to be transported to your high school years. ‘Cause hey, a little nostalgia never hurt anyone.

“One Dance” by Drake ft. WizKid and Kyla

2016 was undoubtedly a banner year for the global hip-hop phenomenon, and with his fourth studio album “Views” pushing over 3 billion streams and receiving eight Grammy nods, it’s safe to say that the summer of 2016 was the summer of Drake. “One Dance,” the Canadian rapper’s dancehall collaboration with Afro-pop star WizKid and British songstress Kyla, was hard to escape and even harder to forget as the buoyant club track could be heard blaring from radio stations, poolside speakers and house parties alike. The track is signature Drizzy, with honeyed, borderline-corny lyrics about a nightclub romance (“You know you gotta stick by me / Soon as you see the text, reply me / I don’t wanna spend time fighting”), but as far as feel-good dance anthems go, you’d be hard pressed to find a song that better captured the warm euphoric feeling that defined the nights of summer ‘16.

“No Problem” by Chance the Rapper ft. 2 Chainz and Lil Wayne

With Chance the Rapper’s exhilaratingly explosive “fuck you” to record labels setting the bar so high, it only makes sense that shit hasn’t been the same since summer ‘16. The Chicago-bred artist has established himself as one of the most creative and avant-garde mainstream rappers out there, and on “No Problem,” the second single from his acclaimed third mixtape “Coloring Book,” the joie de vivre is irresistible. Featuring powerhouse verses from contemporaries 2 Chainz and Lil Wayne, this certified summer slap will instantly transport you and your crew back to the better days of summers’ past.

By 2017, Calvin Harris had already been well established as the king of pop electronica with hits such as “This Is What You Came For” (ft. Rihanna) or “I Need Your Love” (ft. Ellie Goulding). The release of “Slide” served to further demonstrate this fact. The breezy beats introduced within this unexpected collaboration are fun and carefree — the perfect tune to bob your head to. Ocean’s vocals added extra dimension to the eccentric sounds of “Slide,” while Migos’s verse spiced up the track by breaking up Ocean’s parts of the song. With all its great musical talents, it’s no wonder that “Slide” will forever remain a classic within the summer music scene.

“The Weekend” by SZA

“The Weekend,” featured in SZA’s debut album, “Ctrl,” is an unforgettable song, and arguably what helped launch her into the mainstream. The song starts with an electrifying synth line that draws the listener in. Listeners are then met with SZA’s gentle yet soulful vocals, revealing that she is “timesharing a man” along with two other women. The dreamy beats of “The Weekend” gives her song a unique sound that sets SZA apart from her female contemporaries. Despite the rather unfortunate subject matter of “The Weekend,” SZA is able to create a vibey song that can be enjoyed for many years to come.

A truly inescapable song of summer 2018 was “God’s Plan.” The quotable “She say, ‘Do you love me? / I tell her, ‘Only partly / I only love my bed and my mama, I’m sorry’” lyrics were in every Instagram caption. One of Drake’s most popular songs, the energetic beat and a catchy sung-rapped hook build the track about Drake’s perseverance in the industry. The music video for the track bolstered the song’s popularity as it features Drake giving away almost 1 million dollars to families, schools, charities and more. His public, seemingly self-congratulatory, philanthropy came under some scrutiny, but many may be more aware of the meme that derived from it. *“God’s Plan” starts playing*.

“Feels Like Summer” leans into the funk, groovy aspects of Childish Gambino’s discography. The track truly encapsulates summer with Gambino’s smooth, echoing vocals over lush instrumentals. It feels warm, but the lyrics emphasize the concern of the increasing heat, referencing climate change: “Every day gets hotter than the one before / Running out of water, it’s about to go down.” However, the accompanying music video became the main focus as it was dissected for its celebrity features, clouding the meaning — perhaps intentionally to highlight the common ignorance of the ever pertinent issue. Gambino reflects the sentiment, singing “I’m hopin’ that this world will change / But it just seems the same.”