The Daily Nexus
Science & Tech
With California Heating Up, UCSB Researchers Study the Future of the State’s Fires
August 26, 2021 at 8:00 am by Sean Crommelin

Large and severe forest fires burn soil, kill off swathes of forest and leave a moonscape in their wake.

With time, things return. Flowers bloom beneath canopies of charred snags and shrubs take root, basking in the newfound abundance of sunlight. Then, with luck and even more time, saplings take root and begin their quest to rehabilitate the forest. 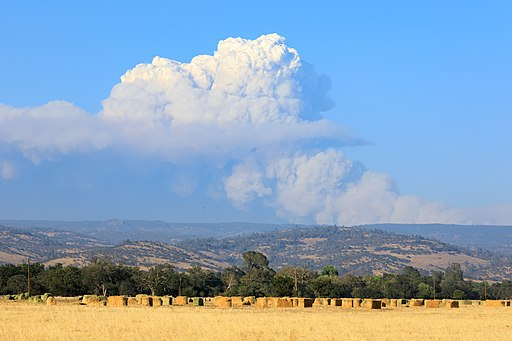 A pyrocumulus cloud generated by the Dixie Fire in the Northern Sierra. Courtesy of Wikimedia Commons

But this takes decades, even generations. In a California facing a hotter, drier future, the road to recovery — or even the road to understanding what comes next at all — is fraught with uncertainty.

“Climate doesn’t doesn’t just affect fire, right? It also affects the ability of vegetation to recover from a fire. Climate affects how much vegetation you will have on the landscape and how productive forests are. And, of course, it also affects the water cycle,” said Naomi Tague, a researcher with the UC Santa Barbara Bren School of Environmental Science and Management.

Tague and Janet Choate, a research assistant in the Bren School at UCSB, in collaboration with other researchers from the Sierra Nevada Aquatic Research Laboratory and the University of Washington, are studying and fine-tuning models to better understand how the forests of the Sierra Nevada will respond as a changing climate shrinks the intervals at which wildfires strike.

Take the Dixie Fire, for instance. The largest fire in the United States so far this year, the behemoth blaze has torn through over 700,000 acres of land across the northern Sierra Nevada, some of which hadn’t burned in over 40 years.

However, vast swathes affected by the Dixie Fire had already burned in the 21st century, including some 75,000 acres as recently as 2012 in the Chips Fire.

“One of the core things that I do as a scientist is develop essentially simulation models that allow us to integrate both data and the conceptual understanding of how water and vegetation and climate interact,” Tague said.

Tague’s prior work along this vein examined how changing snowpack will affect streamflow and groundwater recharge, how drought will impact forest mortality, and other simulations beyond the scope of the Sierra Nevada, such as how greening infrastructure impacts waterflow or carbon sequestration.

In their most recent research, Tague and her collaborators focused on the Big Creek watershed in the southern Sierra Nevada, a region covering the rain-snow transition, which is particularly sensitive to climate change. They ran 60-year-long simulations detailing the impact of increasingly frequent drought and heat.

Using the Regional Hydro-Ecological Simulation System, or RHESSys, the researchers cut up the land into subdivisions containing overstory and understory vegetation, litter and soil. Then, on these individual parcels, they calculated vegetation growth, plant turnover and decomposition, and estimates of carbon and evapotranspiration.

In conjunction with this, the researchers used WMFire to model fire initiation and spread — reproducing spatial patterns of spread observed in fires — as well as fire regimes, which are the patterns at which fires occur on a landscape over time.

They found that with progressively hotter and drier conditions, a pulse of repeated large and severe fires afflicted the land at first. However, after the first 10 years of the simulation, this trend reversed, and fires gradually decreased in size and frequency.

“Initially you’re going to get a bunch of big fires, but eventually those climate conditions will also retard plant growth … ultimately if things really do get hotter and drier, then you get into a place where you shift past this threshold and instead of being climate-limited, fires become fuel-limited,” Tague said.

According to Tague, the point at which this threshold is crossed depends on elevation and precipitation, with locations at lower elevations likely crossing it sooner than those at higher elevations. However, at least in their study site Big Creek, Tague was surprised by the speed with which the fire landscape transformed

It also speaks to the looming threat of widespread and severe fires in the near future, according to Tague

“If everything kind of keeps on the same trajectory, eventually you’re going to see this transition to more fuel-limited areas. However, there’s a decade or so where you have a lot of high fire severity,” Tague said.

“I just think it’s important to be aware of that and realize that we’re going to be managing high fire severity for the next decade in lots of parts of California. Forest management can help, but it’s not going to get us out of that completely. Fire preparedness is going to be crucial.”