The Daily Nexus
News
Local Black Artist Paints “This Is More Than A Moment, This Is A Movement” at Little Acorn Park
July 10, 2021 at 5:30 pm by Atmika Iyer 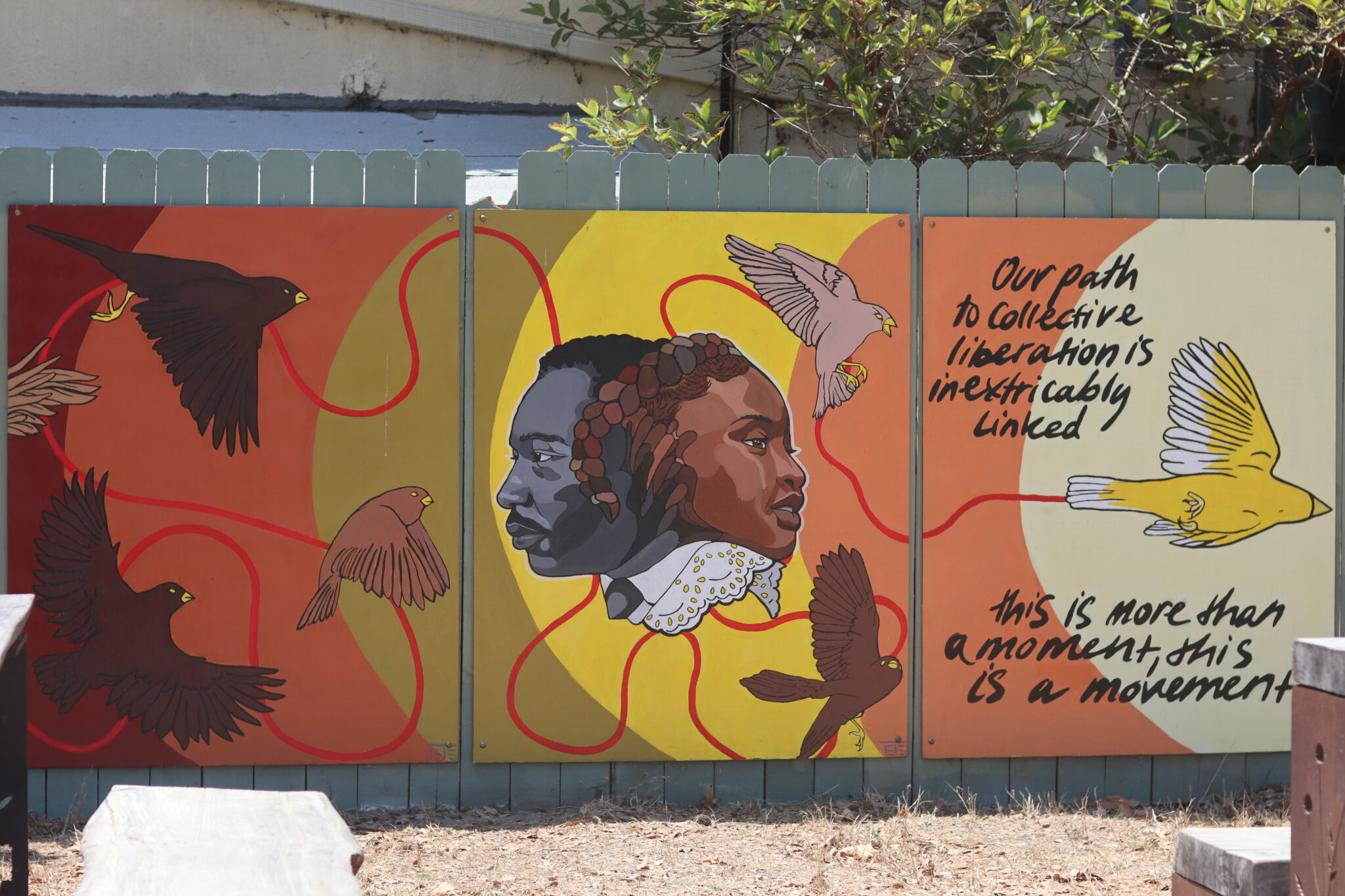 Glover tried to incorporate symbolism throughout the piece that expressed the idea of Black Lives Matter being an ongoing movement, they said. Pia Ramos / Daily Nexus

The mural, which was commissioned by the Isla Vista Recreation and Parks District and UC Santa Barbara’s Associated Students, shows the two surrounded by a red ribbon and flying yellow canaries.

“Making this mural happen was a very long and difficult process. When Mikio, Luis and I started out we would meet once a week just to come up with broad ideas of where we would want the project to go,” Salari said in a statement to the Nexus.

With the help of  the Santa Barbara Arts Fund’s Jamie Dufek in locating a local Black artist, Salari, Sacramento and Valerio turned to Glover, requesting they paint a mural in I.V. that communicated Black Lives Matter as a movement, not a moment. Although Glover initially rejected the commision, having just finished a mural and needing to take a break, IVRPD contacted them again around a year later.

“A year later they reached out to me, and it had been after all the protests just a year of a lot of reflection and sitting. The truth is, I really didn’t have the capacity back then,” Glover said. “So, they reached out again and I was like, ‘Yes, I have time, I have energy for this and I have a fresh perspective that I’d like to take with this project.’ I was excited.”

Glover tried to incorporate symbolism throughout the piece that expressed the idea of Black Lives Matter being an ongoing movement, they said. The depiction of Martin Luther King Jr. and Gianna Floyd together was a way to symbolize the length of the movement, with Martin Luther King Jr. representing the past and Gianna Floyd representing the present. The decision to surround the pair with a red ribbon and yellow canaries was imagery Glover was toying with for a long time, they added.

“I had a totally separate idea of doing canaries that are flying and connected by a red thread. That’s been something that I’ve been imagining for a long time, long before I heard about this project, that to me is representative of the path to liberation and freedom,” Glover said.

“I think about the canary in the coal mine and how they were used. They’re these beautiful songbirds, these joyous light birds that were put into cages and used to detect essentially like toxins in the air, poisons in the air and were sacrificed.”

Glover said they see canaries as “reflective of Black and brown people in the United States.”

“To have imagery of canaries that are free, and that are all these different colors of skin tones from white to black to everything in between, [they are] representing all of us, and [they are] connected by this thread of life,” Glover said.

Being able to paint the mural in a public space after isolating during the pandemic in addition to depicting hope and collective participation was an important aspect of the process, they said.

“It felt really powerful for me to be in the position of creating a piece like this in a public space. I [painted] it in the park where it was mounted, and [it was] just the culmination of a really intense year for all of us — for the whole world, but for me, it was an intense year,” Glover said.

“So to be physically out in public — especially after a year of being hibernating and not being able to be around anybody — for the thing that’s birthed out of that to be the symbol of liberation and of this path that that we’ve all been on and are going to continue to be on, the feeling around this mural feels like one of cop[ing]. And also holding of each other and our collective participation in moving forward.”

As an artist, Glover believes that symbolism can speak to the subconscious and hopes that people who view their mural are reminded of their impact on collective activism.

For generations to come, Isla Vistans and visitors of Little Acorn Park will be able to see the painted culmination of Sacramento, Salari, Valerio, Dufek and Glover’s work: “This is more than a moment, this is a movement,” the mural reads.