UC Santa Barbara professors, lecturers and faculty within the LGBTQ+ community have a wide range of lived experiences. 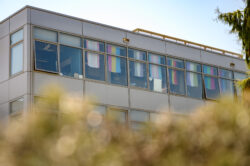 The Nexus spoke with employees on UCSB’s Out List about their experience within the field of higher education as members of the LGBTQ+ community — along with other aspects of their identities. Some of these experiences occurred at UCSB while others were in other universities and colleges.

Graduate Dean and Feminist Studies Professor Leila Rupp shared that one of her primary struggles was being taken seriously for pursuing queer studies while teaching in Ohio.

“People in the history department would think, when I started doing really queer history, they would think, ‘Well, that’s silly’ or they would wonder, ‘Did [her] classes go well?’ because I was teaching from a lesbian perspective,” Rupp said.

For a long time, Rupp said that pursuing or taking interest in queer movements or history made getting employment fairly difficult.

“It’s not always been easy to get in a position in academia. There was a study done a while ago, among people who did queer history, and the first cohorts of scholars in that field — none of them had gotten academic jobs in the United States. There were a couple in Canada, one in England. Clearly it’s the kind of work that they did, [it] wasn’t even about their identity but the kind of work that they did,” Rupp said.

“That was one of the battles that I fought [at] time[s], it’s about both women’s history and queer history is thinking about how you fit into the traditional job market,” she continued.

Nicoletta Browne, a lecturer in the UCSB Earth Sciences Department who previously taught at Santa Barbara City College, advised LGBTQ+ students to “not put up with” educational spaces or departments that don’t validate their identities.

“If you’re not cis, and someone screws your pronouns up, you don’t just have to smile and be nice about that,” Browne said. “You don’t necessarily have to burn the house down either. But it’s not your job to make other people comfortable. It’s important that they get it right.”

“Whether they expect you to downplay your lesbianism or downplay the fact that you’re trans or whatever, that’s not something you should have to tolerate. And you can push back against that,” she said.

Her experience as a trans lesbian has also made her conscious of including marginalized identities and experiences in her teaching, especially her Earth 10 class, which focuses on polar science and Antarctica.

“I’ve been to Antarctica, I went there to collect samples for my master’s,” Browne said. “So now that I’m teaching that class, I try to do what I can to highlight Antarctic scientists and explorers who aren’t just white men, to what extent I can, because the history is still very dominated by them. But I try to look out for what examples of other people there are and to highlight them when I can.”

For Anthony Garcia, a production and events manager in the UCSB Music Department, his decision to join the Out List and publicly come out came from the importance of representation for his identity as a bisexual man.

“I felt it was important for me to come out publicly… because I have a sort of belief that no one’s really that straight, or that much on any end of the spectrum, to be honest,” Garcia said. “I think it’s important that we recognize that there are more examples of the in between and the where people fall on the spectrum.”

“I’m certainly like, straight leaning, I would say, but I think that’s valid. You know, I think there’s a valid experience there and a valid identity on that part of the spectrum,” he said.

“I think really the only reason I came out is because I wanted to participate in a progression of this, especially for men, a progression of identity and what’s available for us,” he continued, noting that his coming-out experience was very safe and came with little trauma.

Other faculty, like Amy Gonzales, an assistant professor in the UCSB Department of Communication, also found higher education as a safe space for her identity as a lesbian.

“One of the things I love about academia is that it’s a progressive space in which I feel safer, as a person,” she said.

Julia Pennick, UCSB’s Campus Advocacy, Resources and Education (CARE) Assistant Director of Advocacy, said she said her experiences as a queer lesbian eventually helped bring her into her career field.

“As I was coming to terms with [my] experiences I was also understanding that the field doesn’t talk about it—people who are supposed to be supporting—and I didn’t personally seek out support services because I had a community of people around me that I really felt like I could trust and help me through,” she said.

“But I wanted to be that for other people, and I wanted to make sure that folks who knew that they were harmed in a way that isn’t always talked about are okay, and that you can have had this experience, and we can talk about it, and it doesn’t mean anything less about your experience or who you are,” she continued.

For Larry McLellan, a lecturer in the UCSB Germanic and Slavic Studies Department with a specialty in teaching Russian, being openly gay has come with its own set of unique challenges when engaging with Russian culture.

“I haven’t been to Russia in quite a long time, and I don’t know if I’ll ever go back,” McLellan said.

While McLellan visited Russia in the ‘90s, its devolvement into homophobic culture and policies has made travel there difficult for openly out members of the LGBTQ+ community.

“I’m so clearly out here [in America] and out in my internet presence and Facebook. And I don’t know that I would feel safe being there,” he said.

McLellan said he has engaged in difficult conversations with LGBTQ+ students aiming to travel abroad to Russia.

“We don’t want them to have to go back in the closet when they go to Russia. But as things gradually got worse and worse and worse, in Russia, it got to the point where they were told you can’t even tell your host family in Russia that you’re gay,” he said.

“I’m always aware of the fact that, you know, what would happen if one of our students was in Russia, or we had encouraged them to go, and they got injured, or something worse, because someone found out they were openly gay, or even maybe not openly gay, maybe just secretly gay,” he continued.

Now, he advises his Russian students to travel to more LGBTQ+ friendly countries in areas like the Baltics, where they can take Russian language programs in more accepting spaces.

Kalli Talafus, front desk and test proctor assistant with the Disabled Students Program, described her experience as an asexual woman as “inward.”

“It seems so funny to me … being referred to as a part of the LGBTQ+ community, because it doesn’t feel like I am. Not in the sense, like ‘no don’t call me that,’ but just in the sense that, like I said, it’s a kind of very inward feeling,” she explained. “It’s not like I’m celebrating someone that I’m attracted to or in a relationship with, or that I’m celebrating being the gender that I am, you know, very outwardly.”

“The reason I say this is because I think that plays a part in, you know, my experiences as both a student and as a staff member … it doesn’t come up much, and I mean that it can be kind of lonely because it isn’t something that people talk about.”

According to Talafus, the solution to the general lack of conversation around asexuality is better visibility on campus.

“If there had been a community of people and or if there had been something more visual or more outward that said, ‘This is what asexuality is’ then I might have recognized that sooner instead of just kind of sitting there thinking like, ‘What’s wrong with me? I don’t want to have sex, I don’t want to be in a relationship with others, I’m weird,” she said.

Talafus said that on an institutional level, UCSB should work to create a better awareness of what asexuality is, because her experiences as a student and staff member have shown little institutional awareness or support for her specific community.

For some members of the community, like Carlos Nash, director of the Graduate Diversity Programs, coming out and being openly gay was a fraught experience in the largely conservative states, including Texas and Kansas, that he worked in.

“We all know that our identities are highly situational depending on a given context. And so usually you try to diminish the relevance of your sexual identity in a very conservative area,” he said. “[In] those instances microaggressions were very common and it was sort of like the people didn’t think about it.”

Nash said it was common for people to commit microaggressions, such as telling him he was lucky to not have children so he could do more work at the university. However, he said that at UCSB, his experience has been ‘refreshingly different,’ and colleagues and students alike have embraced his identity.

“They’ve been really embracing and empowering my other more negative experiences, [which] tend to often happen as microaggressions in conservative regions of the United States,” he said. “I have to say, part of it is that I think maybe part of my generation just learns to just deal with it in the sense of, we understand where it’s coming from, we know where they’re speaking from and we just kind of let it go. And we keep marching forward.”

“We usually don’t address it, but I think the newer generation of people call it out for what it is. Especially for a lot of people who don’t know they’re … committing microaggressions. I do appreciate a lot of younger people taking that time to say that’s a microaggression.”

Nash said that the support and encouragement of UCSB students has ultimately made his experience as an LGBTQ+ faculty member fulfilling.

“I personally would like to say that I owe a lot of my success and doing the things that I do to the people who I serve, which are students. I always want to put that out there because I want students to understand that sometimes they feel like administration or staff members or, you know, are not listening to them, but a lot of us are,” he said.

“When I’m talking about these sort of identity issues, I probably wouldn’t be where I am without student support.”

Sindhu Ananthavel and Asumi Shuda contributed to this article.