Perhaps no artist has had a bigger impact on modern indie folk music than Bon Iver. Never one to stick to a singular sound, with each album Bon Iver’s main creative force, Justin Vernon, seems to come up with a unique twist on Bon Iver’s unique formula of indie folk. Bon Iver came onto the scene with their 2008 debut album “For Emma, Forever Ago,” a quiet album that leaves the viewer with a sense of isolation and loss after heartbreak. Crafted by Vernon in a cabin in Wisconsin, the mythology surrounding “For Emma” has become as integral to the identity of Bon Iver as the music itself. The self-titled 2011 album “Bon Iver” finds itself in a completely different headspace than the first album. This is the first album where Bon Iver becomes more of a band than simply a creative outlet for Justin Vernon. 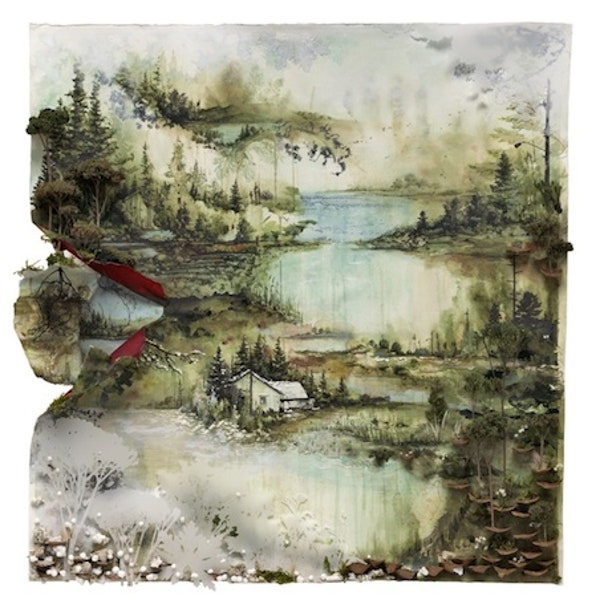 Vernon still lends his vision to the project but also enlisted a multitude of musicians to project their own creative ideas onto the songs and production. On this album Vernon moves away from the sparse instrumentation of “For Emma” and instead utilizes a broad range of instruments to create a cavernous sound. Additionally, the cryptic lyrics that Vernon utilized on his first album return with his lyrics often indecipherable upon first listen, his voice seems to take the role of an instrument, with the words he says seemingly coming second to the melodies that he crafts with his voice.

The idea of the album representing a journey is furthered by the fact that many of the songs on the album are named after locations, with song titles such as: “Minnesota, WI” and “Hinnom, TX.” Vernon himself has stated that each song on the album is meant to represent a specific time and place and in many ways the sound that Vernon created leads to a sense of nostalgia wherein each song brings the listener back to a certain time in their own lives and seems to be Vernon asking the listener to reflect. The fact that every song is meant to represent a different place and time is further reflected by the different sounds that each song utilizes.

While each song may have a different sound and texture, they all fall under the general style of indie rock or indie folk. The most strident of the songs is the opening track “Perth.”  The song is named after the city in Australia and was inspired by the death of actor Heath Ledger, whose birthplace was Perth. The track begins with a very soft electric guitar riff, before building to the chorus of the song with an orchestra of distorted electric guitars, Vernon’s vocals are somewhat buried beneath the sonic wall of instrumentation, but this emphasizes the idea of Bon Iver, rather than Justin Vernon’s vocals supported by a quiet acoustic guitar. The end of “Perth” returns to the quiet electric guitar that started the track, but instead of a fade out or the song abruptly stopping, the guitar that ends “Perth” is the same guitar that starts “Minnesota, WI.” This is perhaps the best example of the idea that each song represents a different place and that the whole album is a journey in and of itself.

The most popular song off of the album is the third track, “Holocene,” a very soft and quiet song that begins with a quiet electric guitar motif, a common theme for the album. The song slowly builds in volume, also adding additional instruments such as saxophones and slide guitar. There isn’t a sonic crescendo as there was on “Perth” and it leads to the idea of someone traveling, with each new instrument added a new sight or discovery along one’s journey. As with each song on the album the cryptic lyrics lead everyone to their own conclusion on the meaning of Vernons complicated poetry, but the most significant lyric on this song due to Vernon’s repetition of it is “And at once, I knew / I was not magnificent.” This seems to find Vernon at an existential crisis where one comes to the halting realization that they are not going to live forever and it is a call for everyone to realize that our time is temporary.

The album comes to a close on the song “Beth/Rest.” The title can imply that someone is at the end of their journey and they can rest. Vernon has stated that the first track of the album is meant to represent birth, so the listener can assume that the metaphorical journey that the listener has gone through, is a representation for life and so rest can come to mean the end of one’s life and what is often referred to as eternal rest.

This album fully brought Bon Iver to the limelight as one of the premier indie acts, as “Bon Iver” peaked at No. 2 on the Billboard Top 100 charts. The group won Best Alternative Music Album and Best New Artist at the 2012 Grammys. This album was also regarded as one of the best albums of the decade by Pitchfork. The album allowed for the group to experiment further with their sound, as with each subsequent release, they have moved further away from the folk sound that was essential to “For Emma,” but by doing so Bon Iver has avoided receiving the label of being a one trick pony. Rather, in the innovative and emotional spirit of “Bon Iver” Vernon has continued to pave the path for new indie artists to achieve commercial success.