Any UC Santa Barbara student or faculty member in the past eight years might recall Sara Sterphone’s bright head of hair and booming, contagious laugh, oftentimes paired with mismatched, bold clothing, walking through the halls of the College of Creative Studies or biking to campus. 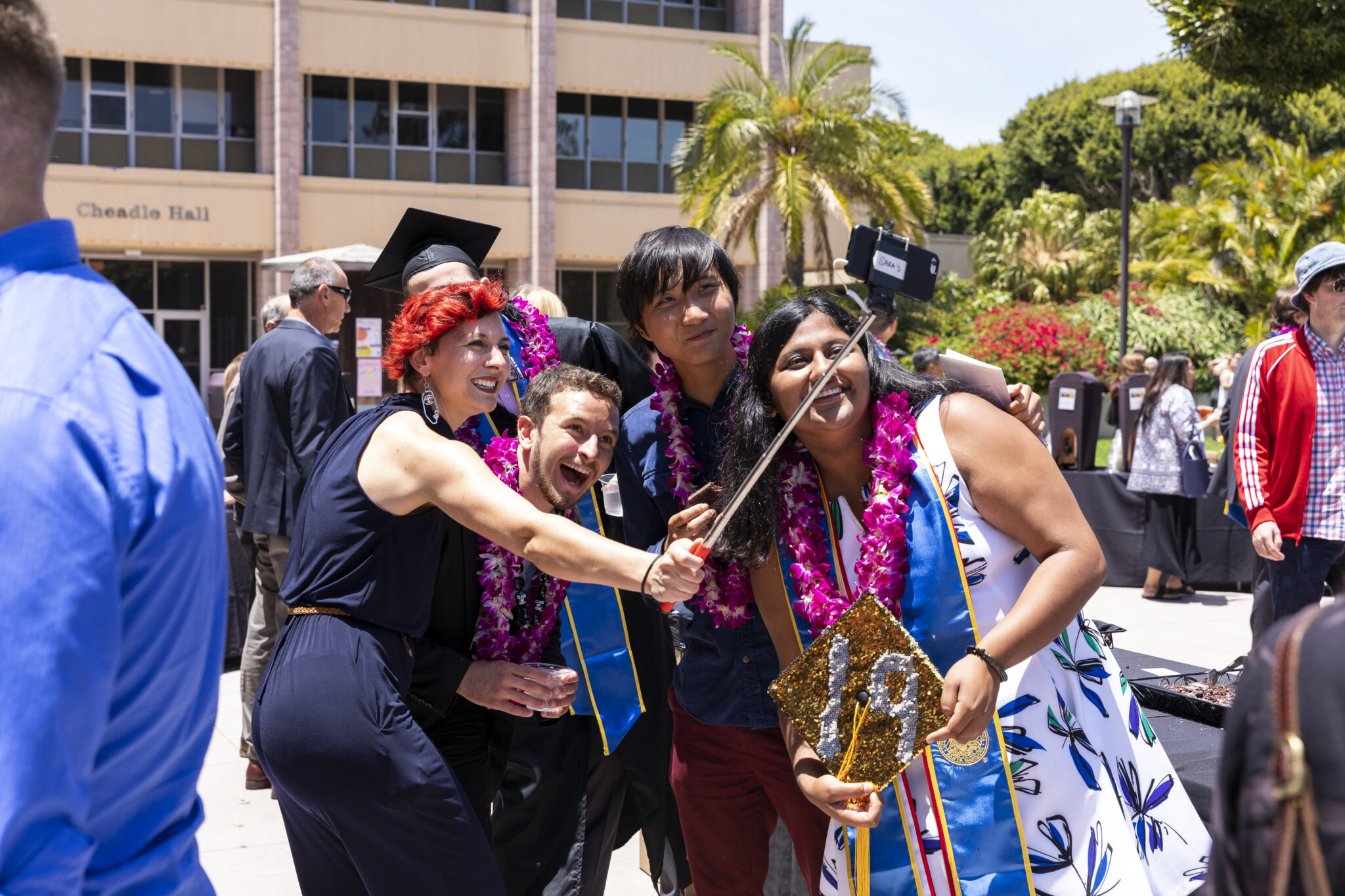 Sara will be remembered for, among many other things, being bold and unapologetic. The former College of Creative Studies (CCS) academic advisor, sibling, wife, daughter and friend passed away on April 25 after being diagnosed with NUT carcinoma in early 2020.

“Our grandma always had this habit of buying shit at Kohl’s and Nordstrom and being like, ‘Just kidding, I don’t want this,’” Sterphone said. “And rather than returning it, she’d say, ‘Hey Sara, do you want this thing I bought?’ And Sara would say, ‘Sure.’ So Sara had a bunch of clothes that were picked out by a 60 to 70 year-old woman, and she would just put them together.”

“Sara was unapologetic, and she was bold,” Sterphone continued. “She cut her hair short and dyed it red and wore gigantic badass earrings, and who cares? She just did it.”

Sara came to the UCSB CCS as an academic advisor in March 2013. Bruce Tiffney, the CCS dean from 2005 to 2016, said he recalled how Sara’s energy during her job interview brightened the room.

“She was decidedly nervous, but it was also a very high-energy meeting in the sense that when she came in, the number of lumens in the room rose,” Tiffney said. “After she left the meeting I said, ‘This is the kind of personality that would seem to best suit the college.’ Little did we know the intellectual capabilities that lay behind that.”

Despite coming into the position without any prior experience in academia, Sara learned “extraordinarily rapidly,” Tiffney said.

“She didn’t simply learn, she thought about [things] and she started asking questions … and raised her concerns directly to the dean from her entry-level position,” he continued. “‘Why are you doing this? Could this not be done better? Are we serving the students effectively by this particular policy or this particular approach?”’

Sara quickly became the lead academic advisor at CCS from September 2014 to 2019, one year after her hiring. In early 2020, she became the degree audit and reporting analyst at the UCSB Office of the Registrar after being recognized for her skills in data analysis.

Gerardo Aldana, the current dean of CCS, first met Sara when he was invited to serve as the associate dean in 2014, describing their first meeting as one of “excitement and enthusiasm.”

“I remember, [Sara and I] got together in the conference room, and she started laughing, and I thought, ‘OK, nice to meet you too,’” Aldana said. “And she said, ‘I just think it’s funny that you would ask me what I think your role should be,’ and it was that kind of sense of excitement, openness, enthusiasm [that defined her.]”

Megan Peterson, a CCS undergraduate advisor, first met Sara when coming to CCS to interview for her current position. Peterson said their first encounter with Sara was what convinced them to want to work at CCS and led to an enduring friendship.

“I remember going into the office, and it was just chaos,” Peterson said. “And [Sara] had rainbow-dyed hair. Her hair was literally dyed into a rainbow, and I was like, ‘That’s the coolest person I’ve ever seen on campus.”’

“When we sat down, she said, ‘I would be your supervisor,’ and I was like, ‘Shut the front door,’” she continued. “I thought, ‘I want to work here, I want to work with you.”’

Peterson added that she and Sara often bonded over astrology and “Steven Universe,” an animated television series.

“We would talk about that show all the time,” they said. “[Sara said], ‘You have to watch the show, it’s important.’ And then I would pull Tarot for her and do astrology stuff, and she was just like, ‘I want to support you,’ because I was getting really into [astrology], and she would let me read Tarot for her.”

After being hired to work for CCS, Sara continually “went the extra mile” for students, according to Christin Palmstrom, communications and development associate at CCS. She stayed after designated work hours to talk to students about their academic and personal issues, using her lunch breaks to walk students to various campus resources, Palmstrom said.

“She was always going the extra mile for students and staff,” Palmstrom said. “She just had a way about her that made you feel valued and made you feel respected and welcomed to a space.”

Sara’s knack to go above and beyond for students, faculty and family was described by J Sterphone as one of her life’s greatest commitments.

“I often sat [in the car] and waited for extra hours on multiple days because she was sitting with students who were having a crisis, or she was talking [to] some other office on campus to help a student whose paperwork got lost in the shuffle or who was late on getting something turned in,” Sterphone said. “Sara skipped her lunch breaks to help a student get started talking to a therapist or walking them over to [resources], that was the stuff she did every day, every week.” 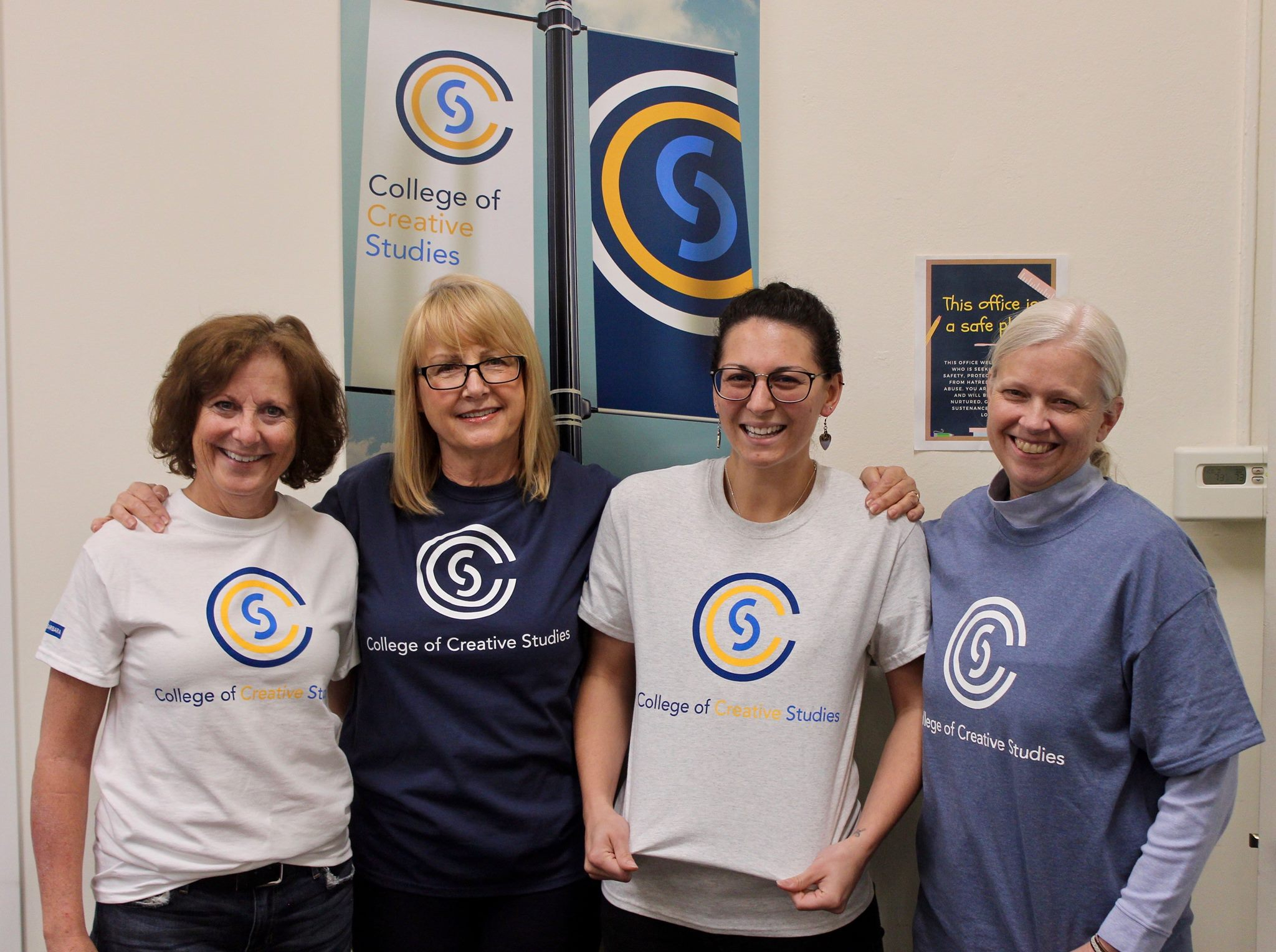 Sara continually “went the extra mile” for students, according to Christin Palmstrom, communications and development associate at CCS. Courtesy of Will Proctor

Sara’s contributions to CCS in particular were a culmination of personal interactions and acts of kindness and service, Sterphone said.

“Every single one of those is not the biggest thing that she did on campus, but all of those totaled up, [and] those are the kinds of things that would be the biggest impact she’s had,” they said. “The sum of all these small, everyday acts of service that she was doing for everyone, repeatedly, everyday.”

“Everyone felt like Sara was your best friend, and she treated you that way,” Jeronimo said. “I think that’s the one quality all of us will remember about Sara, that she cared about us.”

Jeronimo read out a card Sara wrote to her before officially transitioning into the Office of the Registrar as the Degree Audit and Reporting Analyst.

“‘Hi Venilde, I just wanted to take a moment to say, thank you for being such an amazing person in my life,’” Jeronimo read.

“That’s the first sentence and it just goes on like that. She was like that with everyone, she made you feel like you mattered,” she said.

Many noted Sara’s laugh as one of the most distinctive features about her, embodying her effervescent, joyful spirit.

“She had this contagious, giggle laugh, and it made everyone happy when she giggled like that,” Jeronimo said. “You could hear it from her office, even if she closed the door.”

J Sterphone described a memory of Eric Rind, Sara’s husband, as a testament to her infectious laugh.

Many noted Sara’s laugh as one of the most distinctive features about her, embodying her effervescent, joyful spirit. Courtesy of College of Creative Studies

“He was in the car [in the parking lot], and she was at CVS pharmacy, and as the door would open to the CVS, he could hear her laughing in the pharmacy,” they said while laughing. “She just had that kind of laugh that had volume, and it was an absolute treat.”

“You can tell when she was around because she would laugh at many, many things in the very best of spirits,” Tiffney said of Sara’s signature laugh, which signaled her expansive good humor.

“She had a slightly high, nasal laugh, and she had the lung power that was not something subtle. It was her expression of being alive.”

This lung power contributed to Sara’s talent for singing as well, as Tiffney described when reminiscing his favorite memory with her. When he, his wife and Sara would take a van along with current UCSB students to meet with prospective campus applicants, Sara would often burst into song.

“To keep the drivers happy and everybody entertained, Sara would often be sponsoring singalongs to various Spotify soundtracks, and I can remember a fair number of songs from Frozen that got sung about three times,” Tiffney continued. “It was just that spirit of having fun and being alive and being together and enjoying each other’s company.”

Sara loved to sing — so much so that she joined a German choir with her sibling, despite not speaking a word of German.

“About three years ago, through a series of weird circumstances, [Sara and I] ended up in a German choir,” J Sterphone said. “Everyone in that choir, except for us and one guy who was paid to be there, was over the age of 70 … and neither of us are German.”

“I picked up the soprano part and Sara picked up the tenor part … And [at home], we would just be singing this excerpt with breaks where the other parts [we didn’t sing] were supposed to be, just me and her switching back and forth between these parts. It was off, and it sounded so bad,” they continued while laughing.

Sara’s passions also included playing and creating board games, which she enjoyed for their strategy and mental skill.

“I actually first met Sara outside of CCS when I was a student, where J hosted these board game nights,” Palmstrom said. “She’s very into gaming, and it was nice because she made you feel like she wanted you there and wanted you to be a part of it.”

“I know she was into games like Agricola, Core Worlds, King of Tokyo and Betrayal [at] House on the Hill,” she continued. “She tended to like a lot of strategy games.”

Aldana said Sara loved these puzzle-like games, naming it as one of her many hobbies.

“Her huge thing was board games, and she was designing board games at one point,” he said. “Puzzles and mental tricks, stuff she absolutely loved.”

In remembering Sara’s vibrant life, many shared lessons they took away from their time with her.

“Enjoy the fact that you are alive and sentient,” Tiffney said. “Enjoy that not only in terms of paying attention to the physical surroundings you are in, the planet you are on, the sunlight, the birds, everything else, but also the other human beings.”

“Enjoy life, life is short,” Palmstrom said. “Even though Sara passed away when she was still pretty young, she had a huge impact on the community that’s going to be felt far into the future.”

“Live your life to the fullest,” Jeronimo said. “Live it now, don’t wait until tomorrow. Make it happen, and don’t wait for somebody else to make it for you.”

J Sterphone said that in honoring Sara’s memory, they are working to learn to be unapologetically themself, a lesson that Sara taught by example.

“There’s all of these places where Sara was so confident and bold and brave and able to be just her unapologetically, and able to stand up in so many ways for others,” they said.

In honor of her dedication and contributions to CCS and the rest of UCSB, Sara posthumously received the 2021 Margaret T. Getman Service Award, and CCS established the Sara Sterphone Memorial Fund in her memory. A Book Arts memorial project headed by two CCS Book Arts alumni is also currently in the works to celebrate her life, and prospective contributors can submit their memory of Sara to the project.

“She was irreplaceable to everybody she touched, and fundamentally irreplaceable to me,” J Sterphone said. “She was just infectious in every way, and you just couldn’t not like her. There’s no one with whom I can ever have the relationship that I had with her again.” 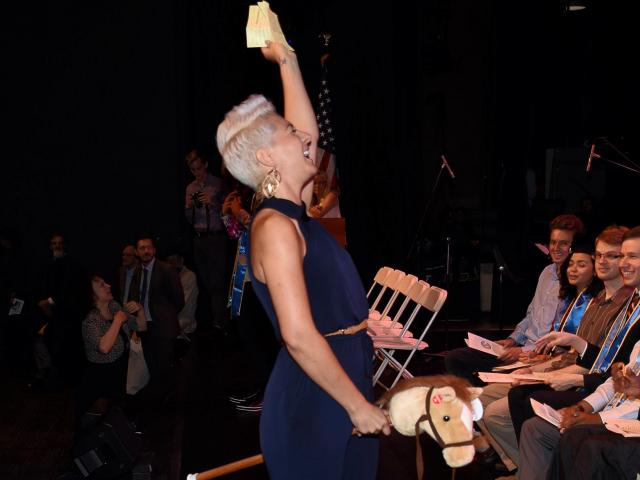