The Daily Nexus
Opinion
Things About America That Just Don’t Make Sense
June 3, 2021 at 11:11 am by Athina Mihalopoulos 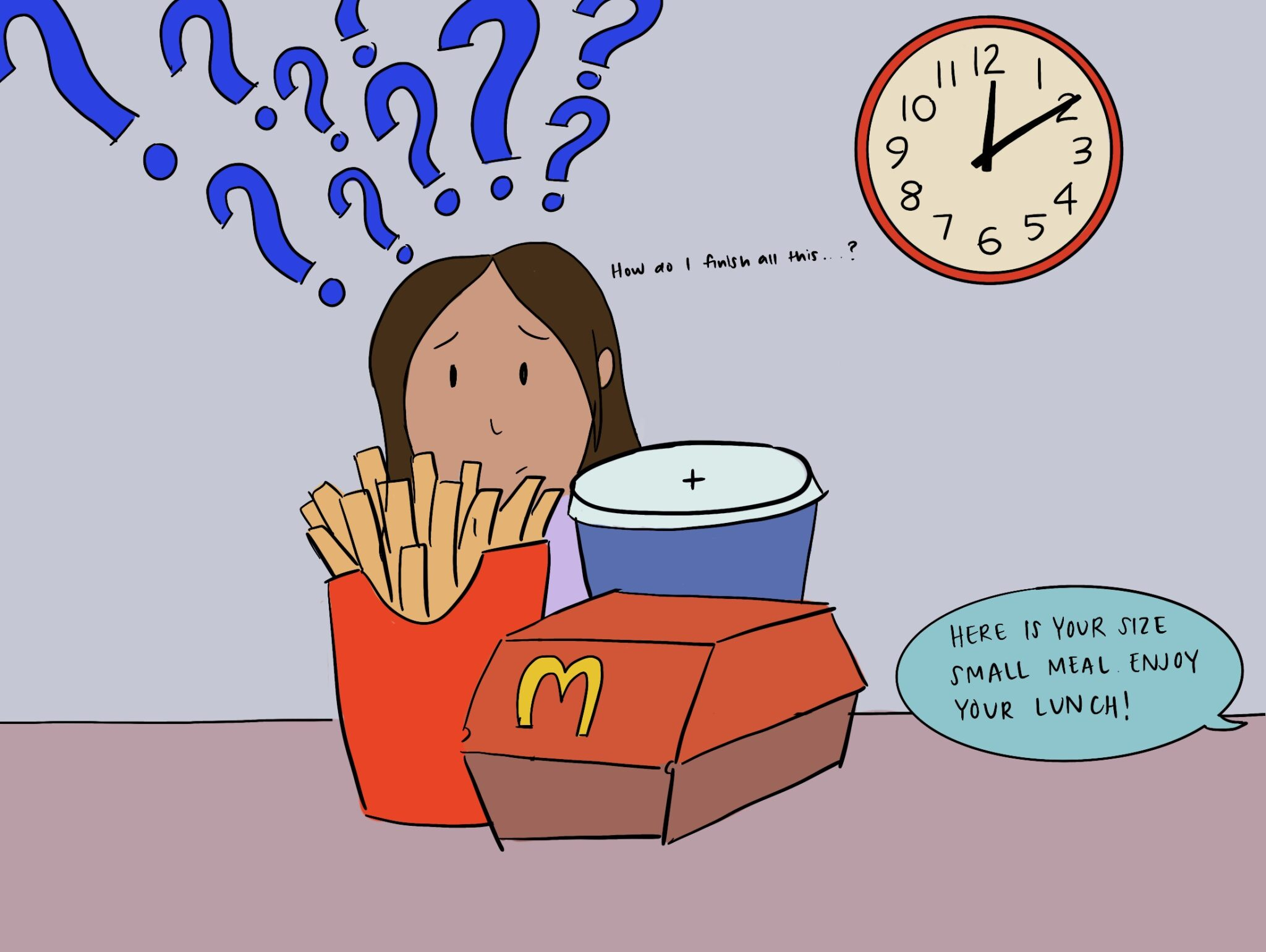 I never thought that moving to the other side of the globe and entering a new culture would impact me in any sort of way. I had heard stories of international students experiencing “culture shock,” but had never thought that I would fall victim to that. Having visited the United States plenty of times, I always thought I understood U.S. culture and didn’t notice many differences. However, visiting is entirely different from actually living here. Many Americans talk about the culture shock they experience when they visit Europe for the first time. I think that as an international student from Greece, it’s my turn to now point out the differences I’ve noticed between America and Europe after living here for the past eight months. (Note that everything stated below is from my experience only, and not a generalization of how Europeans and Americans act.)

The first thing that shocked me when I moved to the U.S. is how early the meal times are. Lunchtime can start as early as 2:00 p.m., while in Greece it will be around 4:00 p.m. or 5:00 p.m.. Even dinner, it’s as early as 6:00 p.m. here, while in Greece it will be around 10:00 p.m. I can’t even count the times when I would look for a restaurant that was open at 9:00p.m., and all of the kitchens were already closed. That’s something that you would never experience in Europe. Even if you haven’t booked a table at a restaurant, you can still go at 11:00p.m., and the kitchen will be open and ready to take orders.

In addition to the meal times, the portion sizes are even more astounding. I would order a small sandwich and it would be the size of a European large. From that, it’s understandable why calories are written on almost every menu right next to the dish. The portions here are so big that in one meal you might consume as many calories as you would in three. It’s so common for me to experience a “food coma” after a single meal just because I’m used to having much smaller portions back home.

It didn’t take me long, though, to realize that food doesn’t have the same value here that it has back home. In Europe, especially southern Europe, eating together is a way of enjoying each other’s company, which is why a casual dinner can take up to three hours. That’s because we will first start with talking, continue with some drinks and after many appetizers will follow with the main meal and dessert. Even after that, more chatting will continue and maybe some more drinks to close the night. In the U.S., I haven’t seen lunch and dinner hold the same kind of value, unless it is a celebration. It seems that the goal of eating here is strictly to satisfy your hunger, and it can be done as quickly as within 10 minutes.

I understand, however, that fast-food chains are a big influence on why eating happens so fast. And that’s another thing about the U.S. that makes no sense to me: Why are there so many different options of such unhealthy food at literally every corner of every block? Processed food is the everyday normal here. In Greece, homemade food is all you know. Unless it’s the weekend and you’re out with your friends, during the week there is at least one home-cooked meal every day.

I’m also impressed by how popular online shopping is here, especially how often Americans use Amazon, eBay and other online shops. Shopping does happen in Europe, of course, but it’s usually for bigger things and not part of the daily lifestyle. I think that’s why America is viewed as more of a consuming society compared to Europe, because they consume something every day and don’t use the goods of their home as much as Europeans do.

Each culture has its own unique characteristics and things to offer, so I feel extremely lucky that as an international student, I’ve had the chance to experience both.

Adjusting my consuming habits has also taught me a lot about customer service in the U.S. I wish I knew how important tipping is before I moved here. In Europe, after you eat outside, you might leave a dollar or two for the waiter, and it’s not even necessary. Here, tipping is often the social norm, and at most times the minimum is 15%. Had I known that, I probably wouldn’t have come off as rude during my first few weeks here.

Just as I wish tipping would just be included in the check, I wish the same for the sales tax. How am I supposed to know the true price for everything when the sales tax is not included on the price tag? I got a cute pair of jeans that was $12.99 and when I paid, it suddenly became $13.60. Why not include the tax in the original price so you know exactly what you’re paying for? It doesn’t really make sense to me.

Another thing that doesn’t make sense to me is the drinking and driving age here. An American can start driving at 16 years old but can’t drink alcohol until they’re 21? Then what is the point of becoming a legal adult at 18? In Greece and most European countries, turning 18 is the true start of your adulthood, since that’s when you can get your driver’s license and start drinking alcohol. The fact that all of my American friends have been driving for two years now while I haven’t even gotten my license yet makes me feel very young, but then I think about how they won’t be able to drink legally until their junior year in college, and that makes me feel much better.

After living here for eight months, it finally hit me: I’ve barely seen any Americans smoking cigarettes. That’s a huge surprise, especially because smoking weed and vaping are extremely popular here, especially in California. In Europe, it’s pretty common for people to smoke cigarettes just for the style. I’ve heard that Americans are very aware of  smoking’s health hazards, so if you see a person smoking a cigarette or a cigar on the street, you’re weirded out.

But apparently, you’re not weirded out by wearing outdoor shoes inside the house? I remember, ever since I was a young kid, the first thing I would do before entering my house would be to take off my shoes. I guess the same doesn’t go here, and you can walk into other people’s homes without asking if you should take off your shoes before walking in. I wish I knew that before I took off my shoes at my friend’s entrance and her whole family got really confused.

Anyway, that was nothing compared to my realization that you don’t kiss a person here when you first meet them. Back home, when you meet someone, you exchange two kisses on the cheeks. I guess just a handshake here is enough? I really thought people were just cold-hearted, but I guess kissing strangers is just not normal here.

Noticing all those differences has helped me adapt really well, and I no longer go around kissing people when I meet them. I continue to learn things about America every day, and this culture never fails to surprise me. Each culture has its own unique characteristics and things to offer, so I feel extremely lucky that as an international student, I’ve had the chance to experience both. Europe and the U.S. can be viewed as two completely different worlds, but what I’ve learned is that in the end, our similarities are much bigger than our differences, and learning about a new culture can be eye-opening.

Athina Mihalopoulos thinks that every international student might experience “culture shock” in order to adapt to an American lifestyle.

Actually a very well written and interesting article – very rare for the Nexus these days.