His Holiness the 14th Dalai Lama spoke at a virtual keynote event hosted by UC Santa Barbara Arts & Lectures in association with the Department of Religious Studies on May 18. The conversation, moderated by Pico Iyer, friend and student of the Dalai Lama for more than 40 years, was part of the university’s 2021 Creating Hope initiative. 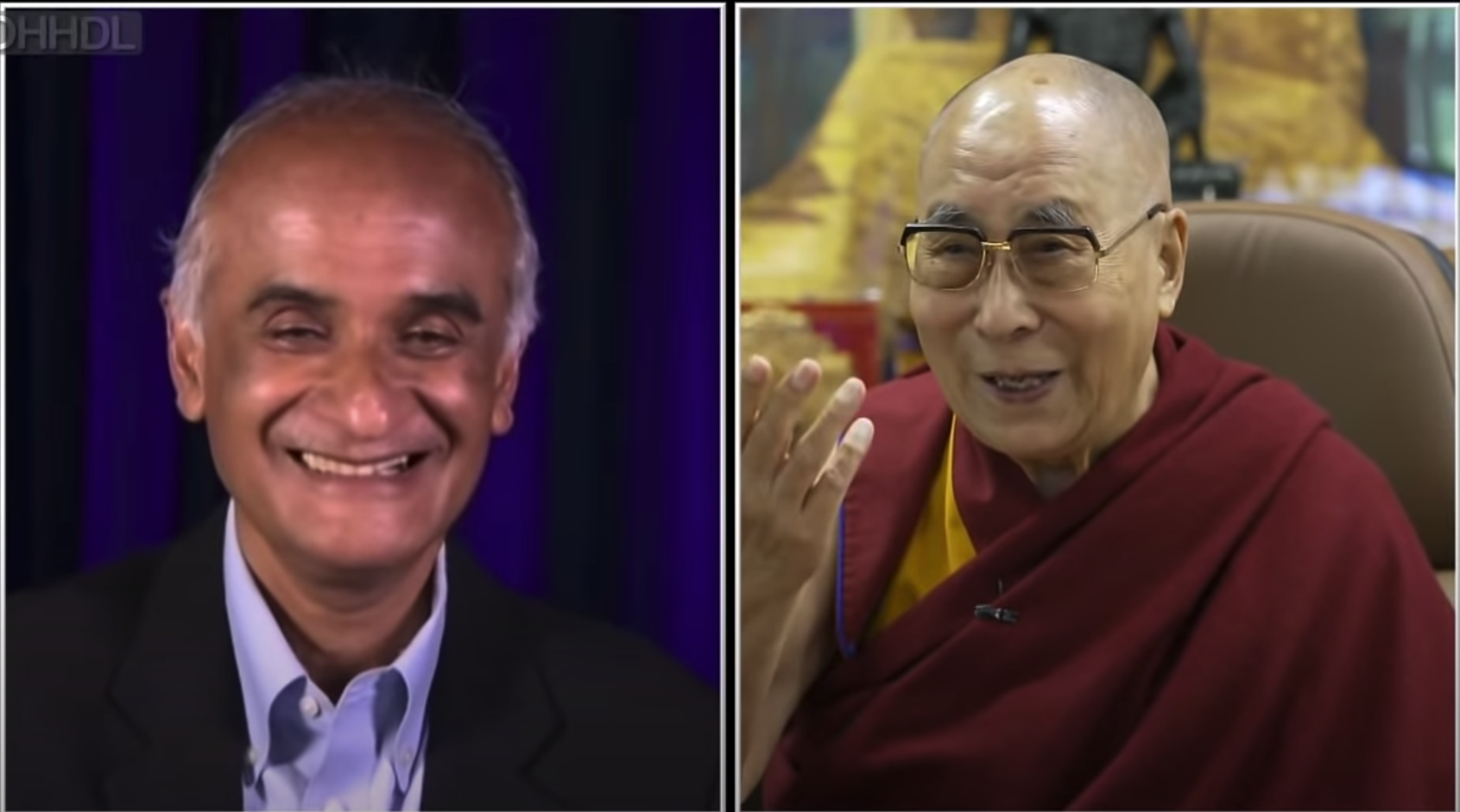 The conversation, moderated by Pico Iyer, friend and student of the Dalai Lama for more than 40 years, was part of the university’s 2021 Creating Hope initiative. Courtesy of “Creating Hope” Livestream

The event, which marked the 20th anniversary of the Dalai Lama endowed chair in religious studies at the university, was streamed virtually to UCSB students via Zoom from India, where the Dalai Lama resides.

The 14th Dalai Lama is believed to be the manifestation of the bodhisattva of compassion and is seen as the highest religious and political leader in Tibet. This is his fifth visit to UCSB, with his most recent visit being in 2009.

“We are living in a moment that calls for optimism, resilience, courage and vision, and who better to spark those qualities within us than the Dalai Lama and our dear friend Pico Iyer,” Billeci said during the event.

UCSB Chancellor Henry T. Yang was also in attendance and thanked His Holiness for coming and explained the impact of the Dalai Lama professorship during his opening statement.

“The establishment of the Dalai Lama professorship has provided countless students and scholars with the opportunity to explore the richness of Tibetan Buddhism and the history of the culture of the Tibetan people, as well as strengthened our highly regarded Department of Religious Studies,” Yang said.

Iyer then opened the discussion with the Dalai Lama and asked what the Buddhist understanding of hope is, to which the Dalai Lama responded that “a peace of mind” and kindness are essential to regulate hope.

“From birth, our life is very much based on hope for good,” His Holiness said. “We all grow under mother’s care, and that is the time to cultivate our mind, compassion … So mother’s kindness is very, very essential.”

Iyer then asked how “we can train ourselves to be realistic in our hopes.” His Holiness replied that focusing on keeping a “wider perspective” and “long-term interest” is essential to keeping self-confidence and strength.

The conversation then moved onto the subject of religion, and the Dalai Lama said that religion is built upon faith, kindness and compassion.

According to His Holiness, the traits of honesty, love and compassion transcend religion and are primarily there “in order to carry a successful, happy life.”

He then emphasized the need for “a sense of oneness” among people, saying that underneath all differences, everyone is human.

“When we live with luxuries, there is too much distinction: different nationalities, different religions, and we do the same for rich and for poor,” he continued. “When we face tremendous, desperate difficulties, then you get a feeling of oneness.”

Iyer then asked His Holiness about climate change and how people can continue to have hope in the face of a “big challenge in front of all humanity.”

“We should use this serious matter as reason to [no longer] fight,” His Holiness replied. “We have to live together. East, west, north, south, we are all the same human being. We all live on this same planet.”

Iyer inquired of His Holiness if he himself ever had times when he was losing hope amidst difficulties in life. The Dalai Lama responded with his experience of escaping from Potala Palace in Lhasa, the Tibetan capital, in March 1959 amidst the forced occupation of Tibetan land by Chinese forces.

“I escaped with the feeling of whether I can see [the] next day or not,” His Holiness said. “But the next day, sunshine came and I felt, ‘Yes, I survived, no problem.’”

He then spoke about his experience in India, where he learned of samatha and vipassana meditation, an ancient Buddhist meditation practice focusing on calming and clearing the mind.

“[It is] an analytical meditation with a message of ahimsa, non-violence, and karuna, compassion,” His Holiness said.

Iyer asked His Holiness about “how to deal with death and loss” amidst the pandemic.

“I very much appreciate many doctors, scientists and nurses; they really are helping and doing something about this illness,” His Holiness replied. “But as a Buddhist, this very body is the basis of all these different illnesses.”

“According to Buddhist psychology, I think a peace of mind often makes some difference,” he continued.

Iyer mentioned His Holiness’ “faith and confidence in young people” and asked for his reason behind being hopeful for the future of the younger generation.

“I think our older generation often used to copy what happened in the past,” His Holiness said. “But [the] younger generation [is] more open, and on top of that, you see more knowledge about the human mind [in] academics.”

He focused specifically on education in India, where he currently resides.

With His Holiness now having lived for 85 years, Iyer asked whether he believes that the world is a better place compared to 85 years ago, to which he responded that “some difficulties are helpful” to learn from in order to overcome future struggles.

He continued by saying that global difficulties like the pandemic and climate change allow the world to learn lessons on how to overcome these issues, rather than give up.

“Sometimes, it is the difficulties that [allows us to] work on our mind,” His Holiness said.

“Eventually, the whole world should develop a kind of union [where] we’re just one human species,” His Holiness said. “A more serious, difficult situation sometimes is very helpful to wake up and find that our old thinking is outdated.”

The conversation ended with His Holiness leaving final words for UCSB students and other attendees.

“Our future is very much based on education,” he said. “I think you can really make a significant contribution for a better world. Thank you.”

This guy is has been in bed with the Theosophical Society forever – not anybody to listen to.Also – the man credited with single handedly bringing Tibeten Buddhism to the “West” was the dalai lama’s emissary, Gerald Yorke….who was a personal friend and secretary to Aleister Crowley. And if you dont know who he is – look him up.

Last edited 11 months ago by Anonymous

I’ve met he dalai lama. He asked me if I was still meditating.