The Daily Nexus
News
Nine Greek Life Institutions Violated COVID-19 Public Health Orders in the Past Year
May 28, 2021 at 11:05 pm by Atmika Iyer

Local chapters of the Delta Tau Delta, Alpha Tau Omega, Sigma Chi, Sigma Phi Epsilon, Zeta Beta Tau and Zeta Psi fraternities and Delta Gamma, Pi Beta Phi and Alpha Phi sororities have all received warnings over the course of this academic year after being reported for violating public health orders by hosting or participating in large gatherings during the COVID-19 pandemic. 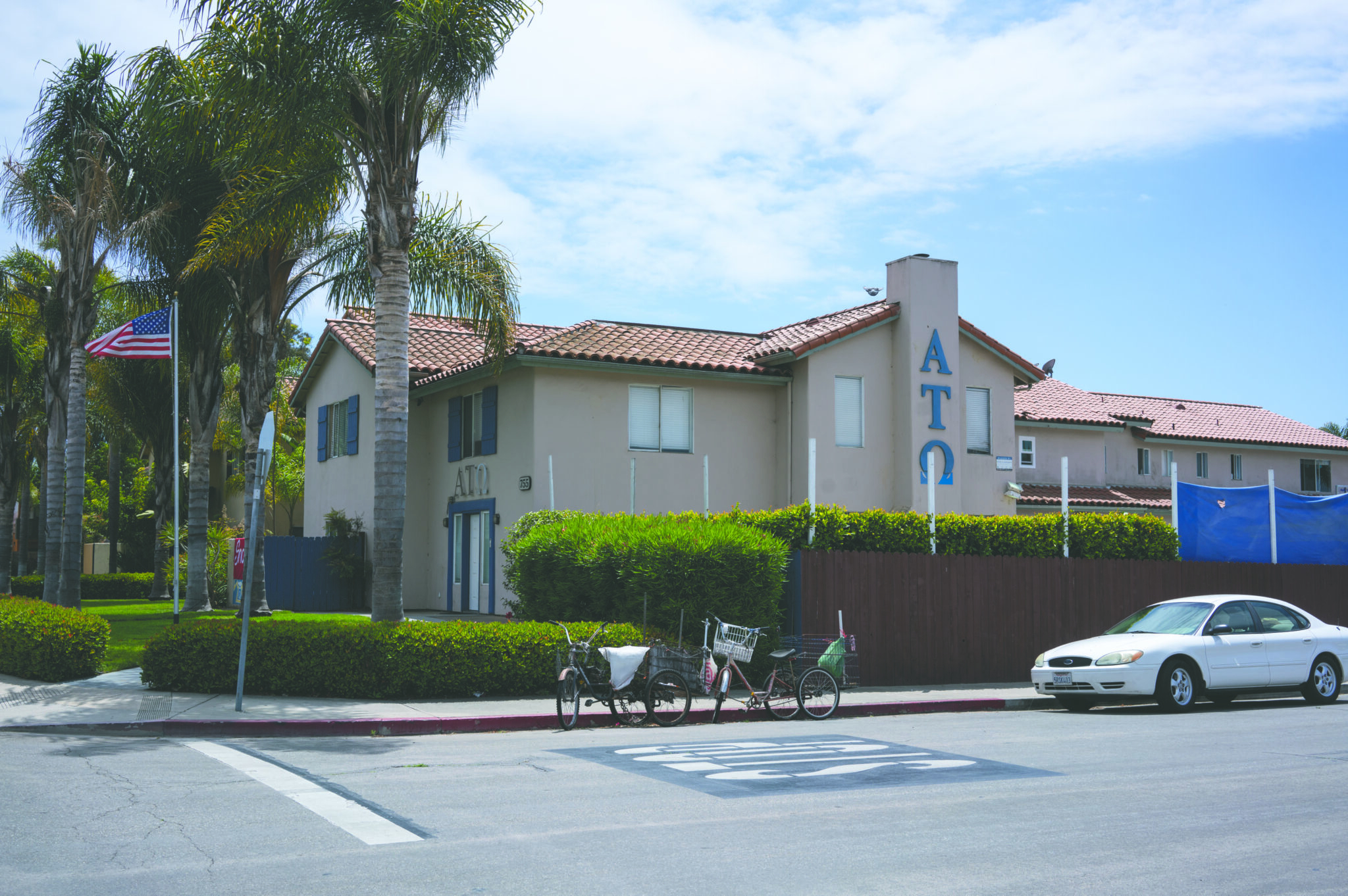 ATO was the only Greek Life institution to be sanctioned after violating public health order. (Sicheng Wang / Daily Nexus)

Of the nine, Alpha Tau Omega, Delta Tau Delta and Pi Beta Phi were repeat offenders. Alpha Tau Omega was the only offender to be sanctioned, eventually resulting in social probation and the loss of their Spring 2021 recruitment. All others received warnings.

When a registered campus organization is reported for violating public health orders, and there is sufficient evidence of the violation, the offender is referred to UC Santa Barbara’s Registered Campus Organization Conduct Board. The board will then investigate the violation and, in some cases, impose sanctions, when deemed necessary, according to the university’s COVID-19 violations dashboard. The dashboard stipulates that the “the university also works with national headquarters, as well as advisors and chapter presidents,” when the offending registered organization is a member of Greek life.

UCSB’s PRA office responded to the request with the names of all offending Greek organizations, the offense, the consequences of those offenses and the warning letters sent to the offenders from August onwards.

Not a single UCSB chapter president responded to the Nexus’ multiple requests for comment.

In response to the violations by fraternities, Todd Shelton, the chief communication officer for the North American Interfraternity Conference, said in a statement that “overall, we believe fraternity chapters are taking public health guidelines to heart and have adjusted operations and activities to keep members and the community safe.”

“While some may struggle with COVID fatigue, we fully support holding accountable any campus groups alleged to be violating guidelines,” the statement continued.

“Fraternities continue to be an important asset to campus during this pandemic as research finds fraternity members benefit from engagement significantly more than non-members and report higher levels of positive mental health along with lower rates of depression and anxiety.”

The first violations stretch back to August 2020, when Delta Gamma was reported for allegedly hosting a gathering of more than 50 people at its satellite house. The national chapter did not respond with a comment on the UCSB chapter violation.

“Delta Tau Delta Fraternity expects its member chapters to obey all local health guidelines when planning events,” the release by Jack Kreman, Delta Tau Delta’s chief executive officer, read. “The safety of members and guests is our top priority. We are pleased with how our chapters have worked with the local authorities to preserve the fraternity experience while remaining good citizens in their communities.”

Alpha Tau Omega was reported three different times. On Oct. 10, they were reported for allegedly hosting a party at a chapter house. The fraternity received social probation until the end of Fall Quarter 2020 in response.

Alpha Tau Omega was reported again one month later for allegedly hosting a party at a senior house, for which they received extended social probation until the end of Winter Quarter 2021. Alpha Tau Omega was warned that if it committed another offense, it would lose spring recruitment.

Alpha Tau Omega was reported for a third time this January for allegedly hosting a party at a satellite house, resulting in the loss of spring recruitment. The national chapter did not respond with a comment to the UCSB chapter violation.

Pi Beta Phi received two separate reports in the span of two weeks in January. The first was for allegedly hosting a gathering of over 50 people at its satellite house.  The second report was for allegedly attending a gathering with Alpha Tau Omega. This is an offense because “no fraternities or sororities are permitted to socialize with organizations that are on social probation,” according to the warning letter Pi Beta Phi received from Suzanne Perkin, the associate dean of student life. The national chapter did not respond to requests for comment.

Alpha Phi was also reported for allegedly attending a gathering with Alpha Tau Omega. The national chapter did not respond with a comment to the UCSB chapter violation.

Some time between Jan. 8-10, Sigma Chi was reported for allegedly hosting a gathering of more than 50 people at a satellite house. The national chapter did not respond with a comment to the UCSB chapter violation.

Feb. 9, 2021, Sigma Phi Epsilon was reported for allegedly hosting a gathering at a chapter facility. The warning letter Sigma Phi Epsilon received from Perkin said that “the reporting party saw multiple groups of women entering the house without masks and also mentioned very loud music.” The national chapter did not respond with a comment to the UCSB chapter violation.

Feb. 12, 2021, Zeta Beta Tau was reported for allegedly hosting a gathering at a senior house of around 30 maskless attendees. Libby Anderson, the chief executive officer for the national chapter, declined to comment and deferred to the North American Interfraternity Conference.

Feb. 22, 2021, Zeta Psi was reported for allegedly hosting a gathering at its satellite house with more than 25 people.

The national chapter of Zeta Psi and Perkins clarified that the gathering Zeta Psi was issued a warning for was hosted by a graduated student who was not an active member of the chapter anymore.

Perkins said “the warning was issued to the organization because of the perception that the event was a Zeta Psi event.”