The Daily Nexus
News
Few UCSB Campus Facilities Reopen in a Slow Return to Normalcy
May 25, 2021 at 11:00 am by Sindhu Ananthavel

After a year of closure due to the COVID-19 pandemic, UC Santa Barbara’s campus is slowly  coming back to life, with a few campus amenities now slowly reopening to students. The Recreation Center, University Library and Portola Dining Commons recently opened up this quarter and have offered a taste of on-campus life for students. For some, it’s a reminder of what campus used to be, while for freshman and transfer students, the buildings are a new experience altogether.

To aid with reopening, students are required to show a digital “green badge” to gain access to all on-campus facilities that are currently open, which indicates that the individual has had a negative COVID-19 test within the past week and has filled out COVID-19 Symptom Screening Surveys via the Student Health Patient Portal. 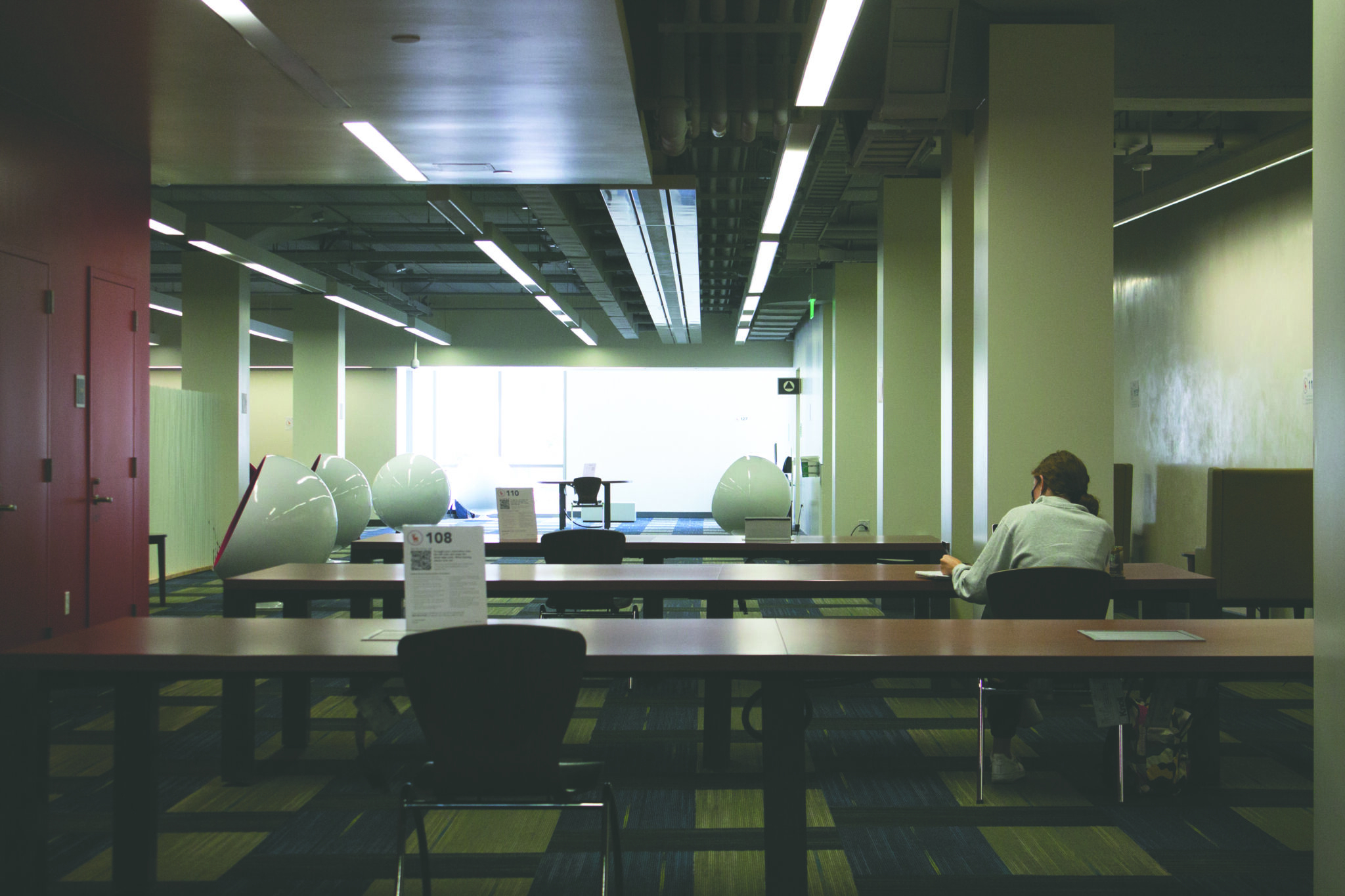 Re-opening is occuring in a four-phase process, with Phase 3 beginning on May 17, according to Hannah Rael, the library’s communications & marketing manager. Kaiyi Yang / Daily Nexus

The UCSB Library was the first of the campus entities to reopen its doors to students on March 29, currently offering limited study space at 25% capacity. Students are required to make reservations up to two weeks in advance to book a seat.

For first-year Spanish major Eliza Howard, the library provides a connection to UCSB she felt she largely missed out on during the 2020-21 school year.

“Going to the library has not only allowed me to have kind of a quiet place to do work where I’m not just cramped in my house with all my roommates, it’s also just made me feel a lot more on-campus,” Howard said. “Being able to go on campus has allowed me to see new faces and feel more a part of the community just by walking around and getting myself acclimated to how life will hopefully be next year.”

Tables for study space in the library are spread out more than six feet from each other, and COVID-19 safety guidelines are in place, including a mask-and-desk sanitation mandate. Howard noted that other library-goers adhered to the guidelines and said she felt safe in the environment.

Hannah Rael, the library’s communications & marketing manager, said that reopening is occurring in a four-phase process. Rael said Phase 3 began on May 17, with 261 open seats and 25% capacity. According to Rael, though the reopening plan required many approvals from university administration, there were only a few adjustments made by administrators to adhere to pandemic safety precautions. For instance, ventilation was not an issue because the air filtration system in the library is “the same level as what would be in a hospital.”

Rael said that along with being able to adapt to county guidelines, the four-phase opening model is flexible to student feedback.

“When we started Phase 1, we were only allowing users to book up to 15 hours per week, and we got some feedback that some people wanted to be there longer,” Rael said. “So when we moved into Phase 2, that went up to 20 hours per week.”

Other library offerings include access to print stations and private room reservations meant for job interviews or meetings, both of which are frequently requested by students.

By the end of Phase 4, the entire first and second floor will be open, though still at limited capacity, while the rest of the building will remain closed. Rael said the goal is to open up the entire library by the summer, with the hopes that operations will be “near normal” by fall.

“People coming into the library have been really good about following protocol … so far, only 85 people, which is about 7% of the total people that have used this space, have had to have some sort of reminder or warning, such as needing to wear a mask or not being allowed to eat,” Rael said.

“I think people are really understanding of why we have some of the limitations that we do. And for the most part, people are being really positive that we were able to open at all before the end of the year,” she continued. “The library is so central to so many student memories and the general experience of being a Gaucho.” 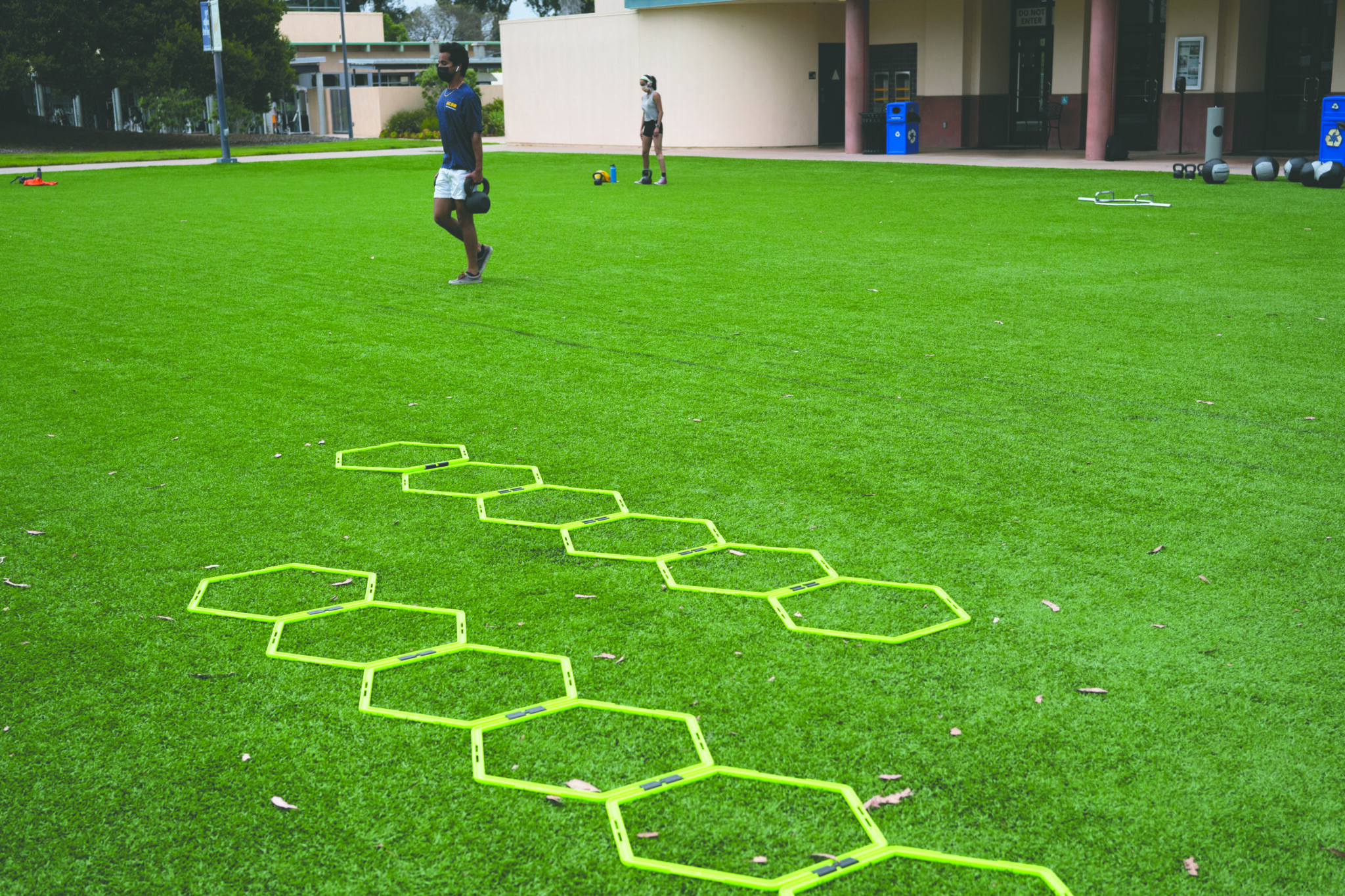 Currently, only the Rec Cen’s outdoor amenities — including the outdoor fitness area, swimming pool and rock climbing wall — are open for use. Sicheng Wang / Daily Nexus

The Recreation Center (Rec Cen) opened on April 12, but prior to its reopening, went through a rigorous process to gain approval, according to Jarrell Garcia, assistant director for operations at the Department of Recreation.

Because the Rec Cen usually accommodates physical activity in both indoor and outdoor settings, stringent health and safety standards were required, and plans for reopening were constantly changing, Garcia said. Opening in spring quarter was the best plan because opening any earlier in the year would have likely resulted in an immediate shutdown.

“Things were literally being updated on a weekly basis. I’d put together a final plan and then people would tell me, ‘You just missed the press conference, all those things have changed,’” Garcia said. “But even if we were to open [earlier], we would have experienced what some of our colleagues at other UCs experienced, which was opening and then immediately getting shut down two days later, if not a couple weeks later.”

Like the library, the Rec Cen is opening in a four-phase plan. Currently, the facility is in the first phase, with only outdoor amenities — including the outdoor fitness area, swimming pool and rock climbing wall — open for use. Individuals are required to wear face masks at all times and wipe down any equipment before and after use.

The Rec Cen also operates on a reservation-based system. During its opening week, it offered approximately 2,500 open slots per week and has now expanded to offer 4,400 slots per week. Garcia said that slots were fully booked during the first week.

According to Garcia, the most difficult challenge is not being able to offer the extra space that comes with indoor facilities, along with the number of safety protocols required, but he said most students have taken the shift in Rec Cen offerings in stride.

“We were prepared to receive a ton of complaints and issues and for everything possible to go wrong,” Garcia said. “But honestly … most people have just been happy that we’re open, and that makes me happy.”

Second-year biochemistry major Victoria Del Rosario said that she appreciated having the Rec Cen open, even under pandemic safety restrictions.

“It was definitely different having everything outside, but it’s still nice to have a place to get out of the house and work out,” Del Rosario said. “Obviously it’s not the same as last year, but I would say it still does make me feel very connected to campus.”

Del Rosario added that the center was very clean and organized, and in terms of safety protocols, the Rec Cen staff were “doing pretty much everything they can.” 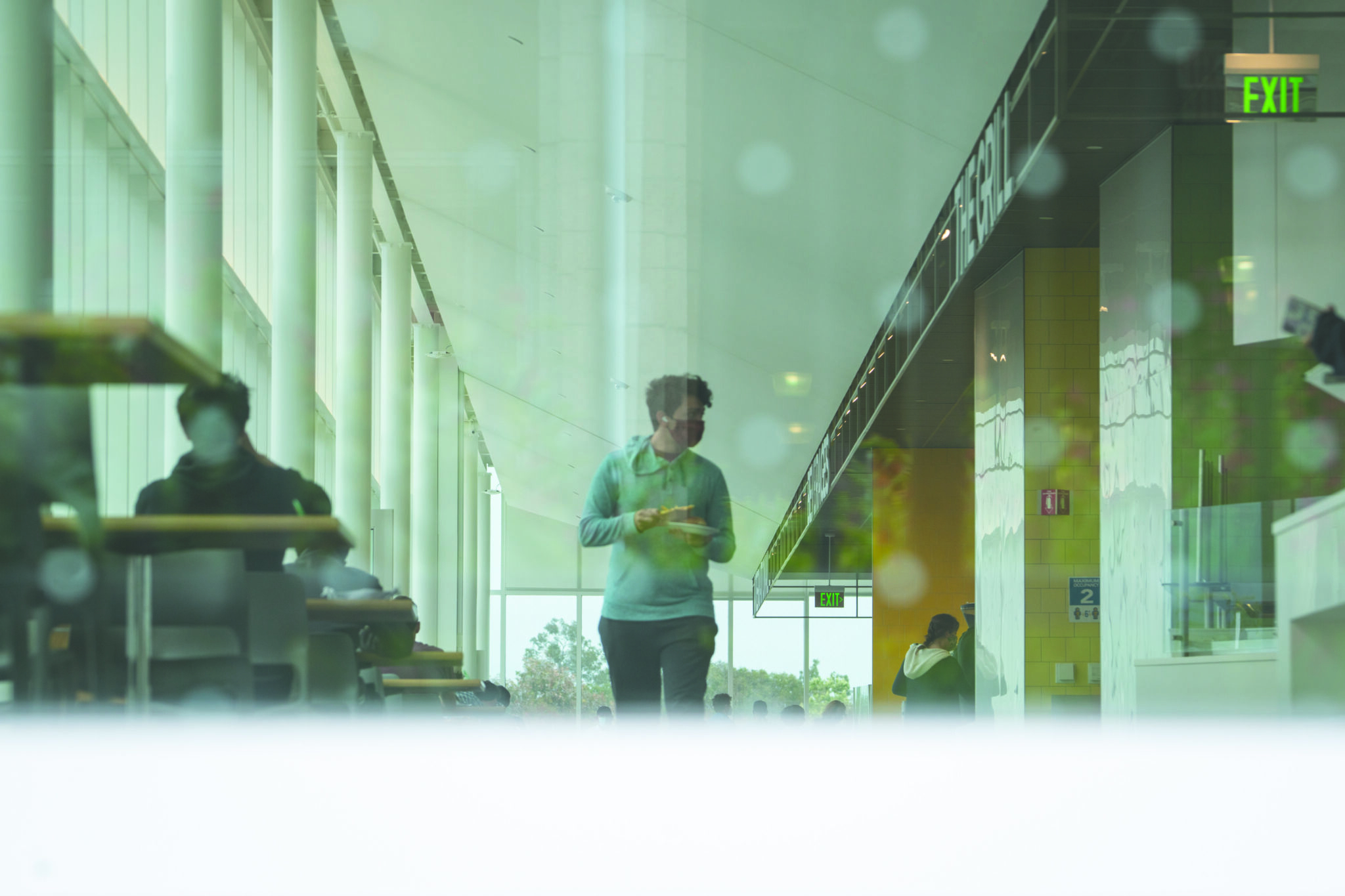 The newest campus amenity to open is the Portola Dining Commons, which began offering in-person dining on April 26 for students living in the campus apartments. Students are required to wear a mask and display their green badge and sanitize their hands upon entry. They can then pick up a meal of choice and sit down with up to three people at one table.

Unlike the library and Rec Cen, which are open to all students, the dining commons are limited to students living in campus housing, primarily first and second years. First-year pre-political science major Illyana Cannon said she went to the dining hall the first day it opened and has eaten there nearly every day since, encountering and interacting with other students in the process.

“I actually see people on campus now and there’s interactions here and there. I’ve had people come up to me and I’ve made new friends,” she said.

Cannon said she was slightly nervous to see “life change back to normal,” though she felt safe dining indoors with protocols in place and enjoyed meeting other students.

First-year data science and statistics major Alex Roginski echoed Cannon’s feelings around indoor dining, as a student living in the university apartments who had been eating takeout from the dining hall since arriving at UCSB.

“It felt so foreign. I was like, “Wait, I just take this plate, and I eat it inside?” Roginski said. “The first few days, it felt very uncomfortable.”

Roginski noted that he felt closer with his peers after being able to see both familiar and unfamiliar faces in the same dining area, but the dissonance in experiencing something so “normal” during a pandemic felt unfamiliar and strange.