The Daily Nexus
Self Study
Bananas, Bimahs and Biology: On my Chinese and Jew-ish Experience
May 22, 2021 at 6:03 pm by Toni Shindler-Ruberg 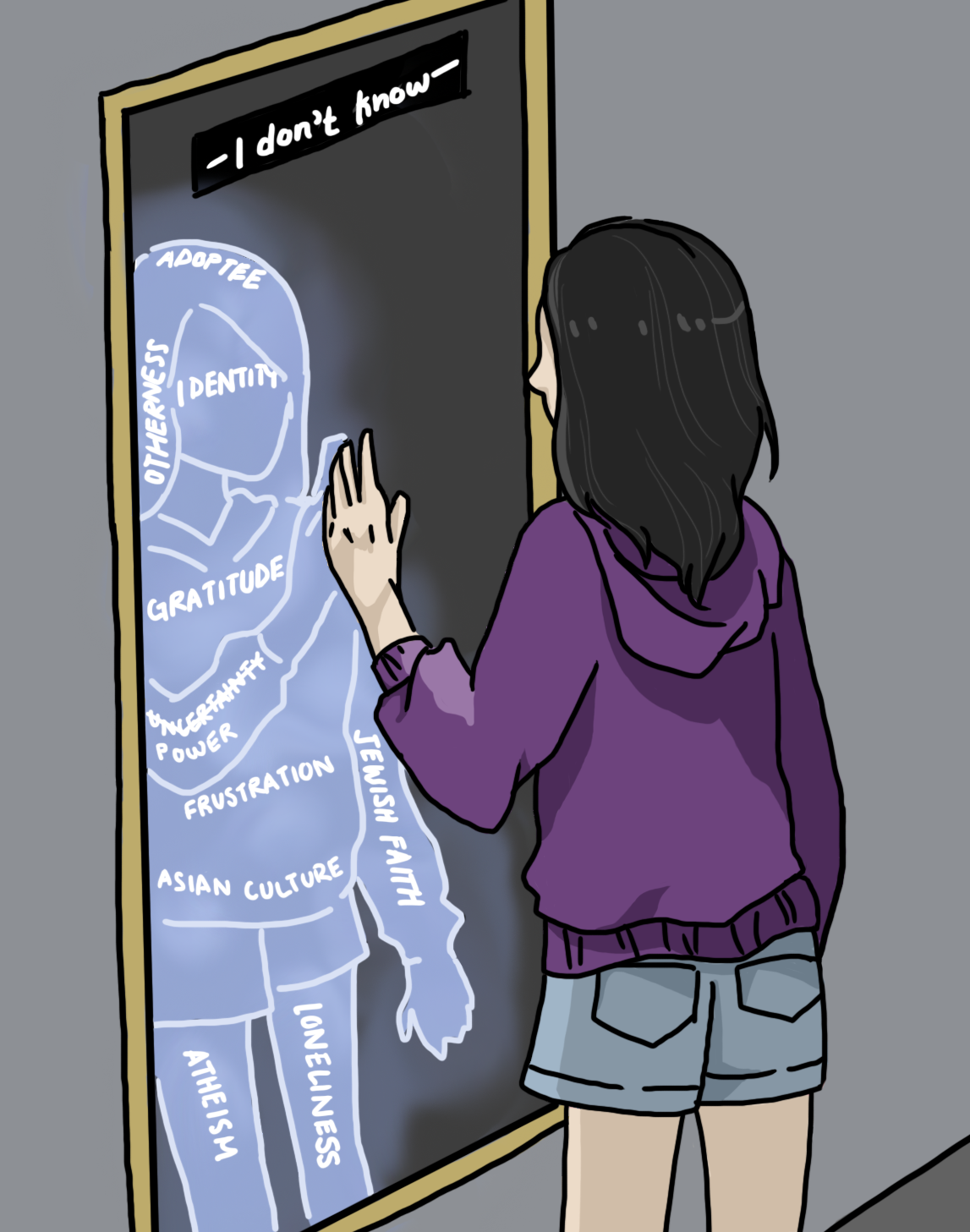 As an atheist Chinese adoptee raised in white suburbia to white parents of Jewish and Protestant faith, “I don’t know” has become a staple in my vocabulary.

Any time I try to put my experiences with Asian culture, the Jewish faith or my identity into words, an emptiness crawls across my sternum and burrows beneath my ribs.

It’s the same numb flood that came over me when I looked out from my synagogue’s bimah into a sea of congregates that looked nothing like me on the morning of my bat mitzvah or when that stranger pointed to 7-year-old me on the street and whispered to my mother, “Adopted? Oh she must be so smart.” It’s the same hollow pit that drops out from within me when a person blinks oh-so-sweetly and suggests I should try finding my birth parents.

Do I have a claim to either my Asian or Jewish heritage? I don’t know.

I continuously wrestle with a sense of cultural inadequacy, I’ve spent my whole life pressured to define my identity in terms I thought other people would understand and believe. I described myself in stereotypes which were an easy way to make my existence — years of confusion, doubt, anger, uncertainty and loneliness — into self-deprecating, palatable descriptions for others. I’m still not sure which came first — my loneliness or my anger.

It was hard being one of the only Asian children on the playground. When kids talked about the Bible or having to go to church on Sundays, I bit my tongue. I didn’t want anything else setting me apart. I used to joke about being a “bad Asian” — a violin-playing banana. White on the inside, yellow on the outside. For more than five years, I refused to wear the color yellow.

I shamed myself for not fitting in. I measured myself, my existence and my worthiness, by everything I wasn’t. Faith made me uncomfortable. Difference made me lonely.

My parents were completely transparent, supportive and educational about adoption. I understood my situation and I’m sure I understood the concept of gratitude before I could articulate such things. The questions still rolled in. Why was I left on the concrete steps of that rural orphanage? Was I unwelcome? And once: Did my family miss me? Ultimately, my anxiety led me to one question: How can I relate to a community that let me go?

For a short while, I clung to religion. Surely, the all-knowing and divine God would care for and accept each soul. And despite the welcoming arms of my congregation, I still felt like an outsider. We were all well aware of the fact that I was one of the only Asian Americans in the entire congregation. I knew I was different. They knew I was different.

I continuously wrestle with a sense of cultural inadequacy, I’ve spent my whole life pressured to define my identity in terms I thought other people would understand and believe.

But it wasn’t the knowing that separated me. It was the effort. The exaggerated effort to brush aside my differences as negligible to my relationship with God. The effort to pretend like I fit in, even when I didn’t.

But in my wonderfully self-contradictory fashion, I didn’t want to fit in like that. I didn’t want one part of my identity erased to make room for adherence to another.

Those damn “choose your identity” checkboxes on surveys are the ultimate reminder of my intersectionality — an overlapping, tangled mess of cultural threads.

Do you identify as: Asian? Yes. Hopefully. I don’t know.

Which best describes your faith: Jewish? Yes. Sort of. In a cultural context, yes. I don’t know.

The world defines the minority experience by trauma and hardship. I felt like my claims were unjustified.

I am beyond grateful for all the opportunities adoption has given me — a house, food, education, family … The Jewish faith has given me a community and instilled a deep commitment to self-betterment and education. But I also recognize the immense privilege of my circumstances.

I’ve gotten to where I am in life because of aid from the privileges of moderate, white generational wealth. My proximity to whiteness has given me a platform from which I can support others, but also separates me — physically, linguistically and psychologically — from other communities.

Sometimes I wish I could neatly fit into a box, without hesitation or reservation. There’s the “other” box, but the minority experience is already one of otherness. I understand the attempted gesture, but I highly doubt anybody could describe their otherness within the allocated character limit. For me, the “other” box is simply another time I have to justify my appearance, my family, my feelings. It’s one thing attempting to internally confront my identity, but displaying, performing and assigning descriptors to myself for others is quite another.

In a year of increasingly public and brazen anti-Asian and anti-Semitic discourse and violence, in some twisted way, I feel closer to these two communities than ever before. I’ve never heard so many voices raised together. I’ve seen people who look like me or look nothing like me share stories of otherness, togetherness, loneliness and anger.

It’s human nature to divide, classify and clarify. We are afraid of uncertainty, of indefinite things. Life would be so much simpler without nuance, without minute descriptions and designations to neatly categorize the self.

The diversity of human life is just that, diverse. Definition may bring some peace of mind and clarity. But you don’t have to define anything, and certainly not on other people’s terms.

I am no more or no less because of the languages I (don’t) speak, my precise religious beliefs, what my family looks like, a hesitancy to let others in on the nuances of my life or my new refusal to justify my existence for others.

The fluid uncertainty of identity isn’t a mistake or a deficiency. It’s my power.

Does it matter? I don’t know.

Toni Shindler-Ruberg doesn’t know what else you would possibly want to know about her.