In the rising use of renewable energy sources in the United States, solar generation is projected to consist of 48% of total renewable energy by 2050, according to the Center for Climate and Energy Solutions.

Mark Turiansky, a graduate student who is part of a research group headed by materials professor Chris G. Van de Walle, says that to ensure this growth, the efficiency by which solar energy is collected must be maximized. Materials, namely the use of perovskite crystals in solar cells, are an essential component of that goal. 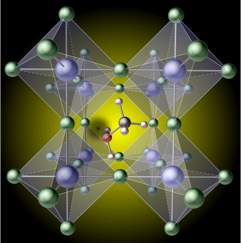 A photo of perovskite. Courtesy of Xie Zhang

Van de Walle’s group has spent many years applying computational techniques to study different materials for collecting solar energy. Dr. Xie Zhang, a postdoctoral researcher in the group, led this project. Specifically, they’ve studied recombination processes in semiconductors, where they analyze what happens to an excited electron in the semiconductor to see if it produces light or heat. In this instance, they sought to optimize the production of light in a solar cell, while minimizing the production of heat. The material they focused on was hybrid perovskites, consisting of the perovskite crystal itself as well as the incorporation of inorganic atoms.

“These hybrid perovskites have attracted a lot of attention because they are very low-cost to synthesize, and more importantly, they’ve been used to create solar cells with remarkable efficiencies,” Turiansky said. “They’re even rivaling the efficiency of silicon-based solar cells, which are the current state of the art.”

With this knowledge of the material’s potential, the team applied their methodologies to build a foundation and understand the perovskite itself, as well as its use. Rather than running experiments in a lab, the team performed computational research, running calculations using supercomputing resources provided by the National Energy Research Scientific Computing Center.

Turiansky said their work was also from “first principles,” meaning that they did not fit to experiment — rather, they derived their numbers by solving the quantum mechanical equations that describe how electrons behave in materials.

In their research, the group found defects that were limiting the efficiency of the solar cells. Experimentally, they could not find what those defects were. So, they used calculations to study candidate defects that could explain what had been seen.

“We came across something novel, a hydrogen vacancy,” Turiansky said. “Most studies treat the organic molecule as an inseparable unit, but we found that it’s very possible to break off a hydrogen atom [from] these molecules.”

Their calculations quantitatively showed that this vacancy, according to Turiansky, explained the experimental observations and was a major source of efficiency loss. They also surveyed a second hybrid perovskite with formamidinium compounds and found that hydrogen vacancies were less problematic in that material. Thus, they found that alloying the perovskite with formamidinium rather than the original methylammonium increased the efficiency of hybrid-perovskite solar cells.

“This is a major highlight of our work,” Turiansky said. “Not only can we interpret and explain experimental observations, but we can predict and find new promising research directions using our calculations.”

The Van de Walle group’s work is, Turiansky said, a very important step toward increasing the efficiency of solar cell devices. Their results suggest modifying synthesis conditions to minimize hydrogen loss by alloying the perovskite with materials not prone to hydrogen vacancy formation, like formamidinium is.

“With this discovery, hybrid perovskite solar cells may very well become the leading low-cost, high-efficiency solar cell material,” Turiansky said. “It may not be long before people are putting hybrid-perovskite-based solar cells on their roofs.”